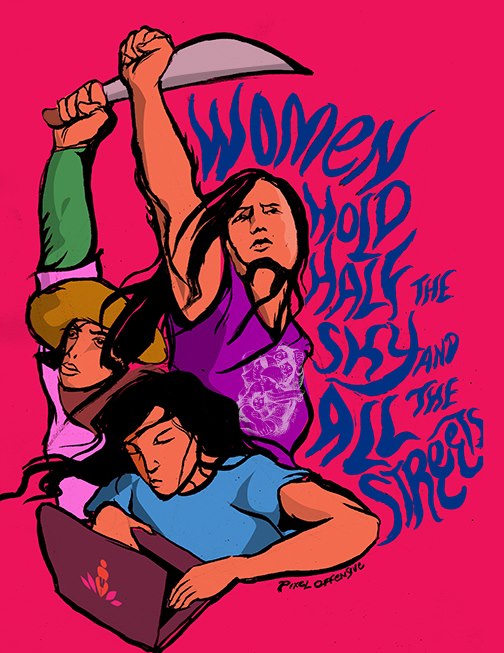 This month, progressive Filipinos under the banner of BAYAN-USA celebrate all the women of the world that hold up more than half the sky. Today, BAYAN-USA is taking a stand to end violence in all shapes and forms against women and children! To do this we must target the root causes of this violence and attack the structures in place that perpetuate this culture of violence. The violence upon women and children in the Philippines can be seen through various mechanisms put in place by the government that are purposefully oppressive and exploitative of the population. We must defend women’s physical and mental health and rights to be free from torture and violence. Any violation of these rights is a crime!

State Repression IS Violence Against Women
State repression manifests itself through the thousands of extra-judicial killings that have occurred over decades due to corrupt politicians and their desires to maintain state control through force. Just this past week, the murder of Barug Katawhan leader and Typhoon Pablo survivor Christina Morales Jose by an unidentified motorcycle riding assassin in Baganga, Davao Oriental, added another victim of state repression to a growing list of martyrs of the people. Instead of providing relief to the thousands of victims of Typhoon Pablo, the Philippine government militarized the relief operations conducted by the 67th Infantry Battalion of the Philippine Army, creating a food blockade. Jose, among the 4,000 people from Compostela Valley and Davao, two heavily devastated areas experiencing the hardships of the typhoon’s aftermath, mobilized to office of the Department of Social Welfare and Development to obtain and distribute the food aid that was promised to them. Days later, Jose was assassinated for her organizing work that empowered the people to rise against state oppression.

State violence can also be felt by the thousands of migrant women who are torn apart from their children and families because of the Philippine government’s Labor Export Program (LEP), which commodifies its people as the country’s number one export. The Philippines has come to be known as the world’s largest exporter of women who make up 70% of the 4,500 migrant workers that leave the Philippines daily. It is all the more important to have genuine comprehensive immigration reform in the United States to protect the rights of migrants and immigrant women. The recent passage of the Violence Against Women Act 2013 by both the Senate and House of Representatives in the United States will provide protection for immigrant women, LGBT and tribal victims. However, it does not fully address these systems of violence upon women.

Dismantling Violent Structures
Legislation alone will not alleviate the root causes of migration from the Philippines. We must recognize the role and impact that US imperialism, government corruption, and feudalism have in perpetuating the below poverty social state of the Philippines. The greedy politicians and landlords own and control the wealth of the country and continue to appease the United States in order to maintain that power and wealth, at the cost of the 99% of the population. The lack of national industrialization and genuine agrarian reform towards national self-sufficiency is due to the fact that it is not in the interest of the United States nor the wealthy 1%.

Today BAYAN USA joins all women around the world who are uniting to END violence against women, to DEMAND justice for all victims of human rights violations, to SPEAK OUT about rape, domestic violence, and torture. Together we can dismantle and destroy these violent structures and tear down the global exploitative capitalist system! We stand shoulder to shoulder with the people who have fought for their basic rights. We continue the struggle for women’s liberation and for all future generations to live in a world free from oppression!