The widespread fraud and systemic voter disenfranchisement that plagued yesterday’s elections in the Philippines exposed an ugly truth: in a system that favors the ruling elite at its core, elections will be used as a tool to strengthen conditions of tyranny. In order for the masses of Filipino people to ever participate in free and honest elections, we must start with ousting the festering US-Duterte regime.

In addition to age-old political dynasties buying their way through this election, as expected Duterte used all the dirty tools in his arsenal to ensure outcomes that favor him: spending government funds to support candidates from his cabinet including generals from Operation Tokhang that led the campaign to kill more than 30,000 people from urban poor communities; using police officers to distribute fake newspapers that accused progressive candidates and partylists of being communist fronts; texting of death threats to members and supporters of opposition candidates; and armed intimidation of voters and volunteers at polling places. With more of his loyalists taking office in the Senate, Duterte can ensure his implementation of a perpetual war on the people, leading to more extrajudicial killings and human rights violations of thousands of urban poor, peasant farmers and indigenous people. With the House and Senate in his pocket, Duterte is positioning himself to stack up enough votes to railroad charter change (or cha-cha) to remove term limits for the presidency, solidifying his fascist dictatorship over the Philippines, much like his idol, Ferdinand Marcos did in 1972.

There is too much at stake to allow these elections to pass without protest. Just as people rose up to remove a fascist dictator like Marcos in 1986, we too must rise up, join with the broad masses of people angered by the sham democratic process of elections, and throw Duterte out. And then, we must continue building our power to usher in genuine lasting change that uproots the rotting semi-feudal and semi-colonial system altogether, and moves the Philippines towards a socialist system that upholds national sovereignty, invests in sustainable national industries and agrarian reform, and provides living wages and ample employment for all people.

End US Support to the Duterte Regime!

No to Charter Change! 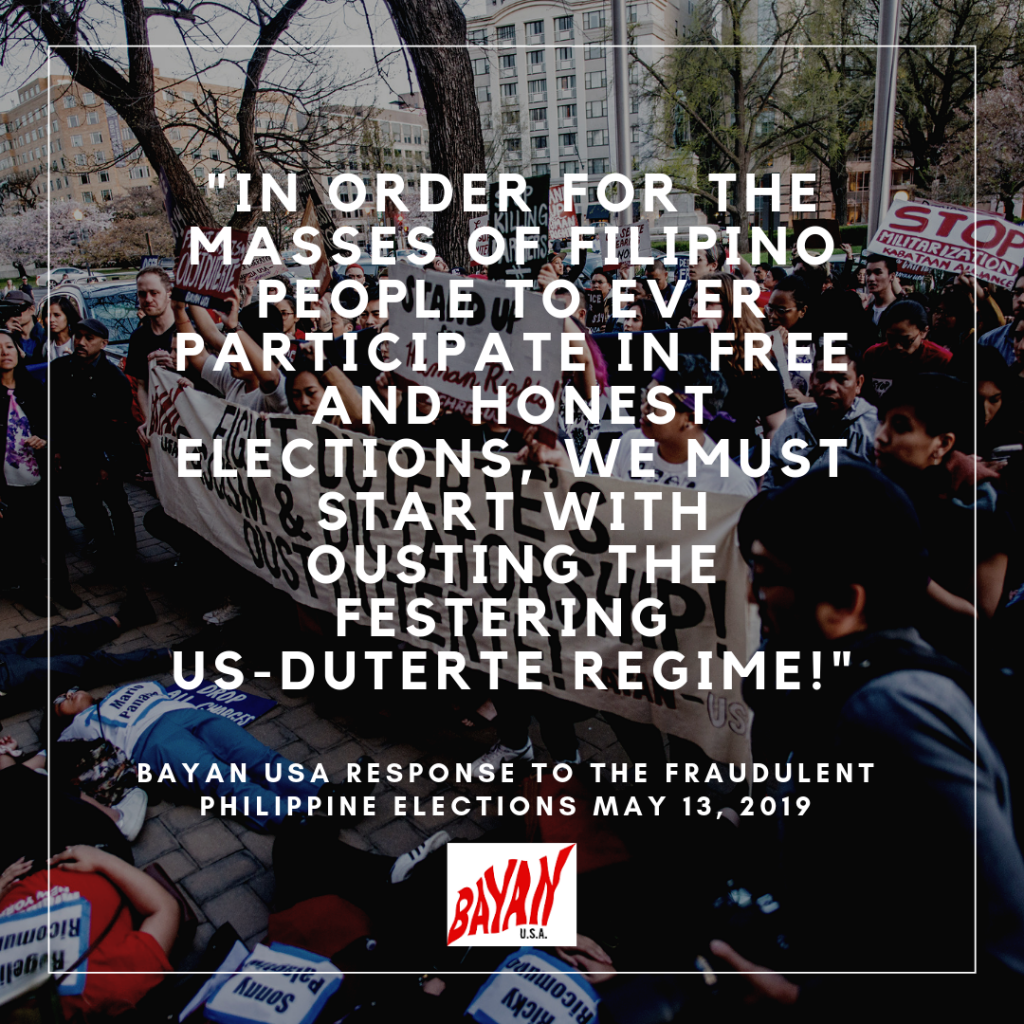