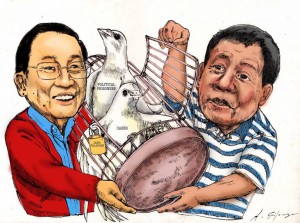 “With the inauguration of Rodrigo Duterte as President of the Philippines, we look forward to an opening to push for positive changes needed in the government and its policies. But no matter who is president, it is the people, united in collective action, that are the true agents of change! We must work to unite with and engage the incoming administration to truly depart from traditional Philippine politics and walk a pro-people, pro-sovereignty path,” stated Bernadette Ellorin, Chairperson of BAYAN USA.

June 30, 2016 marks the much-anticipated end of the Aquino regime, which throughout its term has exposed its corrupt, criminal, and anti-people nature. Among Aquino’s many failures are his lack of response to the most devastating typhoon to ever touch down on land–Typhoon Haiyan/Yolanda which reached a death toll of more than 6,000 people.  The lack of immediate relief and proper distribution of aid was due to government corruption by the Aquino administration. Aquino will be remembered as the Pork Barrel King, aptly dubbed due to his administration’s own practice of corrupt schemes such as the Priority Development Assistance Fund (PDAF) in the legislative branch and the Disbursement Acceleration Program (DAP) in the executive branch.

The Mamasapano Massacre, one of the Philippine’s deadliest military blunders with direct guidance from the United States FBI, made international headlines as more than 60 people were unnecessarily killed, with Aquino denying his role and responsibility in the massacre. Aquino has also aided and abetted the 318 extrajudicial killings committed under his regime, by stubbornly pushing his counter-insurgency program Oplan Bayanihan.

“Good riddance! The Aquino government is a criminal administration that should have ended a long time ago. Aquino himself should be held accountable for his crimes committed as Chief Executive during his term,” continued Ellorin.

“As mayor of Davao City, Rodrigo Duterte enacted many pro-people policies and opposed US intervention in Mindanao. We join the Filipino people’s clamor calling on President Duterte to continue this posturing as president and to truly distinguish himself from his predecessors by arresting Aquino; enacting economic and political policies that uphold economic self-reliance, national sovereignty, and social welfare; and discontinuing pro-neoliberal policies that enforce neocolonialism by prioritizing US and foreign corporate interests over the Filipino people. We especially welcome Duterte’s push to renew formal peace negotiations between the National Democratic Front of the Philippines and the Philippine government. These negotiations, which have been the target of sabotage by both the Aquino and Arroyo administrations, aim to address the roots of the armed conflict–poverty, landlessness, and joblessness.”

With Duterte’s appointment of known progressives and mass movement leaders Rafael “Ka Paeng” Mariano as Secretary of the Department of Agrarian Reform, Dr. Judy Taguiwalo as Social Welfare Secretary, and Joel Maglunsod as Labor Undersecretary, there is greater potential for pro-people policies, but this must still be achieved with the mass movement taking the lead.

“These are exciting times for the Filipino people, and everywhere around the world people are watching closely at what this president will do. The demonization tactics of the Western media is proof that he is already ruffling the feathers of the U.S. government, which could be a prelude for destabilization if Duterte pushes through with an independent foreign policy,” stated Ellorin. “While we support the general direction President-elect Duterte is going, we must continue to engage him to depart from neoliberal economic policies. We join the Filipino people in guarding against US destabilization and will continue to build a strong mass movement for fundamental change in the Philippines!”

BAYAN USA believes the mass movement has an exceptional opportunity to engage the incoming Duterte administration in advancing a genuine People’s Agenda.  We urge President-Elect Duterte to take action on the following six major priorities during his first 100 days in office: