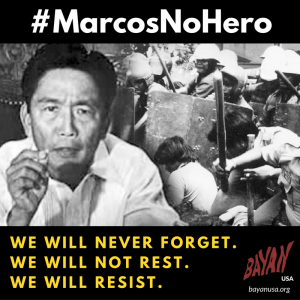 BAYAN USA joins the Filipino people in our utmost condemnation of the secret and cowardly burial of the late fascist dictator Ferdinand Marcos yesterday by the Duterte administration at the Libingan ng mga Bayani or LNMB (National Heroes Cemetery) in Metro-Manila.

The manner in which the burial took place shows the cowardice, opportunism, and anti-people character of the Marcos political dynasty, as well as the collusion of the Duterte administration and the Philippine Supreme Court, in thinking they could undermine the Filipino people and avoid massive protest and condemnation.

They are wrong. We will never glorify a fascist.

Not only are the Filipino people protesting and resisting this latest atrocity and injustice of the Marcos’ family and their apologists to proclaim the late tyrant a hero and rewrite history, but we will resist their rabid ambition to cling to political power, to whitewash their crimes, to keep the billions of ill-gotten wealth stolen from the Filipino people, to remain unaccountable to the victims of Martial Law, and to eventually return to Malacanang.

There are scores of Filipinos who fled to the US in the 70’s and 80’s because of the tyranny of Martial Law. The wounds run deep. They have not healed.  And each subsequent regime following Marcos–from Corazon Aquino to Rodrigo Duterte–must be held accountable for their part in failing to hold the Marcos family accountable and ensure justice for the Filipino people.

The Martial Law years in the Philippines also saw a strong pro-democracy voice cry out from the United States. This voice rises up again as one with the continuing protests in the country for justice and accountability for the victims of Martial Law and continuing state repression and impunity in the Philippines. BAYAN USA calls on our member organizations, friends, and supporters to take action.

We will never forget.

We will not rest.

Until Marcos is exhumed, held accountable for his crimes, and justice is served.

As with the People Power Uprising that deposed Marcos from Malacanang in 1986,

Our fight remains on the streets.