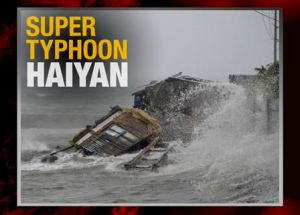 BAYAN USA urgently appeals to you and our communities to help the victims of Super Typhoon Yolanda (international name Haiyan), a typhoon that has been described as perhaps the strongest storm ever to make landfall in recorded history. We ask all BAYAN USA members, allies, friends, and family to donate online today to National Alliance for Filipino Concerns (NAFCON) Bayanihan Relief of which 100% of your donations will be given to BALSA (Bayanihan Alay sa Sambayanan). BALSA translates to RAFT (People’s Cooperation for the People). For more information on how to donate visit NAFCON website. Read more about NAFCON’s relief efforts on NBC NEWS Blog here.

Super Typhoon Haiyan first roared onto the Philippine’s eastern island of Samar at 4:30 a.m. Friday delivering 195 mph winds with gusts reaching even 235 mph. Thousands of the victims come from peasant, fisherfolk, and indigenous peoples in the Visayas, some parts of Mindanao, including Southern Luzon. “The destruction is massive – beyond our collective imagination,” stated Rita Baua, BALSA National representative.

140 deaths have been confirmed so far, but unconfirmed estimates have reached at least 1,200 dead. The Social Welfare and Development Department reported that the storm affected 4.28 million people in 270 towns and cities spread across 36 provinces in Central Philippines. Super Typhoon Haiyan packed a blow on Philippine structures 3.5 times more forceful than Hurricane Katrina in 2005.

BALSA is a grassroots relief and rehabilitation organization of BAYAN for more than a decade. It is run by people for the people, eliminating gross administrative costs and ensures your donation contributes directly to the communities that need immediate assistance. Furthermore, BAYAN advocates have and continue to expose the Aquino Administration and Philippine Congress’ Priority Development Assistance Fund, which contain $141 Million (1.3 trillion to 1.5 trillion in Philippine pesos) for misusing government funds.

Just last August 26, tens of thousands of Filipinos in Manila participated in a “Million People March.” The protesters at the march, organized by BAYAN, pressured government officials to stop corruption, and instead, allocate misused funds towards social services and natural disaster preparedness.

Watch this video of BALSA at work during previous relief efforts.