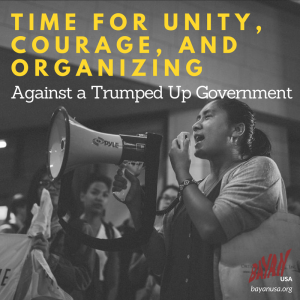 President-Elect Donald Trump confirms the true conditions of the Unites States. A capitalist country that places the interest of corporations and the 1% of the population that controls the wealth above the overall basic needs of the majority of people living in this country. A racist country that promotes the violent police state in communities of color with impunity. The continued xenophobic anti-immigrant and anti-muslim culture that heightened as a tactic of the Bush regime to expand the US war machine under the guise of “the War on Terror.” BAYAN-USA adds our voice to the millions of people angered by this Presidential election and denounces the status-quo system and the rising fascism.

Trump was able to appeal to large number of the population feeling the brunt of neoliberal policies that have led to the outsourcing of jobs, low wages, housing crisis, and widespread unemployment.

“The fear tactics Trump used to win his campaign have heightened the divide in this country, but we must remember who our real enemy is, and it’s not with the people who voted for Trump, but to target the US capitalist system that enriches oligarchs and monopoly capitalists like Trump and oppresses the majority of the people,” Jessica Antonio, Secretary General of BAYAN USA.

In this time, it is the opportunity for the people to generate the opposite of fear: Courage.

BAYAN-USA joins the millions of people throughout the U.S. who are demanding an alternative to the business-as-usual politics of not only Trump but the system itself which caused the massive income inequality, global war zones, and systemic violence and repression we face today. Fundamental change in the US is never going to be delivered by any candidate who represents US imperialism.  It is only through the organized and unrelenting struggle of the mass movement that we will ever eradicate the roots of poverty, inequality, war, and injustice.

BAYAN-USA reiterates its commitment to organizing for genuine change in solidarity with the 99% as the only lasting solution to the current economic and political crisis in the world.  We must continue to build an anti-imperialist struggle to resist Trump’s pronouncements to reverse the Deferred Action for Childhood Arrivals (DACA) program, deport 11 million migrants and refugees, reinforce the US-Mexico border, and deny entry to thousands of Muslims.  These threats only serve to scapegoat already marginalized communities for the crisis of capitalism.  We also urge President Duterte, who remains a target of intensifying destabilization schemes, to live up to his bold declarations to chart an independent foreign policy that is not beholden to U.S. imperialist dictates, which we have no doubt will be pushed further by Trump. Now is the time for unity, organizing, and collective action!