Struggle for Philippine Sovereignty and Democracy, Denounce the Betrayal of the US-Duterte Regime!

On the 120th anniversary of the victorious Philippine revolution against more than three centuries of brutal colonial rule under Spain– the first anti-colonial revolution in Asia against a Western superpower–  BAYAN-USA joins the broad masses of everyday Filipinos bearing the brunt of the crisis-ridden Philippine economic and political system in fighting for an end to our nation’s subservience to the dictates of foreign superpowers over the democratic interests of the Filipino people. Contrary to its original promises, the US-backed Duterte regime has only intensified this crisis and must be exposed for the traitorous liar it really is.

BAYAN-USA joins the worldwide condemnation of the Duterte regime for its gross human rights violations against the Filipino people, including more than 20,000 dead from extrajudicial killings; its abuse of executive powers and fascist acts against democratic institutions; and its abhorrent display of misogyny and male chauvinism among other things. But perhaps the greatest betrayal of the people’s aspirations for sovereignty has been Duterte’s moves to further open up the Philippine economy, as well as land and sea territories, to the unbridled economic interests of both the US and China, as well as tightening the stranglehold of US military presence in the country.

While the Philippines is the 5th most mineral rich country in the world– with over $1 trillion in untapped natural wealth in Mindanao alone– the majority of Filipinos still live in abject poverty and hunger. Sixty percent of Filipino households live under $2 a day. The dearth of viable jobs forces over 6,000 Filipinos to leave the country daily in search of work abroad. Those who stay are hit with excessive taxes which go to the pockets of the rich instead of services for the masses. The socio-economic crisis suffered by the Filipino people has reached new heights as Duterte continues to cling onto the neoliberal economic policies of his predecessors, proving he is not an agent of change but in fact a proponent of the status quo– the rule of reactionary traditional politicians who have kept the country mired in semi-feudal, semi-colonial purgatory, chained to a bankrupt system that prevents genuine self-reliance and sustainable development for the benefit of its people.

In addition, Duterte has maintained martial law in all of Mindanao and threatens to extend martial law across the whole of the Philippines, claiming that there is “no difference actually between martial law and a declaration of national emergency.” He continues to cite “lawlessness” as an excuse to abuse his power and rise toward full-fledged dictatorship, when in actuality he is the criminal-in-chief committing rampant human rights violations against the people. Duterte’s streak of removing his opposition from any position of power is a move to consolidate control of the government in its totality.

We join the Filipino people in struggling to continue the unfinished revolution of 1898, which sought the genuine national liberation of the Philippines from a colonial master. For this to be possible, the people must unite and struggle against the current rotten, fascist and murderous traitor in Malacanang, just as the Filipino people did back in 1986, and again in 2001.

It is clear from our history that change is not borne from presidents or leaders, but from arduous and valiant people’s struggle, which is the real legacy of the Philippine revolution to be celebrated today. 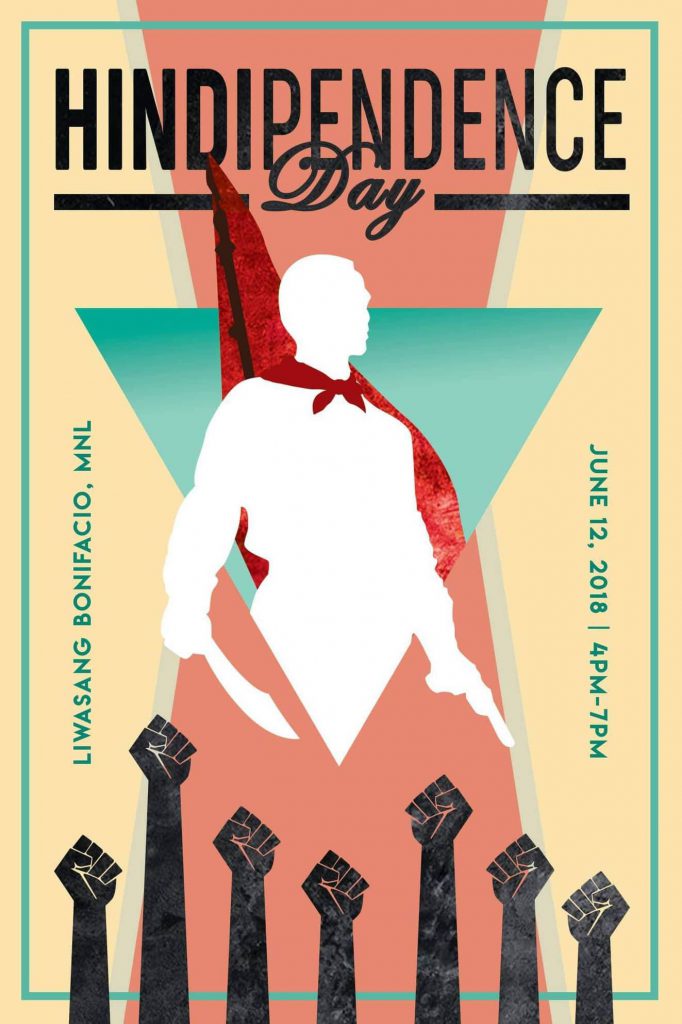 #HINDIpendence Day Action in the Philippines