Stop US Support for State Terror,  Repression, and Impunity in the Philippines!

On International Human Rights Day, BAYAN USA joins the millions of people across the globe in fighting for human rights. We salute the courageous people worldwide rallying in the streets to protest anti-police violence upon Black communities, xenophobic policies that target migrants, and fascist tactics that criminalize dissent. We join together with people all over the world who aim to strengthen the people’s solidarity and intensifying the struggle against imperialist plunder, crisis and war.

The fight for human rights in the Philippines has intensified with the closing of the current president’s term and the opening of the national elections. Under the current President of the Philippines Benigno Aquino III, there are 294 documented cases of extrajudicial killings, 110 cases of torture, 28 enforced disappearances, and 723 cases of illegal arrest and detention, according to the Philippine human rights group Karapatan. Under the US-designed counter-insurgency program Oplan Bayanihan, the Philippine military and paramilitary have terrorized the indigenous Lumad communities in Mindanao. Most recently, the Philippine military forced the evacuation of more than 63,824 people, displacing Lumad communities from their ancestral land and livelihood. Military occupation and attacks on Lumad schools have left many families to mourn the deaths of their community leaders, such as Dionel Campos, Bello Sinzo, and Emerito Samarca who were murdered by paramilitary elements on September 1st, 2015. 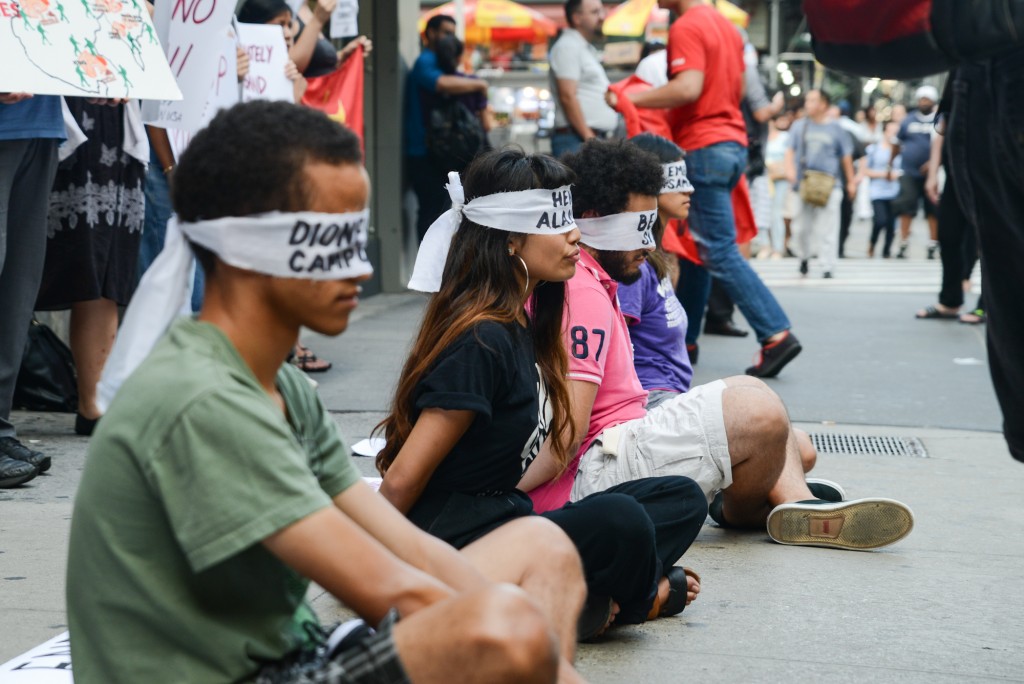 “Their deaths sparked an international movement to fight for the rights of the Lumad and to demand the Aquino regime to stop the killings and to end the military occupation of schools for the sake of the children,” stated BAYAN-USA Chairperson Bernadette Ellorin.

“The approval of the EDCA and the increase in US aid to the Philippines will result in an increase in violations of Philippine sovereignty and US imperialist control of the Philippines,” said Ellorin. “We’ve already seen what can happen to Filipinas such as the rape case of Nicole and the brutal murder of Jennifer Laude. US Marine Daniel Smith, despite being convicted by Philippine courts, was ultimately protected by the VFA and eventually released. US Marine Joseph Pemberton, was recently convicted of homicide, but is still in a US controlled facility despite the court ruling that he be turned over to Philippine authorities.” stated Ellorin. “The Philippines and US are even proposing to build a special US facility within Camp Aguinaldo to house Pemberton. This just shows how little power the Philippine government has against its imperialist masters.”

Unite and Fight for Justice!

Join BAYAN USA in actions and events in various cities across the US this week! We are also calling upon people to print and send postcards to government representatives telling them your demands, take a photo and post them online!  You can also join NYCHRP and BAYAN USA in the social media blast to demand that the U.S. Congress, as it votes on the federal budget, cut military aid to the Philippines. Tweet your demands to members of the Congressional Budget Committee, including Scott Garrett (R-NJ), Bill Pascrell (R-NJ), and Donald Norcross (D-NJ), and members of the State, Foreign Operations, and Related Programs Subcommittee, including Nita Lowey (D-NY), Jose Serrano (D-NY), and Barbara Lee (D-CA).

“We cannot rely on the government to protect human rights, when they are the main perpetrators of human rights violations against the people!” stated Ellorin. “State violence is government terrorism against its own people. We see that with the attacks on Black communities here in the US and the level of impunity of the Philippine government. It is time to link together where our struggles meet and to unite on the basic fight for humanity. It is our right, and it is our duty to be the force that changes the way the world functions with monopoly capitalism at its core to a world that reflects the majority and genuinely serves the interest of the people!”

US out of Philippines and Asia Pacific!

HUMAN RIGHTS AND JUSTICE FOR ALL!