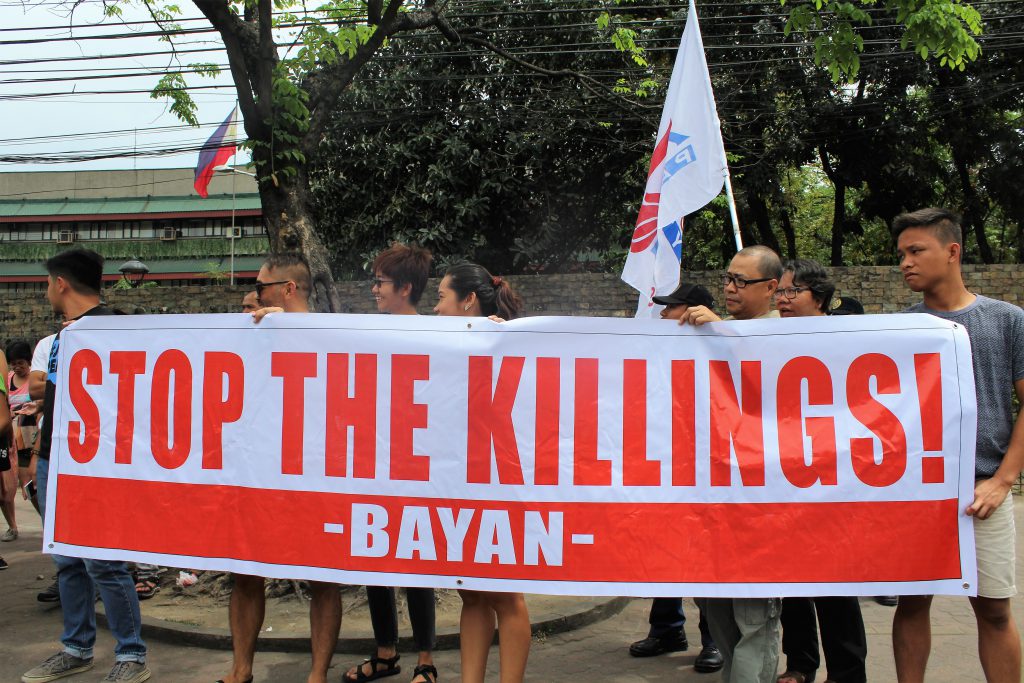 BAYAN-USA welcomes the news that the National Democratic Front of the Philippines (NDFP) and the Government of the Republic of the Philippines (GRP) have forged an agreement to continue formal peace talks this April 2-6. We applaud the Filipino people and our allies worldwide for tirelessly clamoring for peace rooted in justice and long-term solutions to the crisis of poverty in the Philippines. The people’s perseverance has compelled the two parties to continue the peace talks, despite the many challenges faced along the way and to be tackled in the weeks and months to come.

At the same time, BAYAN-USA condemns the sharp escalation in human rights violations committed by the Armed Forces of the Philippines against poor communities and activists affiliated with the national democratic movement. The military’s extreme operations, under the deceitfully-named counterinsurgency program Oplan Kapayapaan (Operation Plan Peace), undermine the success of the peace talks. For example, since the inauguration of President Duterte last July, 43 activists have been arrested on false charges and 39 have been killed–20 of them since January and 16 since the government’s declaration of “all out war” on the New People’s Army. This is on top of the 7,000 people killed in the so-called “war on drugs.” Tens of thousands of residents of rural communities such as Sitio Tangis, Barangay Datal Anggas in Alabel, Sarangani and Pichon Village in Caraga, Davao Oriental have been bombed by the Philippine Army, and others have been forcibly evacuated and occupied by the military and paramilitary forces.

The Duterte administration must rein in its armed forces, paramilitary and police, terminate Oplan Kapayapaan, and terminate its war on drugs in order to create a climate conducive to successful negotiations. The GRP must also keep its promises to uphold previously signed agreements with the NDFP and release political prisoners, if its stated commitment to peace is to be taken seriously.

BAYAN-USA looks forward to the next rounds of peace talks, when the NDFP and GRP will discuss comprehensive socio-economic, political and constitutional reforms. If agreed upon and implemented, these reforms can help lead to the adequate and sustainable food, shelter, health, livelihood, and development that the Filipino people seek. Getting to these roots of the armed conflict in the Philippines is the only way to ensure a just and lasting peace.

###
BAYAN-USA is an alliance of 20 progressive Filipino organizations in the U.S. representing students, scholars, women, workers, artists, and youth. As the first and largest international chapter of Bagong Alyansang Makabayan (BAYAN-Philippines), BAYAN-USA serves as an information bureau for the national democratic movement of the Philippines and as a center for educating, organizing, and mobilizing anti-imperialist and progressive Filipinos in the U.S. For more information, visit www.bayanusa.org.