Hundreds of Filipino Americans and community supporters across the US held actions and workshops in Los Angeles, San Francisco, Seattle, and New York in solidarity with the militant protest actions in the Philippines during President Aquino’s fourth State of the Nation Address on July 22, 2013. 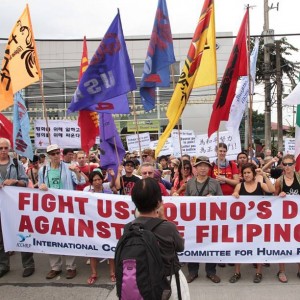 Bev Tang of the Los Angeles-based GABRIELA USA and SiGAw marched in the Philippines among thousands of protesters explaining, “The People’s State of the Nation Address reflects the real state of the country while presenting the true needs and demands of the Filipino people. We know that Noynoy’s version is just going to be all lies, just like the past presidents have done before.”

In his speech, Aquino boasted of the rise of the Philippine Tiger, referring to a slight growth in the GDP. “There is no trickle down effect!” countered Jeremias David of the National Alliance for Filipino Concerns. “The majority of our kababayan are still jobless, homeless, and hungry, forcing more than 4,500 Filipinos to leave the country in search for livelihood abroad. Aquino needs to focus on creating jobs in the Philippines to prevent family separation!”

Aquino failed to mention that remittances from Overseas Filipino Workers had reached a record-high of $21.39 billion dollars, belying his claims of economic growth and any major impact on the lives of the poor.

“What kind of country would rather push their citizens to leave the country, instead of creating a sustainable economy through national industrialization and genuine land reform? We can definitely see who is pulling Aquino’s strings to further liberalize the Philippine economy for US and foreign investors and corporations,” stated Jackie Mariano, Deputy Secretary General of BAYAN USA.

Aquino also continued his sloganeering of “Matuwid na Daan,” or “the straight and narrow path,” policy against corruption, despite the more than 142 cases of extrajudicial killings under his term.

“There was no mention of the human rights violations, or the lack-of-arrest of Jovito “The Butcher” Palparan or Gloria Macapagal-Arroyo, two major forces in the countless disappearances and abductions of activists, including the case of our fellow Fil-Am activist, Melissa Roxas,” asserted Faye Lacanilao of BAYAN USA Northern California. 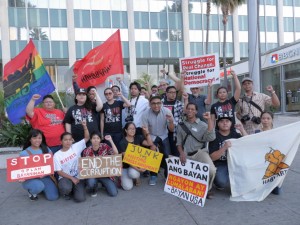 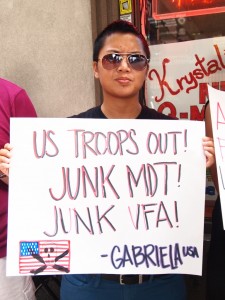 “The human rights violations will only increase with the GPH halt on the Peace Talks with the National Democratic Front, along with the open invitation for US Intervention through the existing Visiting Forces Agreement and the Mutual Defense Treaty and with the more recent talks on the Philippines- US Bases Access accord.” ### 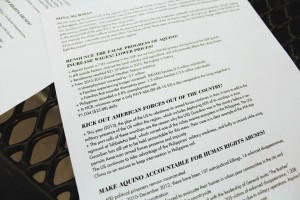