Filipinos and Allies Across the U.S. Unite to Fight Duterte’s Dictatorship 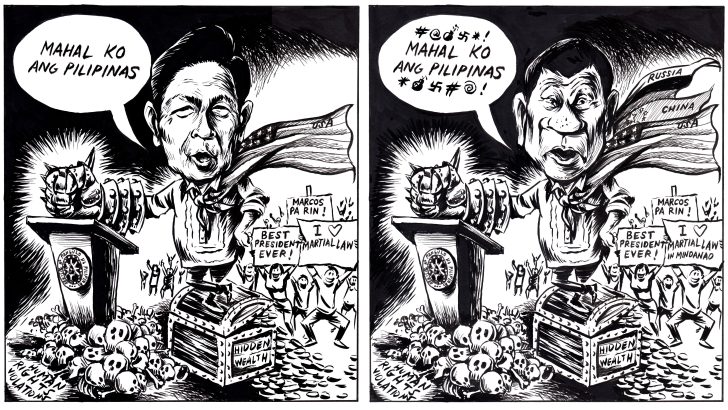 As we commemorate the 46th anniversary of the declaration of martial law in the Philippines by Ferdinand Marcos, BAYAN USA joins Filipinos and our allies across the U.S. unite to fight anew the festering dictatorship of Rodrigo Duterte. We will never forget the lessons learned from 14 years of martial law under Marcos, for the realities of the present day constantly remind us of these lessons from the past.

Duterte’s bloody wars on the poor, the Moro, the indigenous people, and dissidents today—do they not remind us of Marcos’ sweeps of activists on campuses and in barrios, wars on the Bangsamoro in Mindanao, and counterinsurgency program Operation Plan Katatagan?

The thousands of lives taken by Duterte’s police through Oplan Tokhang, the military and paramilitary through Oplan Kapayapaan, and the US-armed and advised war in Mindanao, currently still under martial law—do these not force us to remember the thousands of people martyred by Marcos, his constabulary and army?

Duterte’s attacks on the media, dirty removal of political opposition in the judiciary and legislature, ploys to change the constitution today, imprisonment of hundreds of people guilty only of being vocal critics of his regime—are they not reminiscent of Marcos’ media blackouts, disingenuous Constitutional Convention, and assassination of political rivals?

Duterte’s surrender of Philippine sovereignty for loans and financial investments by the U.S., China, Japan and instruments of neoliberalism such as the World Bank—are these not a reminder of Marcos’s Investment Incentives Law and concessions to the dictates of the International Monetary Fund?

Duterte’s economic policies, new taxes under the guise of reform and economic acceleration, unabated price increases on basic commodities, continuing contractualization of the workforce, and refusal to implement genuine land reform which are plunging the people into deeper poverty—do these not harken back to the sham economic development program and start of the Labor Export Program of Marcos?

Duterte’s open-armed welcome of the U.S. military in Philippine bases, unabated implementation of the Visiting Forces Agreement and Enhanced Defense Cooperation Agreement, and inaction on China’s occupation of Philippine land and sea territory—do these not bring back the worst memories of the Philippines being the site of the largest overseas U.S. military bases in the world?

Donald Trump’s unequivocal support for Duterte, declarations that the Philippines is the “most strategic piece of real estate from a military standpoint,” and $184 million in funding for Duterte’s wars today—how different are these from Ronald Reagan’s staunch backing of Marcos?

The recent International People’s Tribunal convicted Trump and Duterte as guilty of heinous crimes against the Filipino people and the Philippine nation. The brave testimonies of those who survived violations of human, civil, political, and economic rights remind us of the courage of the people who came forward in the Permanent Peoples’ Tribunal (First Session on the Philippines) of 1980 against the dictatorship of Ferdinand Marcos. The sharing of the verdict with the United Nations and various parliaments and governments worldwide added strong international pressure on the Philippine government to stop the killings and other gross human rights violations in the country.

The workers, students, women, journalists, teachers, peasants, faith leaders, indigenous people, lawyers, and human rights defenders who continue to speak out and fight against Duterte’s tyranny today embody the spirit of resistance of the people who fought the Marcos dictatorship for nearly two decades.

The mass mobilizations of all sectors and classes of Philippine society on International Workers’ Day, Philippine “Independence” Day, and the People’s State of the Nation Address to condemn the fascist US-Duterte regime call forth the strength and resolve of the millions of people who rose up to topple the Marcos dictatorship in 1986.

Never Again to a Fascist Dictatorship!

Stop the Killings! Stop the Attacks!

Genuine Freedom and Democracy, not Cha-Cha and Tyranny!

Oppose Militarization of our Schools and Communities!

Stop Political Persecution! Activism is not a Crime!