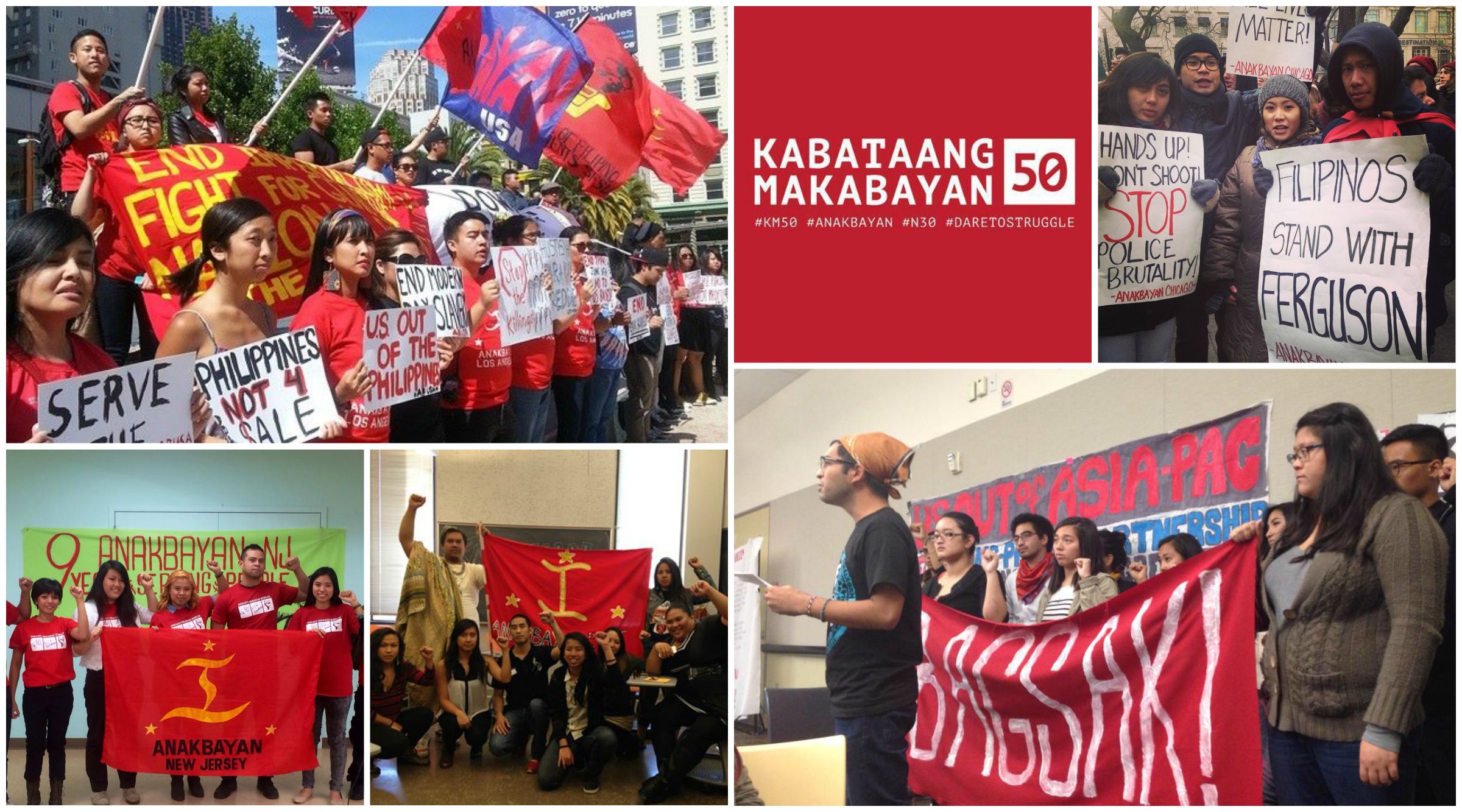 Anakbayan chapters across the US

Rise Up! Celebrating Kabataang Makabayan and 50 Years of Youth Organizing

BAYAN USA and Filipino youth across the United States join in the world-wide celebration of the 50th Anniversary of Kabataang Makabayan (KM).  November 30th also marks the 151st birthday of Andres Bonifacio, the leader of the Katipunan, the Philippine revolutionary army that toppled 300 years of Spanish colonialism in the late 1800s. The revolutionary spirit of the Katipunan and KM are instilled in the Filipino youth movement today which lives the national democratic struggle for genuine independence and freedom for the Philippines.

Decades after the Katipunan declared Philippine independence, a new generation of youth experienced a budding awareness that the same social ills under Spanish colonization were still rampant under the American colonial regime. The Philippines was still in shambles after the Philippine-American War in which 1 million Filipinos were killed by U.S. troops. Despite the Philippines’ nominal independence from American rule nearly 2 decades before KM’s founding, the Philippines was still being used by the United States as a source of cheap raw materials, the site of the largest American military bases outside the U.S., a launching pad for military aggression, and a dumping ground for American surplus.

Against the world backdrop of  Third World Liberation movements in the 60’s and 70’s that reflected inside the US with the nationalist organizations such as Black Panther Party, Young Lords, and Brown Berets, KM fought back against the dictatorship of Ferdinand Marcos, who was a puppet leader of the United States that maintained colonial socio-economic structures for the benefit of U.S. corporations and the Philippine landlord elite. KM joined workers’ and peasants’ organizations in struggles for better wages and working conditions and to demand land reform that would transform export-oriented monocrop plantations to farms producing crops that would feed the Filipino people. KM also led a major anti-war call throughout the Philippines and the Asia-Pacific by denouncing the U.S. military’s unfettered use of military bases in the region to launch their brutal offensive on Vietnam in the 1970s. The founding of KM in 1964 revived the revolutionary objectives of the Katipunan.

KM and other revolutionary organizations were forced underground by violent and repressive efforts by the Marcos dictatorship to quell the movement’s popularity among the people. Protesters faced blasts from water cannons and beatings from police batons. Many youth faced extrajudicial killings, enforced disappearances, and torture. To fight back against such state-sponsored violence, many KM members, channeling the spirit of the Katipunan, took up arms and joined the New People’s Army.

Fifty years later, the Aquino regime, like every other U.S. puppet regime that preceded it, proves to uphold the same practices of corruption and human rights abuses that KM fought against during the Marcos dictatorship. Aquino continuously fails the Filipino people in multiple fronts: lack of government aid and response to Typhoon Haiyan victims and still no proper infrastructures to prevent more disasters during Typhoon season in the Philippines; shielding his and his cronies’ interests in the Pork Barrel scandal including his own government funded programs under the Disbursement Acceleration Program (DAP); increasing US militarization and occupation by signing the Enhanced Defense and Cooperation Agreement (EDCA), and maintaining the Visiting Forces Agreement trampling on Philippines sovereignty.

BAYAN USA celebrates Kabataang Makabayan’s revolutionary legacy by arousing, mobilizing, and organizing Filipino compatriots abroad in participating and continuing the national democratic movement not only against the US-Aquino regime, but more importantly to build a better future for the Philippines. We invite all to participate in defending Philippine sovereignty against US imperialism and globalization, fighting for the rights of Filipino migrants around the globe and ending forced migration, and demanding genuine agrarian reform and national industrialization to create a Philippines for Filipinos!

A movement without youth has no future. Long live the Kabataang Makabayan! Long live the National Democratic Movement of the Philippines with Socialist Perspective!