Resistance is Not Terrorism: BAYAN USA Northeast Stands in Solidarity with the Palestinian Struggle for Genuine Liberation 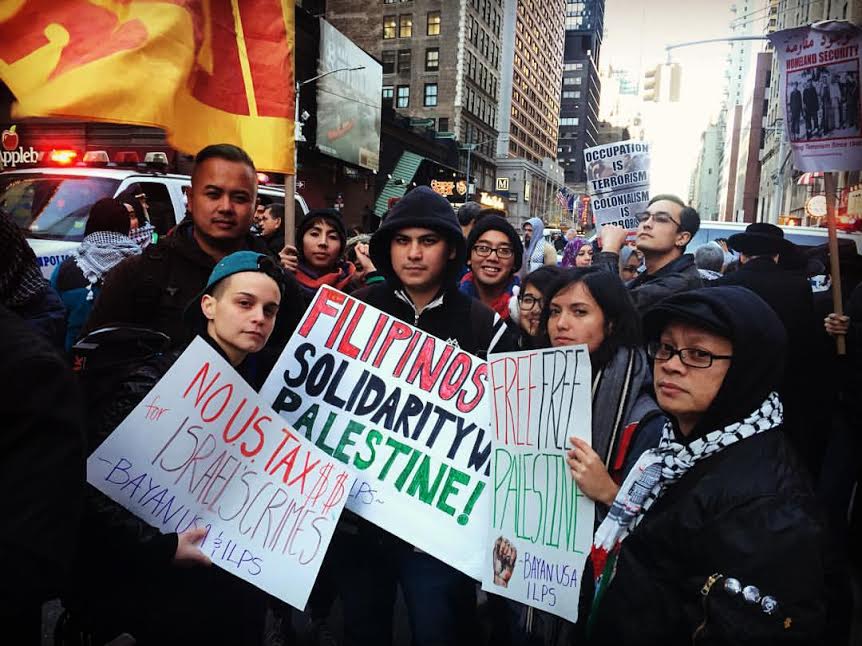 BAYAN USA North East mobilizing in the streets of New York in solidarity with the Palestinian people.

BAYAN USA Northeast vehemently condemns Zionist occupation and stands in solidarity with the movement for Palestinian liberation. For over 60 years the Palestinian people have resisted the colonization of their ancestral land just as the Filipino people have been continuing our own resistance since 1896. As oppressed peoples of the world, we must unite against foreign occupation and imperialism.
On October 18, 2015 BAYAN USA Northeast organizations GABRIELA New York, New York Committee for Human Rights in the Philippines and Anakbayan New Jersey, marched alongside 2,000 people in solidarity with the Palestinian people, the targets of settler aggression in the West Bank, East Jerusalem, and Gaza. Professor Hatem Bazian, Chairman of American Muslims for Palestine was the keynote speaker in the rally in opposition to the Zionist “Jewish Lives Matter” rally, also held in Times Square. Not only did the Zionist rally appropriate the Black Lives Matter language, but also callously wore Israel Defense Forces t-shirts as they held a moment of silence for murdered Israelis, but not for the disproportionately targeted Palestinians.
“We refuse to accept an unfolding of history that forces Palestinians off their land into small camps so that Zionists can develop the land for their sole interest,” said Jenab-i Pareja, Regional Coordinator of BAYAN USA Northeast,

“Palestinians have the right to return to their homes, the right to have decent lives uninterrupted by genocidal fascist imperialism. We refuse to accept another apartheid, the subordinate treatment of economic, social, political, and civil rights of Palestinians. We support Palestinians’ rights to fight for their liberation by any means necessary, the people have the right to rebel and take up arms against their struggle. From the Philippines to India to Palestine, armed struggle is the only solution.”

Palestine and the Philippines are two of the longest-lasting theatres of U.S.-backed wars of aggression. The Israeli military is the highest beneficiary of military spending outside of the U.S. The U.S. has been funneling $3 billion to Israel annually and $178 million to the Philippines to suppress resistance movements. In the past few weeks, over 30 Palestinians have been killed and more than 2,000 wounded. In particular, five protesters died and more than 100 were wounded in the Day of Rage in Gaza and the West Bank this past week. With the increasing state repression and human rights violations in both countries, there is no other choice but to struggle for liberation of our peoples.
BAYAN USA Northeast calls upon Filipinos throughout the diaspora to stand in solidarity with Palestine. The resistance of Filipinos is inherently tied to the resistance of Palestinians, and vice versa. Liberation in Palestine is a step towards liberation for the Philippines. Our movements are strengthened as our struggles for genuine peace intensify. Settler colonialism and imperialism will succumb to the rising power of the oppressed peoples of the world. Together, we struggle towards victory.

FROM THE RIVER TO THE SEA, PALESTINE WILL BE FREE!
NO TO U.S. TAX DOLLARS FOR ISRAEL’S CRIMES!
STOP U.S.-BACKED ZIONIST WARS AGAINST PALESTINE!
FREE, FREE PALESTINE!
DEATH TO US IMPERIALISM & ZIONISM!
LONG LIVE INTERNATIONAL SOLIDARITY!