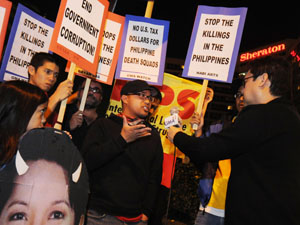 Los Angeles–BAYAN-USA and International League of Peoples’ Struggle (ILPS) declared Gloria Macapagal Arroyo’s no-show at her own Consulate-organized reception a victory for the growing movement to OUST Gloria. BAYAN-USA, ILPS, Anakbayan Los Angeles, Anakbayan San Diego, Habi Arts, the International Action Center, Al-Awda, Confederation of Iranians, Puerto Rican Alliance, FMLN and other community-based organizations shared their message of disgust with the U.S.-GMA regime with thousands of commuters going to and from Los Angeles International Airport. Protesters displayed pictures of human rights violation victims, projected a digital visual “OUST GMA” montage, a GMA effigy and placards as part of their protest. The protesters’ vowed to continue organizing and mobilizing to oust the much detested-Arroyo regime that is the worst Philippine administration since the U.S.-Marcos regime. 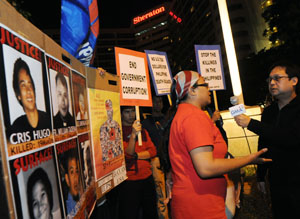 “This presidential pretender Arroyo, has the gall of junketing whenever and wherever she wants while the Filipino people are in dire straits,” says Kuusela Hilo, BAYAN-USA deputy secretary general. “However, just like  mass protests and swelling disapproval ratings blocked President George Bush from attending the Republican National Convention last September, planned demonstrations and opposition to Charter Change, not a stomach flu, pressured GMA and her Cabinet into re-thinking and canceling her eagerly awaited visit to Los Angeles.” 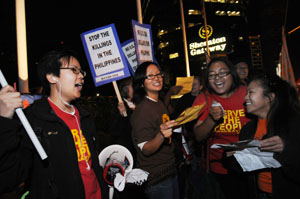 “We rolled out the red unwelcome carpet for GMA, red because of the ruthless blood-spilling for which her Bush-backed regime is responsible,” said Hilo.  Since 2001, 933 civilians have been killed and 199 disappeared.  Alex Montances, member of Anakbayan Los Angeles, stated “We dedicate this protest action to Rachelle Mae Palang and our sisters and brothers, young and old, who have lost their lives while valiantly fighting for the people.” 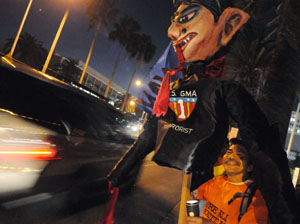 “As we celebrate Anakbayan’s 10 year anniversary of serving the people across the Philippines and in the U.S., we say it’s high time for change!”proclaimed Montances. “We the youth and students vow to continue the struggle to free our people and fight for justice,” ended Montances.

Today, the Philippines is experiencing the worst of times since World War II. There is an unbridled corruption instigated by Macapagal-Arroyo and her husband. 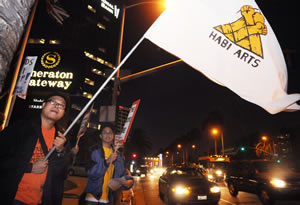 Complementing to this rampant corruption are the economic mismanagement and subservience to the policies imposed by the foreign big multinational corporations.  These further sink the Philippines into its situation right now where there is widespread poverty and unemployment. “For us here in the U.S., we need money for health care, education and good jobs, not Philippine death squads,” said Eric Tandoc, member of Habi Arts. “She is using our tax dollars to murder and abduct community organizers like Cris Hugo and Karen Empeno. But Gloria will never be able to stop the Filipino peoples’ struggle for genuine democracy,” stated Tandoc. “The American people stopped the Bush regime this year, and we’ll be able to stop the GMA regime in the Philippines before 2010,” asserted Tandoc. 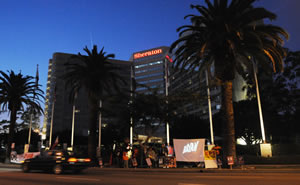 “BAYAN-USA and ILPS, and their allied organizations, are calling all concerned U.S. taxpayers to demand the US government–especially to the president-elect Barack Obama–to stop our tax dollars from funding the Arroyo government for it only supports the death squads in the Philippines.  It is also high time to bring the U.S. troops home from the Philippines,” concluded Hilo.