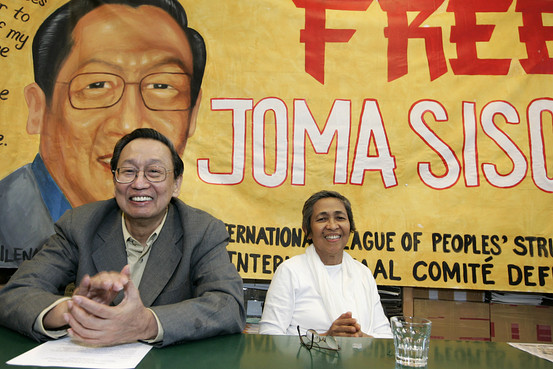 BAYAN-USA celebrated the landmark victory for all progressives and freedom-loving people on September 30, when the Court of First Instance of the European Communities (ECFI) annulled all previous decisions by the Council of the European Union (EU) that had maintained Professor Jose Maria Sison on an EU “terrorist list” and frozen his bank account since 2002. The Court ruled that “the procedures before the Raad van State and the Rechtbank [Hague District Court] clearly do not involve any ‘conviction’ of Mr Sison, nor do they amount to decisions to ‘instigat[e] … investigations or prosecut[e] for a terrorist act’.”

“The tactics used by reactionary governments to vilify Joma in the courts have failed because they stood on false pretenses,” said Berna Ellorin, Chair of BAYAN-USA. “No amount of smoke and mirrors could hide the truth: the only thing Joma is guilty of is serving the people and fighting for national freedom, democracy and social liberation.”

The EU’s terrorist blacklisting of Professor Sison in 2002 and the Dutch government’s subsequent arrest and detention of Sison in 2007 drew immediate criticism; well-respected organizations and individuals internationally denounced the actions as instigated by the Philippine and U.S. governments to silence dissent, particularly since the U.S. State Department had placed Professor Sison on its “terrorist list” earlier in 2002. Warrantless arrests and levying of false criminal charges against political activists are among the skyrocketing numbers of human rights violations committed since 2001 under the administration of Philippine President Gloria Macapagal Arroyo and her military. Earlier this year, Professor Sison was cleared of the Dutch government’s charges due to lack of any credible evidence.

“Joma’s vindication underscores the absurdity of the terrorist blacklisting in the first place,” stated Ellorin. “The U.S.-backed Arroyo regime can no longer hide behind the rhetoric of ‘preventing terrorism’ to justify what is actually a campaign of political repression.”

“If President Obama hopes for the U.S. to regain any credibility among international human rights bodies, it would serve him well to ensure that the U.S. State Department removes Joma from the U.S. terrorist list.”