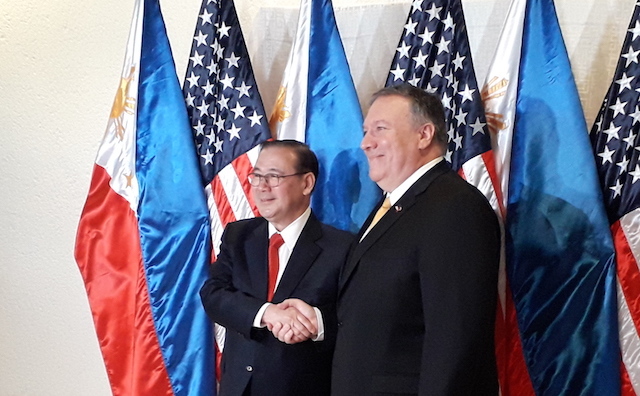 The people want real diplomacy, not a master and puppet show.

BAYAN-USA views U.S. Secretary of State Mike Pompeo’s visit to the Philippines as nothing more than a check up on Trump’s “prime piece of real estate” and to ensure that imperialism’s chief puppet President Rodrigo Duterte is continuing to do its bidding.

After President Trump’s meeting with Chairman Kim Jong-Un in Vietnam, Pompeo made a stopover in the Philippines to remind Duterte to continue serving as a loyal ally to U.S. imperialism. In return, the U.S. promises to intervene if the Philippines is attacked, referring to the land disputes with China. It is the height of hypocrisy for the U.S. to profess in words its desire for peace in Korea when it continues to act with impunity when it comes to global militarization, and in this case, would utilize the Philippines as a central battleground in a war between the U.S. and China. Pompeo and former U.S. Defense Secretaries have incessantly cited the US-PH Mutual Defense Treaty (MDT), Visiting Forces Agreement (VFA), and Enhanced Defense Cooperation Act (EDCA) as proof of the long history of so-called “friendship” with the Philippines, even though these agreements form the military bedrock for the master-servant relationship between the two countries. With the passage of the Asia Reassurance Initiative Act in December–which will dedicate $1.5 billion to advance Trump’s vision for national security and defense in the region–it is clear that U.S. imperialism is committed to investing as much as it can to cement its military stronghold in the Pacific. With this new Act, the U.S. will have additional fuel to continue to trample on the sovereignty of the Philippines as well as potentially siphon even more funding to the murderous Philippine military and police, despite widespread demands by people of the U.S. to cut off all support to the Duterte regime.

Pompeo’s state visit to the Philippines comes on the heels of his visits with other fascist world leaders: Bolsonaro in Brazil and Marquez in Colombia. Pompeo’s visit also follows a recent meeting of Duterte with the U.S.-Philippines Society, during which U.S. Ambassador to the Philippines reportedly expressed support for Duterte’s drug war. Pompeo’s promises to Duterte underscore U.S. imperialism’s commitment to backing fascist leaders who tow the interests of the ruling elite. It follows closely in the footsteps of Donald Trump’s visit to the Philippines in 2017, which left in its wake the intensification of U.S. military presence, announcement of U.S. Operation Pacific Eagle, the expansion of U.S. participation in Philippine counterinsurgency operations, and talks of a new bilateral trade agreement between the U.S. and the Philippines which would further increase Philippine economic dependence on the U.S. while draining the Philippines of its human and natural resources.

BAYAN-USA calls for the termination of the Mutual Defense Treaty, Visiting Forces Agreement, Enhanced Defense Cooperation Agreement, and the Asia Reassurance Initiative Act.  These agreements and acts violate the sovereignty of the Philippines and treat the Philippines and other sovereign nations as pawns in U.S. imperialism’s power plays. We join the call to end U.S. support for the Duterte regime and stop funding the murderous Philippine police and military! Take action by signing the petition for a Senate hearing and attend the National Summit for Human Rights and Democracy in the Philippines this April 6-8 in Washington D.C.