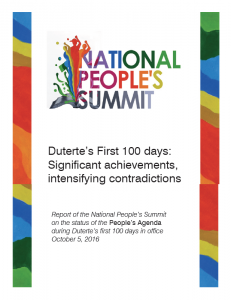 President Rodrigo R. Duterte was swept into office by a vote of more than 16 million, based on a promise of change and on a commitment to stamp out criminality and corruption. His first 100 days in office have yielded some positive developments but have also brought to the fore intensifying contradictions and growing challenges from forces opposed to change and forces pushing for more radical reforms.

On June 29, hundreds of people’s organizations, cause-oriented groups, institutions and individuals gathered at the University of the Philippines Diliman Film Center for the National People’s Summit in support of the People’s Agenda for Nationalist and Progressive Change (People’s Agenda). The Summit laid out a 15-point agenda for change as well as more specific recommendations contained in five areas of concern: Economy, Progressive Social Policy, Peace and Human Rights, National Sovereignty and Foreign Policy and Governance and Democracy.

The highlights of the agenda include genuine agrarian reform, national industrialization and economic sovereignty, economic relief for working people, an end to contractualization, independent foreign policy, resumption of the peace talks with the NDFP, campaign against corruption, a pro-people social policy and a progressive social policy in relation to health, education, housing and social protection. The People’s Agenda also includes short-term proposals for the first 100 days of the administration.

Last September 30, organizers of the Summit met again to report on the progress of the People’s Agenda. It is against these demands and proposals that we assessed the performance of the Duterte administration; identifying the positive outcomes as well as negative aspects, shortcomings and stark differences. The Duterte regime is full of contradictions and it is necessary for the people to identify the progressive aspects and support these while countering the reactionary and anti-people aspects. It is necessary for the people’s movement to maintain its independence even as it engages in principled unity and struggle with the Duterte administration.