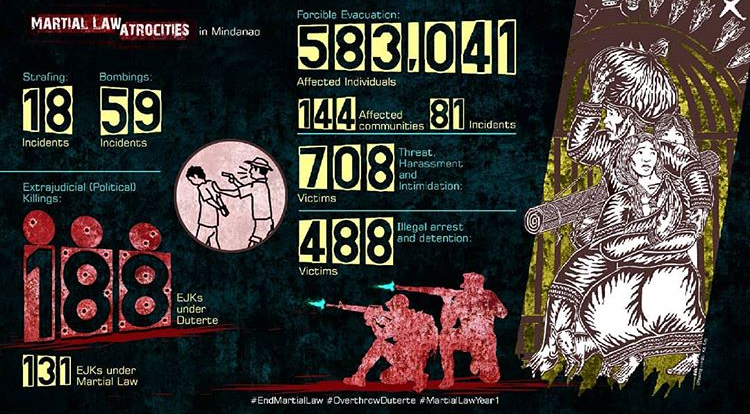 One Year of Martial Law in Mindanao: In the Face of Duterte’s violent attacks, the People’s Resistance Grows Stronger

May 23rd, 2018 marks one year that martial law in Mindanao was declared by Duterte under the guise of fighting terrorism, in line with his U.S. master’s “War on Terror.” Despite Duterte claiming victory in Marawi City against the Maute group  in October 2017, the regime has kept martial law in full effect, to continue violent political repression across the whole island. The impacts on the Filipino people have now been amplified with the start of the U.S.-Philippines Balikatan exercises this month, for which Duterte has welcomed more than 8,000 U.S. and Philippine troops to conduct war exercises and training side by side. BAYAN-USA calls for the immediate lifting of martial law in Mindanao and an end to U.S. imperialism in the Philippines!

Mindanao is one of the largest and most strategically situated and resource-rich islands of the 7,000 islands of the Philippines. It is home to the largest concentration of Bangsamoro people asserting their right to self-determination in the country, as well as a stronghold of the Provisional Revolutionary Government represented by the National Democratic Front (NDF), which is waging a revolution for national democracy. Well aware of this, Duterte has continued martial law in an attempt to impose his power against his strongest opposition. Far from succeeding in crushing the opposition, Duterte’s tyrannical rule has instead driven nearly half a million people from their homes in Marawi and indigenous communities throughout Mindanao, subjected children and families to the occupation of their schools and residences, imprisoned hundreds of activists on trumped up charges, and killed dozens of peasants, farmers and Lumad organizers.

Duterte’s maneuvers towards dictatorship are becoming more and more evident, with the recent forced removal of Chief Justice Maria Lourdes Sereno–a critic of Duterte’s Drug War–now consolidating his control over all three branches of government. This comes on the heels of the U.S.-Duterte regime’s declaration of a ludicrous “terror list” of 600 people including priests and other faith leaders, a U.N. special rapporteur, and former lawmakers. Duterte’s troll army, attacks on independent media outlets like Rappler, and media blackout continue to be used to control public opinion and propagate a false sense of his popularity. Time magazine recognized Duterte as one of the “strongmen” profiled in their front page story “Rise of the Strongman,” alongside Vladimir Putin and Viktor Oban. Duterte’s self interest in gaining more power and extending his presidency has been his number one objective since he came into power, at the expense of the Filipino people he is supposed to serve.

In the face of Duterte’s vicious attacks, the people’s resistance only grows stronger.

BAYAN-USA calls on all member organizations, allies, and advocates to take a stand against Duterte’s dirty wars against the people. Stand up to defend human rights and democracy, and demand an immediate lift of martial law in Mindanao! Take action in the streets! Hold community forums! Join the phone barrage by MALAYA: U.S. Movement Against Killings and Dictatorship, and for Democracy in the Philippines!

Stop the Killings in the Philippines!

Resist the Crackdown on Activists!