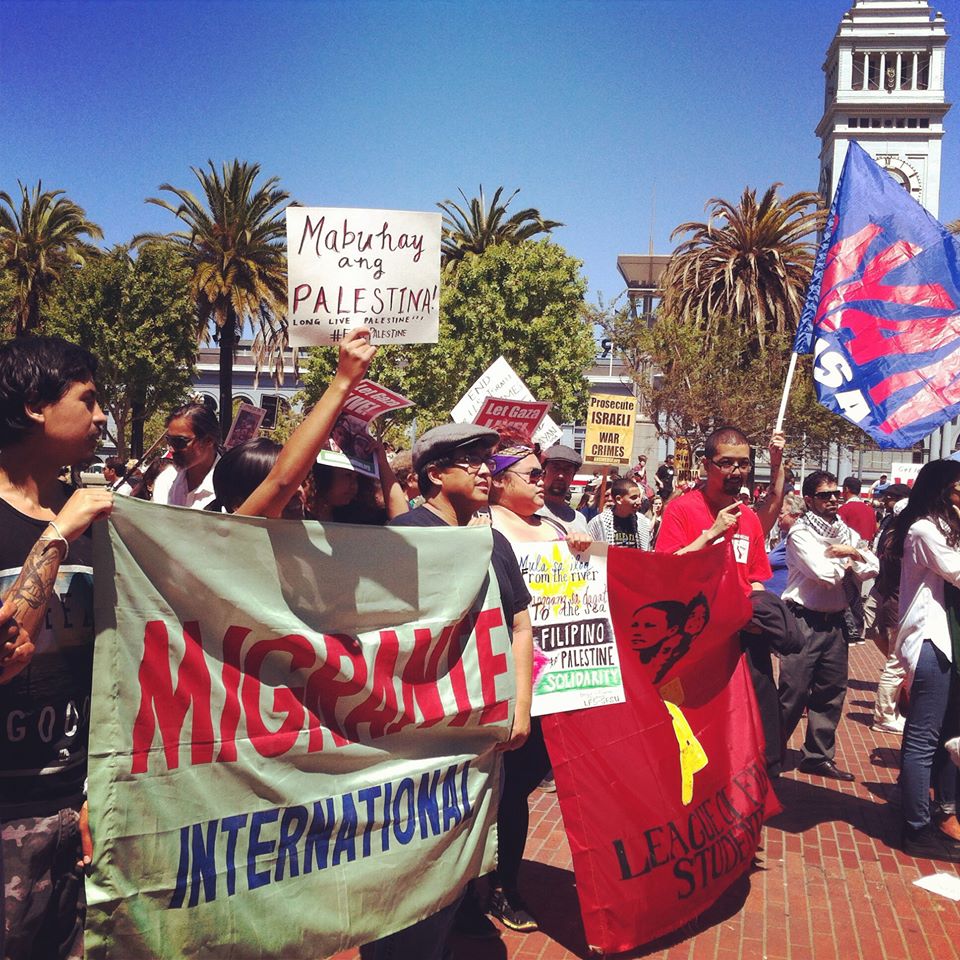 As millions of people the world over protest the brutal Israeli invasion of Gaza, Filipino Americans under the banner of BAYAN-USA pledged an additional way to support the Palestinian people’s right to self-determination: protest the US-Aquino regime’s political and financial support for the Zionist occupation of Palestine. The Filipino American alliance’s announcement comes in the wake of an agreement made between Philippine Defense Minister Voltaire Gazmin and Israeli Defense Minister Moshe Ya’alon for the Philippines to acquire excess defense articles from Israel, under the premise of bolstering the Southeast Asian nation’s defense capabilities.

“With the Zionist regime’s continuing colonial occupation of Palestine and its most recent slaughter of over 800 people, it is outrageous that the Philippines has made a pact to acquire ‘excess defense articles’ from Israel, including the purchase of at least P2.6 billion ($59.9 million) worth of air search radars,” said BAYAN-USA Secretary General Jessica Antonio. “Especially considering how poor the Philippines is, we believe it is criminal for Aquino to divert billions of pesos away from providing adequate food, housing and employment for the Filipino people and instead using it to financially support the murder of Palestinians.”

When Defense Secretaries Gazmin and Ya’alon met earlier this year, they also made plans to create a working group to discuss security situations in their respective countries and study possibilities for working together. BAYAN-USA drew links between the increasingly iron-fisted militarist approach of the BS Aquino regime and the Zionist occupation. “It is obvious that Aquino is importing not only military equipment but even the militarist strategy of the Israeli regime,” said Antonio.  “When you look at the escalating number of extra-judicial killings of activists, mass eviction of tens of thousands of people from poor communities to make room for wealthy settlements and corporate mega-projects, and incarceration and torture of hundreds of political prisoners on trumped up charges under Aquino’s watch, the tactics seem to come straight from the playbook of the Zionist occupation. It is really no surprise, since Aquino’s ‘Operation Bayanihan’ counter-insurgency program is modeled directly after the U.S. counter-insurgency guide of 2009.”

“Since he came into office in 2010, Aquino has spent over P40 billion ($917.53 million) to supposedly modernize the Philippine military. With the body count of Filipino civilians murdered by the Armed Forces of the Philippines topping 200, we have to question why Aquino is modernizing the military to wage war on its own people,” said Antonio.“Instead of choosing the dead-end path of bloody war and counterinsurgency, the Philippine government should address the root causes of suffering of the Filipino people. One immediate action it should take is to stop providing funding for the Israeli war machine and importing Zionist military perspective.  Another way it could make progress is by returning to peace negotiations with the National Democratic Front of the Philippines,” concluded Antonio.