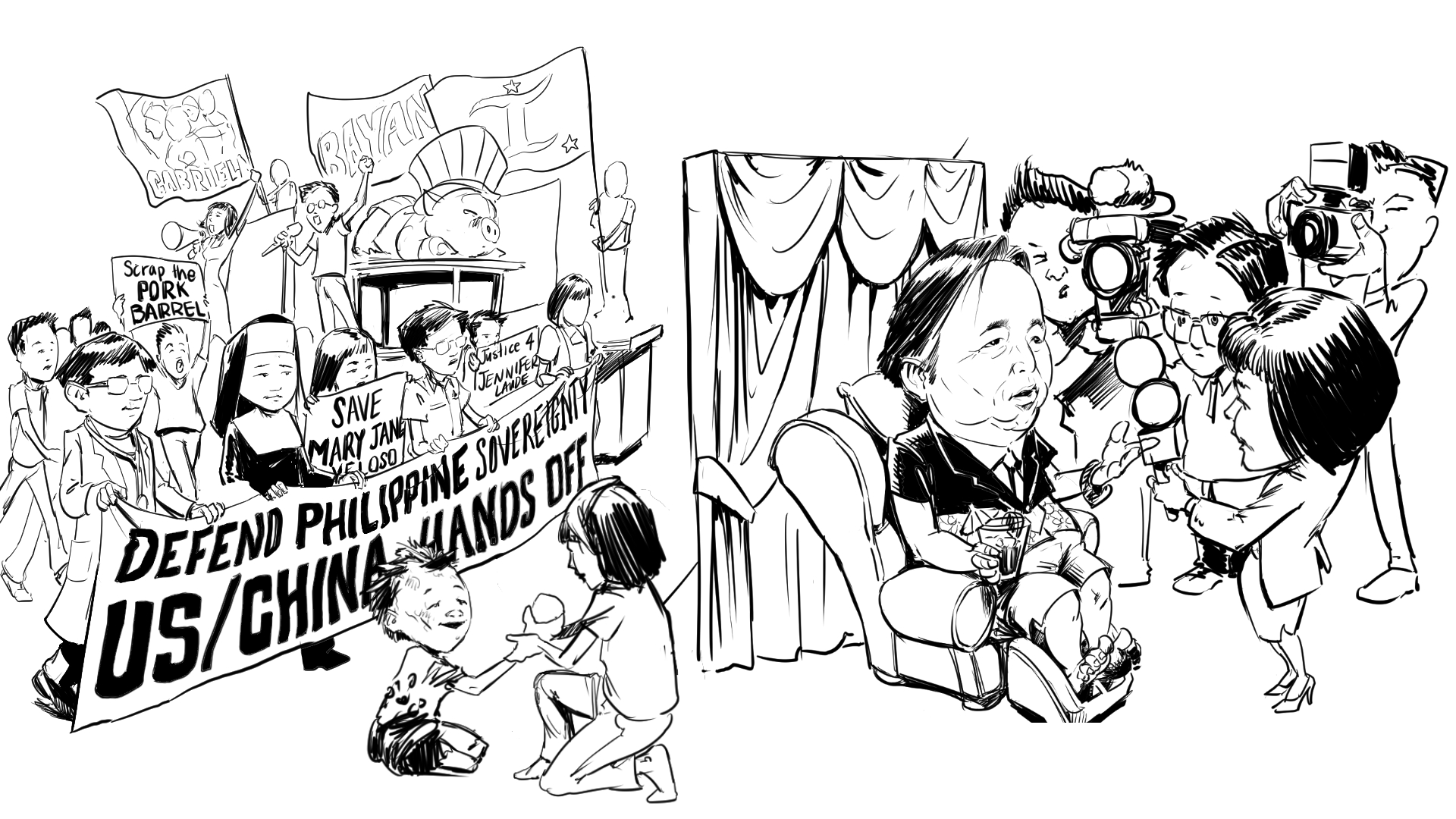 On the 24th anniversary of the historic people’s victory in the Philippines that was the Philippine Senate’s decision to shut down former US military bases Subic Naval and Clark Air Force, BAYAN USA calls on all Filipinos in the Philippines, the US and diaspora to support the movement for genuine sovereignty as the gains of this historic victory are being lost under the Aquino administration, its cronies and supporters.

US imperialism continues to dominate the economic, political and military direction of the Philippines.This dominance is maintained and advanced by the total subservience of the Aquino government and the ruling elite, at the expense of the Filipino people’s lives, livelihood, and national sovereignty.

It is clear that as Benigno Aquino III prepares to exit the presidency, his administration is racing to eliminate its most active critics of the US-backed counterinsurgency plan Oplan Bayanihan. Aquino’s loyalists both in the Philippines and the US are on a rampage to spread disinformation and false ideas of patriotism that resemble McCarthy-era scare tactics, detracting from the growing movement seeking justice and accountability. Rather than claim responsibility for state-sponsored killings of innocent civilians including children by the Armed Forces of the Philippines and the paramilitary groups under their command, Aquino and his cronies instead try to shift blame to the victims themselves. Ultimately, the Aquino government is betraying national interests in favor of super-profitability for itself and big foreign monopoly capital.

The July 30th Philippine Inquirer article by Rodel Rodis, vilifying BAYAN USA as being uncritical of Chinese imperialism, is part of this campaign of gross disinformation. It is no secret to that the likes of Rodel Rodis, a spokesperson  for US Pinoys for Good Governance, are staunch Aquino loyalists and cheerleaders in the US. Rodis wastes no time tagging BAYAN USA as a communist front in public– a tactic well-documented by international human rights watchdogs as also being used by the Armed Forces of the Philippines to justify the killings, abductions, illegal arrests and torture of those serving the most marginalized in the country and most critical of Philippine government policies.

But where Rodis’ article treads dangerously in its disinformation is in its false patriotism. It purports the idea that only the incursions of China are a threat to the Philippines, and therefore it is in the Philippines’ national interest to maintain and increase United States military presence in the country for defense and security.

Rodis’ line is completely devoid of the fact that the history of US intervention in the Philippines is much more than military intervention, but essentially insidious economic intervention. The US government has been actively engaged in Philippine economic policy-making through its colonial rule over the country in 1896-1946, and throughout neocolonial domination from 1946 to the present. This policy-making has led to the repressed development of local agriculture and Philippine national industries, resulting in massive joblessness and poverty. From the 1970s until the 1990s, the US used IMF stabilization programs and World Bank structural adjustment programs to impose far-reaching trade and investment liberalization, privatization and deregulation policies. From the 2000s until today, economic policy-making remains dictated by the US government, through its agencies such as USAID, and by the international financial institutions it dominates.

Despite false claims by Aquino and his loyalists of a stronger economy, the administration has seen the most poor and least employed number of Filipinos  in the country’s history. According to the Ibon Foundation, at least 66 million Filipinos struggle to survive on just Php125 (US $2.80) or less a day as of 2012. As of 2014, at least 12.2 million were unemployed and underemployed.

The main purpose of increasing US military presence in the Philippines and the Asia-Pacific region is neither for defense nor security. The geopolitical role of US military bases is to ensure political and economic hegemony over the region. In the Philippines, greater US military presence will push for greater US-dictated economic policy-making, increase land-grabbing by big foreign multinational corporations, increase extraction of our natural wealth for foreign benefit, increase the Philippine economy’s dependence on labor export and remittance of overseas Filipino workers rather than on domestic industrial development and production, and increase the state’s repression and human rights abuses of those struggling for genuine economic and political sovereignty for the country.

In 1991, decades of growing a Filipino people’s movement for national sovereignty culminated in the shutdown of the US military bases. Under Aquino, the Enhanced Defense Cooperation Agreement and the Visiting Forces Agreement are unapologetically welcoming US military installations back to the country. The Mamasapano Massacre in January also exposed the usage of US drones in so-called anti-terror operations in Mindanao as well as the US military command over Philippine security forces in these operations.

Lumad and poor rural communities in Mindanao are being eliminated, repressed, and displaced by the US-funded Philippine military and paramilitary who are doing the dirty work on behalf of large multinational corporations targeting the land for mining and corporate agribusiness.

This September 16, pro-sovereignty Filipinos and supporters are uniting under a broad formation known as P1NAS (Pilipinong Nagkakaisa para sa Soberanya), and are calling to defend Philippine sovereignty from ALL foreign incursions. The call for sovereignty must include the call to develop Philippine economic capacity and productivity through genuine agrarian reform, national industrialization, and an independent foreign policy with other nations based on mutual respect and benefit.

US/CHINA: HANDS OFF THE PHILIPPINES!

US OUT OF THE PHILIPPINES & ASIA!