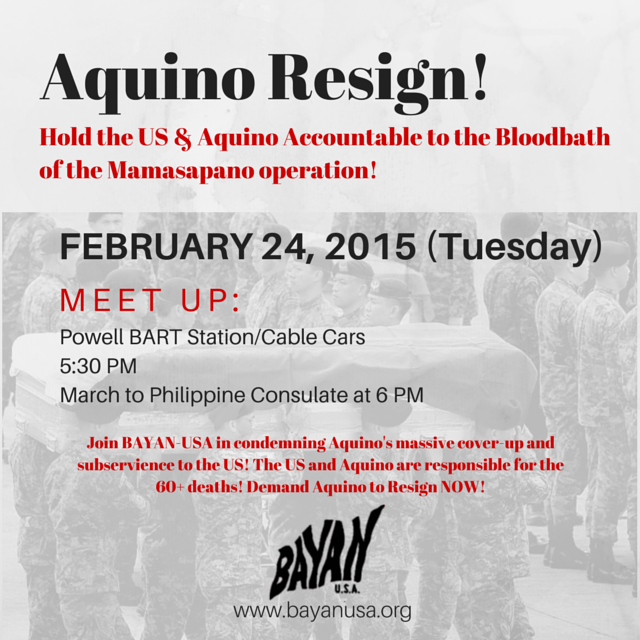 Under the banner of the Filipino alliance BAYAN-USA, Filipinos in major cities across the United States are conducting actions to demand that Philippine President B.S. Aquino III step down from office for his role in the deaths of over 70 Filipino civilians and Special Action Forces in a US-orchestrated military operation exactly one month earlier in the Philippine town of Mamasapano, as well his overall failure at his job as President of the Philippines. February 25 also marks the 29th anniversary of “People Power I” in the Philippines, the popular uprising that forcibly removed the Marcos dictatorship. A growing number of people worldwide are joining the call for Aquino to resign especially after the Mamasapano clash and the lack of truth and accountability of the US-backed Aquino regime.

“Since Aquino came into power in 2010, the Filipino people have suffered from increasing US economic domination and militarization of the country, and the Mamasapano incident is the straw that broke the camel’s back!” states Bernadette Ellorin, Chairperson of BAYAN-USA.

“Instead of safeguarding his people from America’s reckless ‘war on terror,’ Aquino has been telling half-truths and lies to attempt to cover up the US hand in this suicide mission.  This shows how little Aquino cares about his own people. The civilian death toll at Mamasapano disproves the claims that US military presence can safeguard the Filipino people from harm.”

“We’re concerned over Malacanang’s lack of transparency over this incident, despite members of the SAF-PNP pointing fingers at President Aquino’s direct knowledge and involvement in overseeing the operation. The breaking of the chain of command within Philippine security forces and involvement of US drones and troops implies serious breaches on Malacanang’ part on matters concerning provisions in the Philippine constitution, in Philippine national security, as well as the Aquino administration’s  integrity with regards to the GPH-MILF peace negotiations,” Ellorin continued.

“BAYAN-USA calls on the Filipino community and other concerned people in the US to join us in calling for Aquino to resign or be forcibly removed by the strength and numbers of people power. We’re also demanding an investigation into the US role in the Mamasapano incident and that the US stop imposing its failed war on terror tactics on our country. The list of Aquino’s failures and the reasons he should resign go on and on.  Together Filipinos across social sectors are uniting to not only call for his resignation, but to also build an alternative to this rampantly corrupt and repressive system!” ended Ellorin.

Join Filipinos across the US and internationally in actions listed below:

11:30am @ In front of Philippine Consulate

Hold the US & Aquino Accountable for the Bloodbath of Mamasapano!

Hold President Aquino accountable for the death of Filipinos in Mamasapano &

Denounce US intervention in the Philippines