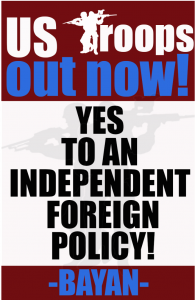 On the 25th anniversary of the historic Philippine Senate decision to shut down former US military bases Subic Naval and Clark Air Force, BAYAN USA calls on people who believe in a just and lasting peace to support President Duterte’s assertion of national sovereignty and the interests of the Filipino people in opposition to increasingly aggressive U.S. destabilization and intervention.

US imperialism continues to dominate the economic, political and military direction of the Philippines. This dominance has been maintained and advanced by the total subservience of the family dynasties which have ruled the Philippines since 1946, at the expense of the Filipino people’s lives, livelihood, and national sovereignty—until now.

President Duterte’s demands for U.S. troops to leave Mindanao and for the U.S. to make reparations for massacring over one million Filipinos during the Philippine-American War, his rejection of joint US-Philippine patrols of the West Philippine Sea, and his earnest resumption of peace negotiations with the National Democratic Front of the Philippines despite the U.S. blacklisting of NDFP members as “terrorists” are a bold departure from the puppet politics of the past 70 years.

We urge President Duterte to continue charting a course in the opposite direction of his predecessors, by abrogating the unequal military agreements with the U.S. which keep the Philippines beholden to the whims of U.S. imperialism: the Mutual Defense Treaty, Mutual Logistics Support Agreement, Visiting Forces Agreement, and the Enhanced Defense Cooperation Agreement. He should suspend the populating of Philippine bases with U.S. troops and the building of any new bases for American forces and war materiel. Hailing from Mindanao, President Duterte knows better than any previous Philippine president that U.S. military presence in the country facilitates land-grabbing and extraction of our natural wealth by big foreign multinational corporations, and the violent repression of Lumad and poor rural communities in Mindanao by the US-funded Philippine military and paramilitary acting on behalf of large multinational corporations targeting indigenous land for mining and corporate agribusiness.

We also urge President Duterte to resist the pressure to continue the neoliberal economic policies which have only stunted the development of local agriculture and national industries for decades, resulting in abject poverty and hunger for the majority of Filipino people. He must also resist the pressure to change the Philippine constitution so that the country may join the Trans Pacific Partnership (TPP), especially with the renewed full court press of President Obama to increase buy-in among Southeast Asian nations and to ram its approval through the U.S. Congress during his final months in office.

This September 16, BAYAN and other pro-sovereignty Filipinos will be rallying in Manila to defend Philippine sovereignty from ALL foreign incursions. The call for sovereignty must include the call to develop Philippine economic capacity and productivity through genuine agrarian reform, national industrialization, and an independent foreign policy with other nations based on mutual respect and benefit.

DEFEND PH SOVEREIGNTY!
US and CHINA: HANDS OFF THE PHILIPPINES!
US OUT OF THE PHILIPPINES & ASIA!
NATIONAL INDUSTRIALIZATION NOW!
GENUINE AGRARIAN REFORM NOW!
ADVANCE THE NDFP-GRP PEACE TALKS!