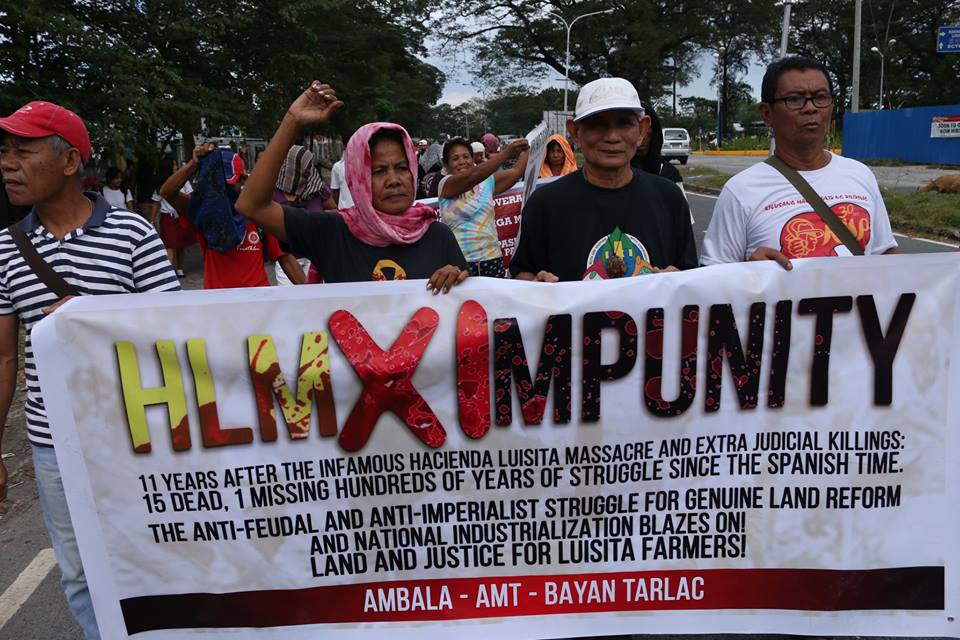 On November 16, 2004, seven farm workers were killed while hundreds of others were injured and unlawfully arrested after police and military personnel opened fire on thousands of striking sugar workers near the gate of the Central Azucarera de Tarlac (CAT) mill in Hacienda Luisita – the controversial 6,453-hectare estate controlled for nearly five decades by one of the Philippines’ most powerful landlord families, the Cojuangco-Aquino clan. Philippine President, Benigno Simeon Cojuangco Aquino III is a fifth generation scion of the Cojuangcos, and guilty of these murders among more than 290 extra-judicial killings during his term. The fight for genuine agrarian reform continues as part of the National Democratic struggle for the Philippines.

This week thousands of people around the globe are staging Anti-APEC (Asia Pacific Economic Cooperation) protests joining the protests in the Philippines spearheaded by the group People’s Campaign Against APEC and Imperialist Globalization. 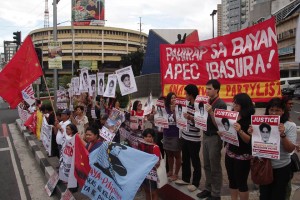 The political repression faced eleven years ago is the same political repression activists and community organizers face today. Peasants, who make up more than 75% of the population in the Philippines, still demand genuine agrarian reform- a redistribution of the land. Many died defending their rights to the land at Hacienda Luisita and today they continue to fight against the bureaucracy of land distribution after the Supreme Court’s decision to award the farmers a certain percentage of the Cojuangco land.   According to Kilusang Magbubukid ng Pilipinas (meaning ‘Peasant Movement in the Philippines’), Aquino has continued a legacy of human rights violations against peasants including 189 cases of trumped up charges, 28 illegal arrests and detentions, over 30 cases of torture, and 7 extrajudicial killings.  Widespread landgrabbing and human rights violations have only intensified under the Aquino regime.

Hacienda Luisita farmers have also expressed solidarity with the plight of the Lumads (indigenous people of the Mindanao region) being brutally attacked and murdered by the Philippine military and paramilitary because they too are fighting and protecting their ancestral land from the encroachment of foreign corporations. Over 500,000 hectares of land in Mindanao is covered by large-scale plantations, a majority of which are run by multinational corporations. The Aquino regime has continued to use the counter-insurgency plan, Oplan Bayanhihan, to carry out its war of terror on peasants and Lumads rising up to resist the militarization of their communities. The Armed Forces of the Philippines (AFP) has deployed 56% of its troops to the Mindanao region in an effort to protect the economic interests of the wealthy landlords and corporations.  Over 40,000 Lumads have been displaced from their ancestral land, and thousands are carrying out the Manilakbayan ng Mindanao in protest of these incessant attacks.

BAYAN USA joined the farmworkers of Hacienda Luisita, Lumads, and hundreds of international activists storming the streets of Manila in protest of the APEC Summit to denounce imperialist globalization and Aquino’s subservience to foreign investors. BAYAN USA will continue to hold President Aquino accountable for sham reforms and brutal violence inflicted on the peasants and indigenous people.  We will continue to support the peasant movement for genuine land reform and justice for all victims of state repression.  We call on the international community to join together in the international struggle against imperialism and the fight for national and social liberation by participating in the International League of People’s Struggles (ILPS), which just held its 5th International Assembly.

Justice for the Victims of the Hacienda Luisita Massacre!

For more information on:

Save Our Schools Campaign:  www.saveourschoolsnetwork.wordpress.com