On Heels of Massive Action for Victims of Kidapawan Massacre, Bay Area Residents will Join 24 Hour Fast Tonight at 6pm 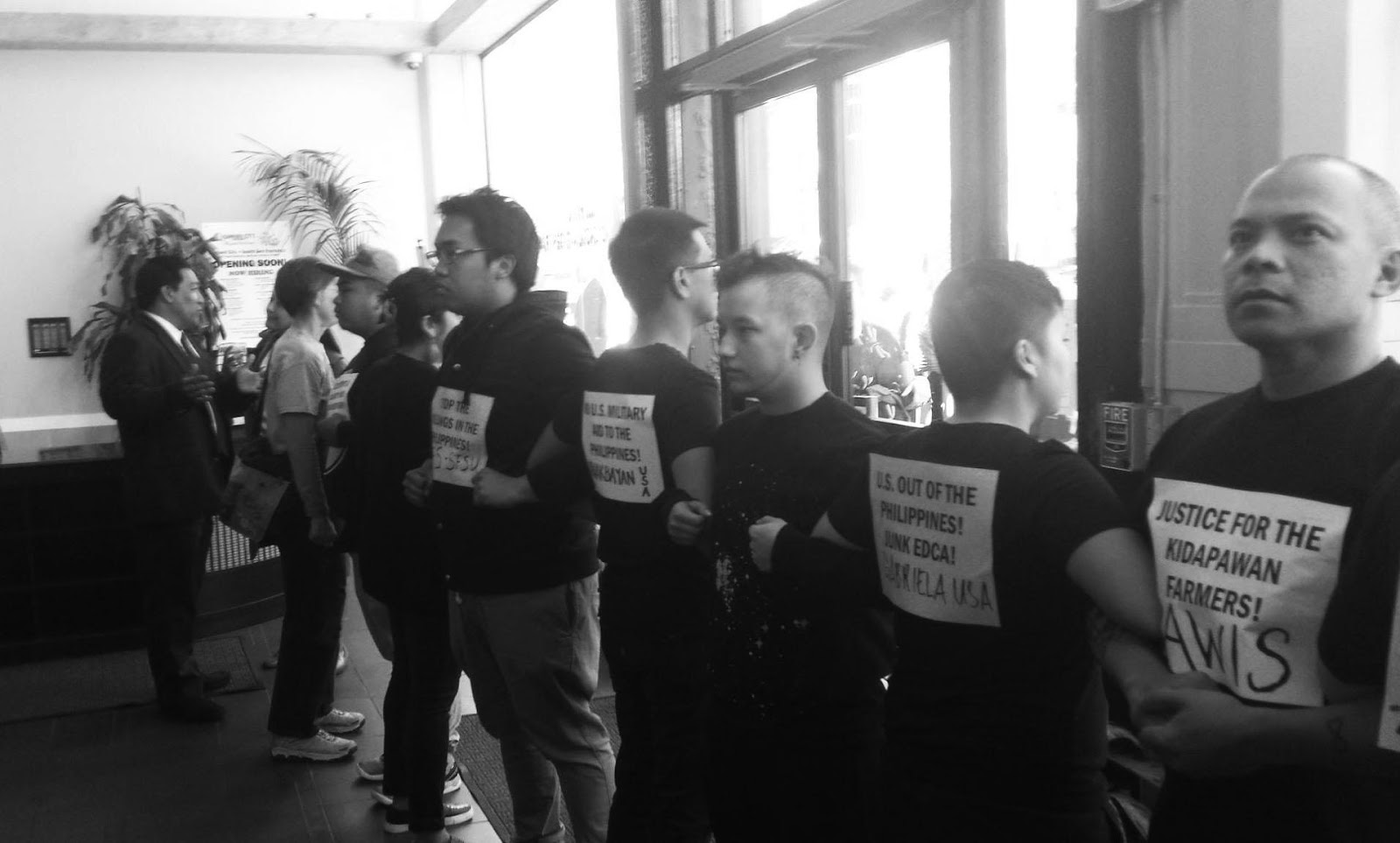 San Francisco, CA – Roughly 200 Filipino advocates, community organizations and faith groups protested outside the Philippine Consulate on April 5, demanding justice and accountability for the Philippine government’s violent dispersal of thousands of farmers that occurred in Kidapawan, Philippines on April 1 that led to the deaths of 2 farmers, 116 injured, and 78 detained. A  delegation of community members went inside to speak with Consul General Henry Bensurto, while over a dozen representatives of faith-based, women, youth, LGBT, and migrant worker organizations participated in civil disobedience in the lobby of the consulate.

“This action is a culmination after several sit down meetings with various representatives of the Philippine Consulate about the human rights situation in the Philippines, with no clear action from the officials,” says Terry Valen of the National Alliance for Philippine Concerns (NAFCON). “The Consulate officials mirror the Philippine government’s response by not doing anything to help the starving Filipino people asking for food aid and especially not addressing the genuine needs of the people,” continued Valen.

Reverend Jeannelle Ablola, Co-Chair of the United Methodist Church Cal-Nevada Philippine Solidarity Task Force, joined the delegation that spoke with Consul General Henry Bensurto. “This culture of impunity must end. Every day the people go without justice and without their basic rights is a sin committed by those in government who have been entrusted to serve the people,” said Reverend Ablola.  “Inaction or long delays in the process of giving relief is unacceptable and prolongs the suffering of the poor and marginalized with whom Jesus chose to so clearly and compassionately stand for and with.”

“We are enraged by the dire situation faced by the farmers, and the blatant disregard by the Aquino administration and other members of the Liberal Party,” said Princess Bustos of Migrante Partylist-USA. “Governor Lala Mendoza shows that the Liberal Party truly has no concern for the lives of their constituents and other Filipinos when more than 5,000 farmers and their families are literally starving for months with no support from the government.” 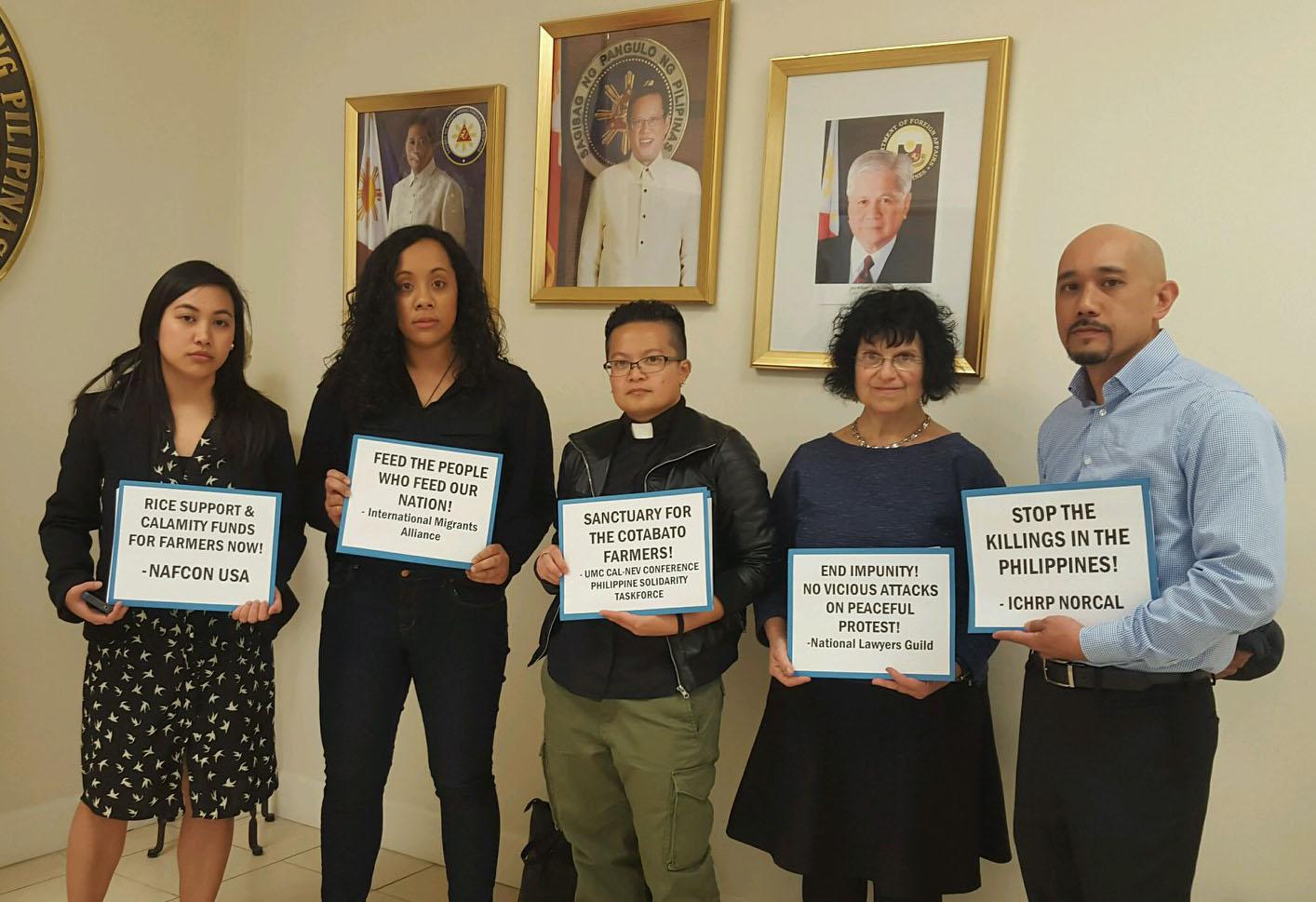 Upon learning of the Kidapawan massacre, Bay Area Filipinos and non-Filipinos alike took swift action to activate the International Coalition for Human Rights in the Philippines – Northern California (ICHRP-NorCal) and organize the rally, civil disobedience, and delegation that met with consulate officials.  “Access to food is the most fundamental human right. Farmers and their families suffered with hunger for extended months without government action. Their demands are just, and their protest to call attention to their situation is legitimate. We want them to know that they are not alone in their fight, and that members of the international community support them,” said Marienne Cuison, a volunteer with ICHRP-Norcal.

For more on the action and the Kidapawan massacre: follow #RiceNotBullets or join the ICHRP-NorCal Facebook page.  More photos, video, or interviews available upon request.

ICHRP-Norcal is launching a 24 hour fast in solidarity with the farmers in Cotabato and the victims of the Kidapawan Massacre on April 7 at 6pm. This effort is in coordination with a Global Day of Action for Food and Justice on April 8th, 2016. For more information please visit: Solidarity Fast with Victims of Kidapawan Massacre.