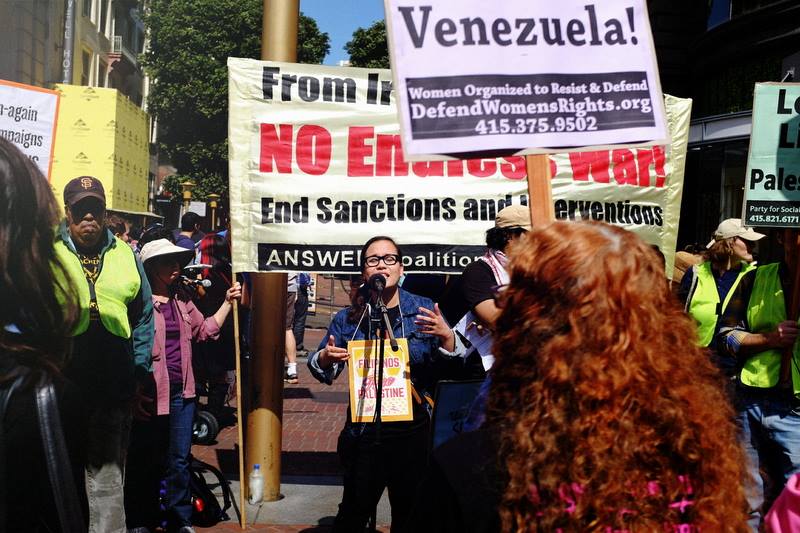 The Philippine National Police Board of Inquiry (“BOI”) Report and the draft Philippine Senate Report on Operation Exodus confirmed what BAYAN-USA suspected all along: the U.S. was unquestionably involved in the tragic counter-terrorism operation that left at least 66 Filipinos dead, including civilians.  Among the most damning pieces of evidence cited by the reports were the presence of six Americans at the Tactical Command Post, and an American ordering a Philippine General to fire artillery during the operation. The reports directly contradict a paltry statement made by the U.S. Embassy that the U.S. was only involved in assisting with “retrieval” of wounded Filipino police officers and dead bodies.

The official reports were issued on the eve of the 12th anniversary of the U.S. invasion of Iraq and in the midst of U.S. imperialism’s posturing against Venezuela, including declaring the country an “extraordinary threat to national security” and placing sanctions on seven Venezuelan officials.  BAYAN-USA members are participating in protest actions nationwide on March 21, to mark the anniversary of the U.S. war on Iraq and to link the struggle of the Filipino people to others who are also fighting U.S. intervention and aggression.

“When it comes to U.S. foreign relations, the truth is scarce but there’s plenty of intervention to go around,” stated BAYAN-USA Chair Bernadette Ellorin.  “The U.S. Embassy was lying when it said there was no American involvement in Mamasapano. The U.S. lied about Saddam Hussein’s weapons of mass destruction to justify the invasion of Iraq.  And it lies when it portrays Venezuela’s pro-U.S. coup-plotters as victims of anti-democratic government suppression.”

While the forms may vary from covert operations conducted by proxy armies to remote-controlled drone attacks to massive ground invasions and airstrikes, a common thread ties together all instances of U.S. intervention: furthering the neoliberal economic offensive of the global 1% for total control of resources, unfettered access to geopolitically strategic lands and waterways, and buttressing ruling regimes like President B.S. Aquino who serve as loyal allies to the imperialist agenda.

Back in 2003, then-President Bush followed the “shock and awe” doctrine, using high-tech military force to destroy all the basic infrastructure of Iraq, ultimately leading to the death of over one million Iraqi people.  Today, President Obama claims it is building a leaner and more nimble military force to help propel America’s “Pacific Century” by shifting 60% of its military to the Asia Pacific, including the Philippines.  In the words of Deputy Secretary of State Antony Blinken last month while in Tokyo, “There is a reason that President Obama made the strategic decision to rebalance America’s engagement and resources toward the region, and it’s very simple: Nowhere in the world are economic and strategic opportunities clearer or more compelling than in the Asia-Pacific.”

The result of these escapades are also clear and compelling: loss of national sovereignty, as in the Mamasapano operation; civilian casualties, as in the murder of Jennifer Laude by U.S. Marine PFC Joseph Pemberton; devastation of the environment, as in the ramming of Tubbataha Reef by the USS Guardian; instability and endless civil war, as in the Philippine military’s all-out assault on the Moro people of Mindanao following Operation Exodus, which has turned communities near Mamasapano into war zones and over 123,000 people into internal refugees.

“The U.S.-U.K. war of aggression against Iraq was illegal.  U.S. involvement in the implementation of Operation Exodus violated the Philippine constitution. In its race for complete hegemony, U.S. imperialism cares nothing about international laws or diplomacy—or the lives of innocent people,” said Ellorin.

We know that U.S. imperialism has every intention to skirt around the truth and will never take responsibility unless the people demand it. But the common thread which binds together the oppressed people of the Philippines and Iraq, nations like Venezuela and Cuba who are asserting their independence, and all oppressed people worldwide is the will to resist imperialist incursions and the courage to fight for genuine freedom, democracy and sovereignty,” said Ellorin.