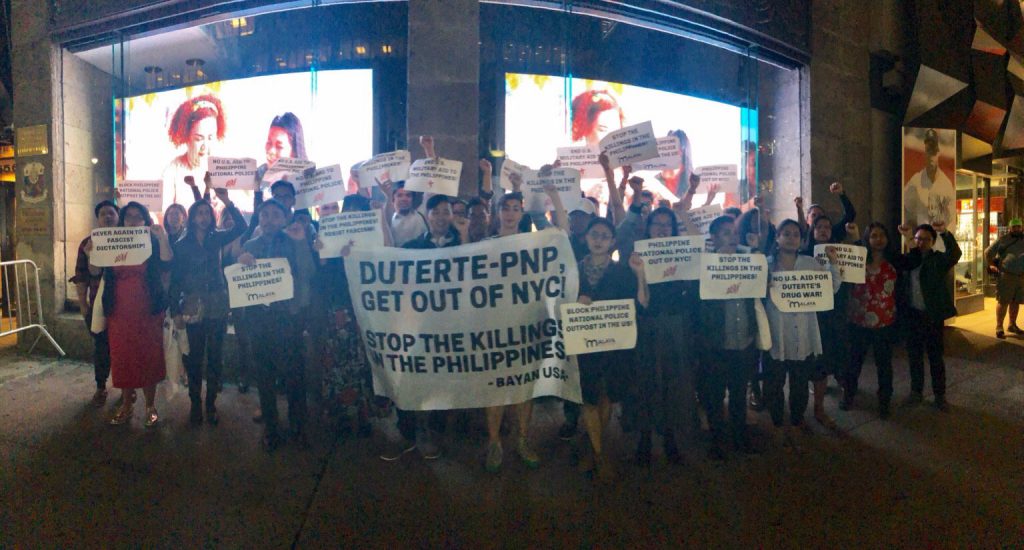 New York – More than 30 activists confronted the Philippine National Police (PNP) Chief Supt. (PCSUPT) Rhodel Sermonia, director of the Global Police Community Relations (GPCR) program, at its East Coast launch and Town Hall at the Philippine Consulate General of New York on the evening of Friday, October 5, 2018.  The Malaya Movement, along with allied organizations Bagong Alyansang Makabayan (BAYAN) USA North East, Migrante USA, Anakbayan New York and New Jersey, GABRIELA New York and New Jersey, and the New York Committee for Human Rights in the Philippines (NYCHRP) collectively expressed opposition to the establishment of the Global PCR program.  Together, groups condemned the international exchange and training program between the PNP and the New York Police Department (NYPD) and the whitewashing campaign of the Duterte administration in denying the tens of thousands killed in the president’s “drug war” at the hands of the PNP.

The emergency action was comprised of picketing and protests outside the consulate; disruption of PCSUPT Sermonia’s presentation filled with disinformation and empty attempts to mend the PNP’s international image and public relations; and grilling the chief on facts about Duterte’s bloody anti-drug and anti-loitering campaigns, which disproportionally target the urban poor, one-sidedly vilify suspected drug users and those who participate in the drug trade as inherently deserving of death, and deny Filipino citizens due process.

Inside the town hall, members of BAYAN-USA and allies disrupted PCSUPT Sermonia in a series of protests on PNP’s human rights record and its role in the repression of activists. “We are here to expose this most recent maneuver of the Duterte regime and its private armed goons and hired killers, the Philippine National Police. This PNP Global Police Community Relations is nothing but a propaganda machine aimed to deodorize the stinking human rights record and bloody image of the Duterte regime and the PNP. They aim to hide the thousands of dead bodies that they murdered in cold blood with a cheap publicity gimmick,” said Bernadette Ellorin, spokesperson of Bagong Alyansang Makabayan (BAYAN-USA). Duterte supporters aggressively and violently attacked members of BAYAN-USA as they tried to silence anti-Duterte statements and facts about Duterte’s anti-drug and anti-loitering campaigns by yelling, shoving, punching, and kicking the protesters. Two activists were injured as a result and had to seek medical care.

Throughout his presentation, PCSUPT Sermonia insisted that the program’s purpose was to “win hearts and minds” of Filipino communities abroad by urging Filipinos to utilize the Global PCR’s web portals and social media pages to report crimes happening back home, promote tourism and business investment in the Philippines as “virtual ambassadors,” and encourage people to provide financial contributions and assistance, whether individual or organizational, directly to the PNP.  “Mr. Sermonia said that the PNP is here to address the problems of our kababayans, especially the emotional problems, if their loved ones are left in the Philippines. If the PNP really want to ease our worries, then they should stop the war on the poor and arrest the main drug lord, Rodrigo Duterte,” according to a statement released by Malaya Movement in response.

Even while Duterte recently admitted that he considers the plethora of extra-judicial killings in the country during his presidency as his “only sin,” the PNP is trying to wash its blood-stained hands clean and distance itself from its role in the president’s “drug war.”  PCSUPT Sermonia painted the PNP as peacekeepers and compassionate protectors of the poor under the Duterte administration, and in the same breath, refused to say how many Filipinos the PNP has executed in drug operations, even as noted in PNP statistics. Amidst his insistence that the Philippines is safer than it has ever been, he denied reports that cited PNP’s cash reward system based on number of kills and their coordination with vigilante groups.  He asserted that he “could count with his fingers” the number of innocent civilian deaths in the anti-drug campaign, brushing them off as anomalies.

From the beginning of the Town Hall event until all consulate staff and PCSUPT Sermonia himself exited the building, the groups picketed and protested outside, calling for the PNP to leave New York City and demanded that the United States government stop sending U.S. taxpayer money to the Philippines, slamming Duterte and the PNP as terrorists, and calling on them to stop the killings in the Philippines.  Bernadette Patino of the Malaya Movement, also a member of activist youth organization, Anakbayan New York, provided a summary report what went on during the Town Hall while Bernadette Ellorin of BAYAN-USA gave the closing statement.

The Malaya Movement in the North East reiterates our position that the Philippine National Police and its Global Police Community Relations is not welcome in New York City, the United States, or anywhere else in the world.  The Malaya Movement condemns the continuous slaughter of Filipinos by the PNP under Duterte’s orders; the normalization and rationalization of unrestricted state violence; PNP’s denial that it has committed gross human rights violations and contributed to the tens of thousands have been killed under the banner of the president’s “war on drugs”; and the silencing of the international movement against Duterte’s fascism and looming dictatorship.  It stands in solidarity with all survivors and communities affected by the anti-drug and anti-loitering campaigns led by the PNP, advocating for an end to state-sanctioned violence and true democracy and freedom in the Philippines.