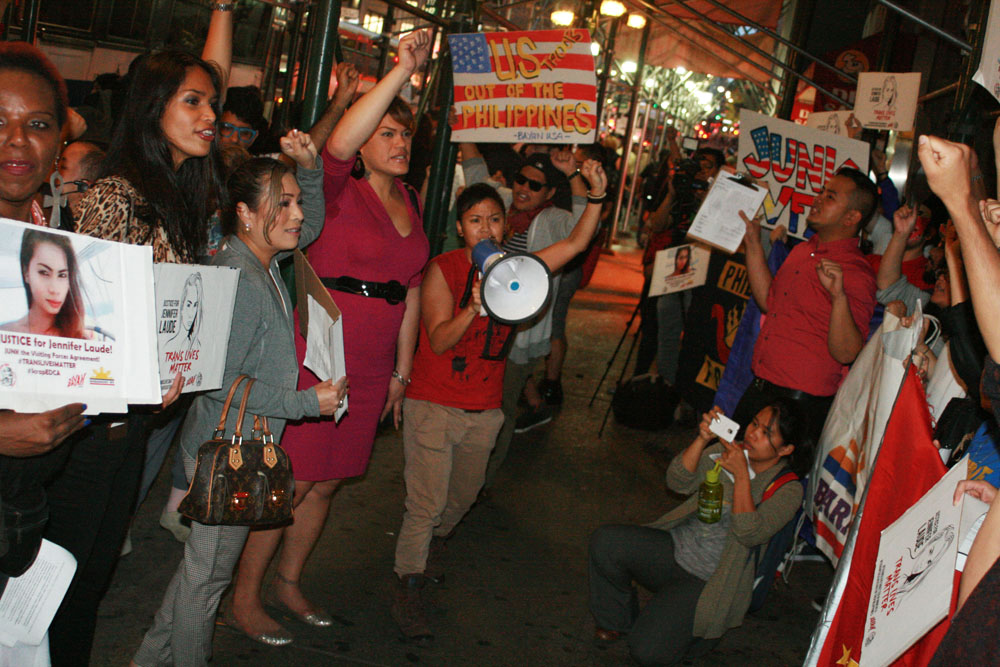 New York – On Wednesday, October 15, 2014, the BAYAN-USA Queer Caucus led a rally of over 100 activists outside of the Philippine Consulate to express outrage over the violent murder of Filipina transgender woman Jennifer Laude in Olongapo City, Philippines. A United States Marine, identified as Private First Class Joseph Scott Pemberton, is a suspect in the murder case. BAYAN-USA Queer Caucus called for unity to demand accountability from the United States government for the transphobic hate crime, including the transfer of Pemberton’s custody from the U.S. to the Philippines. In addition, they called for the abrogation of the Visiting Forces Agreement and all unequal military treaties between the U.S. and the Philippines asserting that the treaties perpetuate systemic violence against the Filipino people, especially women, children, and LGBT individuals.

The BAYAN-USA Queer Caucus was joined by GABRIELA-USA, Barangay New York, Anakbayan USA, the U.S. Out of Asia-Pacific Coalition, TransJustice of the Audre Lorde Project, the Anti-Violence Project, Iraq Veterans Against the War, religious leaders, and prominent individuals from the Filipino transgender community, including model and transgender activist Geena Rocero, and Miss LGBT Philippines-USA Chelle Lhuillier.

“Today’s action rally was a huge success. Leaders of various LGBTQ organizations, friends and allies showed that with unity, solidarity, and positive action we can become a voice in demanding justice for a victim of transphobia and senseless killing,” exclaimed Lhuillier. “The fight for justice has just began and we will continue until we attain Justice for Jennifer Laude. I am so glad I became a part of a meaningful protest.”

The activists, coming from different social justice movements, saw this as a moment to recognize how issues of transphobia and militarization are intertwined. In the activists’ speeches, it was repeatedly acknowledged that transphobic hate crimes and killings are at an all time high in the United States and around the world and that U.S. militarization of poor communities, communities of color, and the third world is increasing.

“Trans women like Jennifer are at a higher risk for violence because we live in a society that devalues their lives,” stated Irma Bajar of GABRIELA-USA. “The murder of Jennifer is a hate crime committed by U.S. military personnel, and we call on B.S. Aquino to compel the U.S. to surrender Pemberton to Philippine authorities and terminate the VFA and EDCA now!”

The controversial Visiting Forces Agreement was enacted in 1999. It virtually reinstated the U.S. military bases that had been banned by the Philippine Congress in 1991 by allowing U.S. troops to use the former bases on a “rotational basis.” There are approximately 1,400 U.S. troops currently in the Philippines conducting military exercises. A provision of the VFA allows erring U.S. servicemen to evade prosecution in Philippine jurisdiction by being held solely under U.S. custody. The Philippines may only “request” custody of an erring U.S. serviceman under “extraordinary circumstances.” The new Enhanced Defense Cooperation Agreement seeks to broaden U.S. military privileges in the Philippines.

Jennifer’s hateful murder is reminiscent of the 2006 Subic Rape Case, in which Lance Corporal Daniel Smith was never transferred to Philippine custody despite being charged, convicted, and sentenced to life imprisonment for the rape of Filipino woman “Nicole.” Smith was eventually acquitted in the Court of Appeals in 2009. Especially because Jennifer’s case is clearly a hate crime against a transgender individual, the activists are reluctant to undergo another unavailing prosecution.

“We are pressuring the administration of President Aquino to exercise Philippine sovereignty and take a stand to protect the Filipino people by urging the U.S. to transfer Pemberton to Philippine custody,” stated Jenab-i Pareja of BAYAN-USA Queer Caucus. “We call on Congress to repeal the Visiting Forces Agreement to get rid of this unequal relationship. At the same time, we support the movement to pressure of the Philippine Congress to pass anti-discrimination legislation to protect the LGBT community.”

Gabriela Women’s Partylist in the Philippines has recently submitted a resolution in the House of Representatives to assert jurisdiction over Pemberton and to terminate the VFA in order to bring justice to Jennifer. Geena Rocero has been part of the campaign to push the adoption of House Bill 110, an Anti-Discrimination Bill, versions of which have been pending in the Philippine Congress for over a decade.

It was a common sentiment that Jennifer’s murder is a learning moment for the Filipino community. “At the root of it all is the issue of self-determination,” stated Jackelyn Mariano of BAYAN-USA. “The Filipino community and its supporters should take this as an opportunity to remold from ignorance of transgender issues and allow Jennifer, even in her death, to exist with dignity and respect as who she was. The fact that the VFA was a catalyst to the hate crime committed against Jennifer should urge all Filipino people around the world to fight for national sovereignty and for collective dignity against U.S. imperialism.”

The activists paid respect to Jennifer’s family and vowed to continue visibilizing the issue until there is justice reached for her case. They closed the rally enthusiastically chanting words of Assata Shakur stating, “It is our duty to fight, it is our duty to win. We must love each other and respect each other. We have nothing to lose but our chains.”