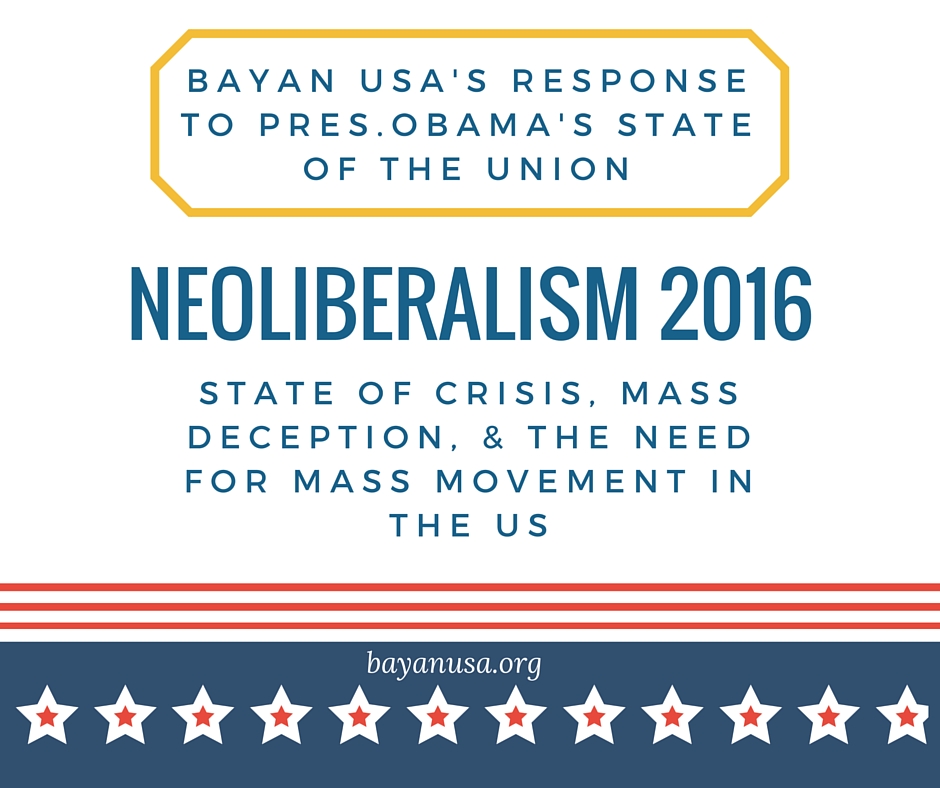 Obama’s most recent State of the Union Address once again paints a false picture of the US economic and political situation, employing mass deception to cover up a worsening global and national crisis that is burdening, and repressing, more and more Americans everyday.

By pushing and clinging onto the neoliberal economic paradigm both in foreign and domestic policy, the US-led ruling financial elite extract super-profits by worsening the crisis they created. The US remains the world’s largest and most powerful imperialist superpower and military aggressor, and despite Obama’s claim of a strong US economy, the American people suffer from chronic crisis wrought from neoliberalism.

Neoliberalism’s “market fundamentals” imposed by the Washington Consensus on developing countries in Latin America, Africa, and Asia in the 1990’s imposed global economic integration by way of liberalization, deregulation, and privatization. These have also increasingly become the basis for domestic economic policy in the US– creating super-profits for the US financial elite (aka the 1%), and raising the poverty line within US borders, debunking Obama’s claim that “middle-class economics works,” as the rich few accrue more wealth, and the majority fall into depression.

As of December 2015, the US external debt has reached $19 trillion. The US economy has further moved away from industrial production and become more reliant on financialization– essentially making profit out of putting more Americans in debt, most notably through predatory lending for mortgages, education, personal credit– privatization, and austerity to pull itself out but to no avail. Obama’s claim of a drop in unemployment to 5.5% in 2015 is artificial when it is actually at 9.6%, mainly because it excludes the tens of millions of Americans who are rapidly dropping out of the country’s labor force. Immigration policy is determined largely by the global labor market’s demands for cheap, flexible, and exploitable labor. Staple neoliberal practices of privatization and austerity mean unprecedented loss and lack of recovery of public-sector jobs. Exclusivity and wealth disparity, especially along racial and gender lines, are growing. According to a report released by the Urban Institute, white families on average have seven times the wealth of African American families and six times the wealth of Hispanic families.

Plain and simple, not everyone has a fair shot to “make it” in America. In fact, most don’t.

Obama’s claims of aspiring to make technology work for us, especially in solving the climate crisis and wanting to keep America safe and lead the world without “becoming its policeman” are also misleading and problematic, particularly when it comes to neoliberalism’s push for hyper-militarism.

In both foreign and domestic policy, the US government continues to push for greater militarism. The US government spends more on military production and warfare than any other country in the world. Military production and defense spending dominated the 2015 federal budget at nearly USD 600 billion. In addition to funding and arming militaries and paramilitaries around the world, the US maintains nearly 800 military bases in over 70 countries. In 2014, the costs of US military intervention around the world cost US taxpayers approximately $100 billion. While creating the illusion of a unipolar world under US imperialism, more and more imperialist and advanced capitalist countries are looking to compete with and isolate US hegemony. The world is fed up with US domination and does not look to the US for leadership. Multi-polarity and competition amongst imperialist powers for markets, territories, and natural resources is a proven recipe for endless global warfare.

Within US borders, law enforcement is also hyper-militarized and hyper-aggressive, most notably the police and Immigration Customs and Enforcement (ICE). The impunity granted to militarized law enforcement to kill, arrest, attack, detain, and deport speaks directly to the profitability of criminalization, state brutality and repression, especially in the context of a white supremacist, racist, xenophobic, bigoted, enemy-fearing, and anti-immigrant society.

Furthermore, the Pentagon remains the largest user of petroleum products and energy in the world, yet remains exempt from international climate agreements. The US military and US war production remain one of the biggest perpetrators of the global climate crisis.

Another staple of neoliberalism is the push for so-called “free-trade agreements.” While 20 years of the North Atlantic Free Trade Agreement (NAFTA) proved disastrous particularly for economies in Latin America, destroying agricultural industries, impoverishing and forcing tens of millions to migrate for survival, the secretly-negotiated, and much larger Trans-Pacific Partnership (TPP) grossly goes beyond the scope of international trade and commerce, but also stresses defense and security of US economic interests in the Asia-Pacific region, home to the largest market for US exports. This inadvertently pushes for greater US militarization in the Asia-Pacific region in order to secure US economic hegemony by way of a so-called “Pivot to Asia.”

With the decline of the manufacturing sector due to outsourcing, the US financial elite has a found a multi-billion dollar cash cow in prison labor. The Corrections Corporation of America (CCA) and The GEO Group are just two of the largest for-profit prison corporations that powerfully influence Washington D.C. to enact policies on aggressive criminalization and detention. In fact, many 2016 electoral candidates have direct ties or are supported by the private prison corporate lobby.

The US holds 25% of the world’s prisoners.  Approximately 13 million people are introduced to American jails in any given year, despite a decline in violent crime.  As the population behind bars increases, more and more corporations turn to prisoners  for cheap and/or free labor. These corporations include Starbucks, Victoria’s Secret, Whole Foods, and American Airlines.

The massive raids, detentions, and deportations of immigrants and hyper-criminalization of youth of color, especially Black and Latino youth, by the Obama administration must be seen in this context super-profitable as well.

Under neoliberalism, Americans are neither safe nor secure nationally from climate change.

Obama claims the future we want is in our reach, but US government policies have set us on a path to crisis after crisis. The rhetoric of “We the People” and “better politics” can only be genuinely actualized through united people’s struggle and mass movement that challenges the rule of financial oligarchy and corporate empire. This means active resistance to neoliberalism, the united front of workers and oppressed peoples, and the development of people’s alternatives and systems that put human welfare over profit in all spheres.

Around the world, people’s resistance to neoliberalism and US-led monopoly capitalism spreads and grows stronger in many forms, including strikes, protests, student walkouts, armed struggle, and divestments. As people impacted by neoliberalism domestically, Americans must also stand in solidarity and be one with these struggles globally. Only through system change can we reach the future we want. Only the people can make this happen.