National Day of Action Against the Enhanced Defense Cooperation Agreement! 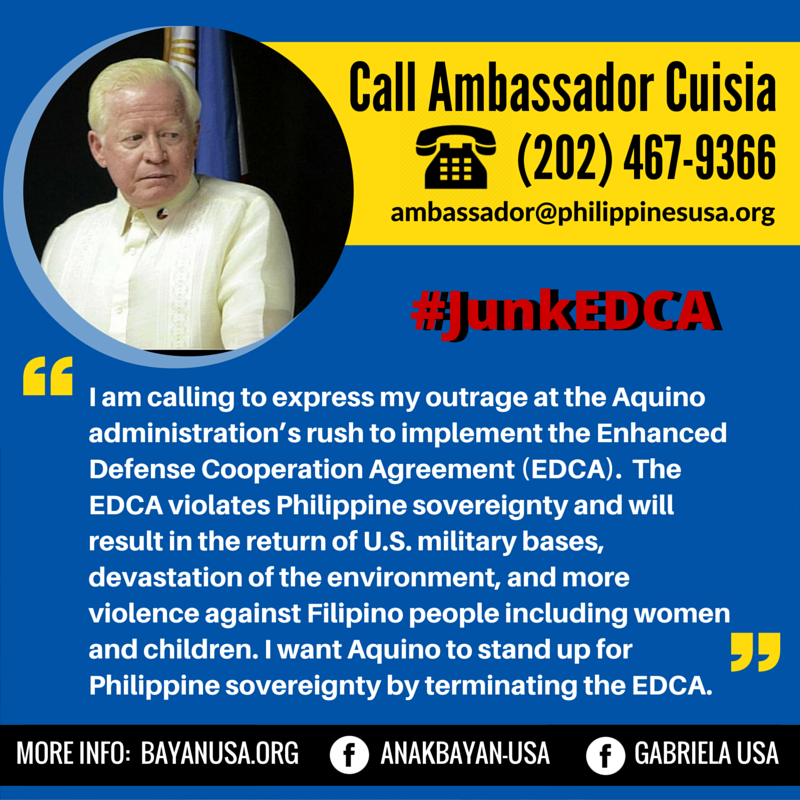 Call the Philippine Embassy in Washington DC to protest the implementation of the EDCA and demand its termination instead!

Office of the Philippine Ambassador to the U.S. (ambassador@philippinesusa.org)

“I am _____, I am calling to express my outrage at the Aquino administration’s rush to implement the Enhanced Defense Cooperation Agreement (EDCA).  The EDCA violates Philippine sovereignty and will result in the return of U.S. military bases, devastation of the environment, and more violence against Filipino people including women and children. I want Aquino to stand up for Philippine sovereignty by terminating the EDCA.”

In April 2014, the US and Philippine governments rushed to sign the Enhanced Defense Cooperation Agreement (EDCA), which grants the U.S. military greater access to and for an indeterminate length of time to military facilities, land, water and airspace in the Philippines, under the guise of “mutual benefit” and the cover of the pre-existing 1999 Visiting Forces Agreement. Aquino is now trying to rush the implementation of the EDCA, despite the fact that the Filipino masses are against U.S. military bases and the U.S. military’s continuing use of our country for war games, a nuclear weapons depot, military “rest and recreation,” and a launching pad for military aggression.

It was the Filipino people’s constant protest against the presence of U.S. bases in the Philippines for decades which pushed the Senate in 1991 to nullify the 1947 US-Philippines Military Bases Agreement.  We need to carry on that legacy by protesting this latest attack on Philippine sovereignty now!