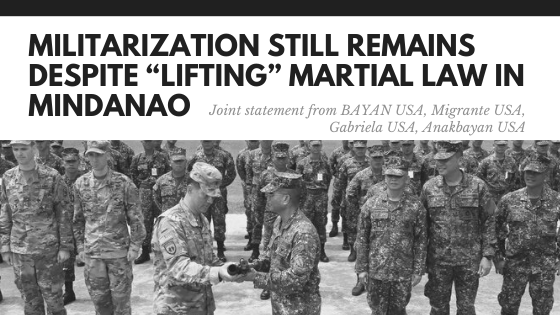 Martial Law in Mindanao has been “lifted” after two and a half years of bombardments, displacement, curfews, checkpoints, among other increased human rights violations. However it remains under a “state of emergency” as described by the Armed Forces of the Philippines (AFP). Our National Democratic alliance of BAYAN USA, composed of Migrante USA, Gabriela USA, and Anakbayan-USA understands this move by the U.S.-Duterte regime as a mere PR stunt, scrubbing the title of “martial law” while the conditions of militarization by both the Philippine and U.S. military will remain in Mindanao.

“While martial law has been lifted, the economic destruction, political persecution and displacement of communities continue. More than 200,000 people are still displaced in Mindanao with 100,000 of them still homeless after the Marawi siege in May 2017,” says Bernadette Herrera, Migrante USA Chairperson. “Meanwhile, the government has readily paved the way for the U.S., China and other foreign countries to benefit from the destruction of Marawi through construction projects, foreign loans and other means,” adds Herrera.

The current state of the Philippines is that a de-facto martial law is in force across the whole country. With Oplan Kapanatagan and Executive Order 70, among other memoranda, the US-Duterte regime has weaponized the civilian bureaucracy to engage in the “whole of nation” counterinsurgency approach, creating a National Task Force to End the Local Communist Armed Conflict (NTFELC). The government departments are organized into twelve “operational clusters” to support military operations against the revolutionary movement as well as groups and individuals opposing Duterte and labeled as “communist fronts” in order to justify violent attacks against them.

“EO70 and M32 have institutionalized Duterte’s counter-insurgency program throughout the entire civilian bureaucracy, so now he has no need for the label of martial law. We are witnessing de facto martial law in effect, through the nationwide crackdown on activists and their organizations, from Negros to the Cordilleras. The AFP and PNP goons of NTFELC are surveilling, harassing, vilifying, charging with fabricated crimes, and murdering farmers, religious leaders, journalists, lawyers, workers, and students who continue to resist the repression of the Duterte regime,” stated Rhonda Ramiro, BAYAN-USA Chair.

“The control that US Military exerts over Mindinao draws parallels to the control exerted over working women’s bodies and livelihoods amidst the semi-feudal and semi-colonial crisis in the Philippines”, stated Irma Shauf-Bajar, Chairperson of Gabriela USA. “ AFP, PNP and CAFGU, the state-sponsored forces who enforced Martial Law in Mindanao,  are directly trained and armed by US tax dollars and personnel. We have seen the devastation and degradation of self determined communities of women and all oppressed masses over the course of this overseas contingency operation.”

The Filipino people will not be fooled by this stunt of the Philippine government. The conditions that stoke conflict in Mindanao—landlessness, the plunder of resources by multinational companies, the lack of dignity and respect for the Moro people, among many others—are still present despite martial law being lifted in name. “We must ramp up, not let up, our fight against these root problems,” asserted Adrian Bonifacio, chairperson of Anakbayan-USA. “The youth—who have been terrorized by martial law in indigenous schools, at agricultural plantations, and at the picket line—must be ready to struggle even harder and lead the next generation in the fight for genuine democracy and independence.”