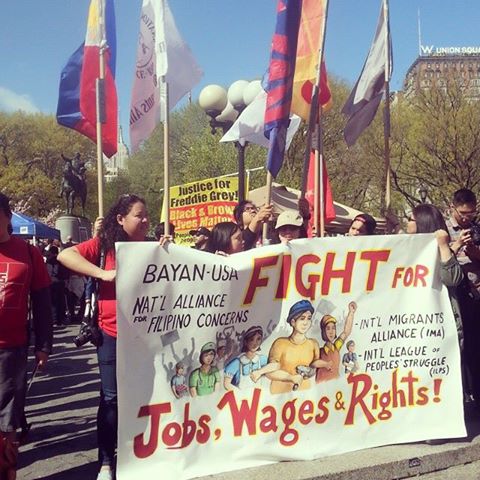 Filipinos across the US, under the banner of BAYAN USA, join millions worldwide in marking May 1 by celebrating the victory of the masses in achieving a reprieve for trafficking victim and migrant worker Mary Jane Veloso. The power of the movement of migrants and workers stopped the execution of Mary Jane, a victim of a trafficking scam which landed her on death row for five years in Indonesia for a crime she did not commit. Philippine President B.S. Aquino virtually abandoned Mary Jane the entire time she languished in jail, and his regime’s bankrupt economic policies, including the Labor Export Policy, have worsened the extreme poverty of the country which drives 6,000 people like Mary Jane to leave the Philippines every day in search of work in the first place.

It was only due to the unwavering actions led by Mary Jane, her family, migrants and workers united with people from all walks of life that this victory was won. This courageous organizing provides the key lesson for the oppressed masses today: that the people united in collective action have the power to enact genuine change.

In the face of imperialist war and occupation abroad, militarized attacks on Black people in Baltimore and all across the US, and neoliberal economic assaults via schemes like the Trans Pacific Partnership (TPP), BAYAN-USA pledges to continue building the anti-imperialist movement including migrant workers to challenge the structures that drive forced migration and reactionary violence, and more importantly, to win our peoples’ struggles for self-determination and genuine sustainable development.