On July 27, Philippine President Rodrigo Duterte delivered his annual State of the Nation Address (SONA). He filled his speech with lies about the government’s successful response to COVID-19, empty promises for overseas Filipino workers, praise for his deadly military and police force, and excuses for not addressing the people’s long-standing aspirations for genuine sovereignty and the right to land. The real state of Duterte’s regime continues to be one of rising fascism and neoliberal “solutions” to the pandemic and poverty. BAYAN USA mobilized across the United States to take action against the rotten Duterte regime, from New York, New Jersey, Philadelphia, and Washington D.C. to Chicago, Texas, Seattle, Portland, San Franscisco-Bay Area, Los Angeles and Hawai’i. 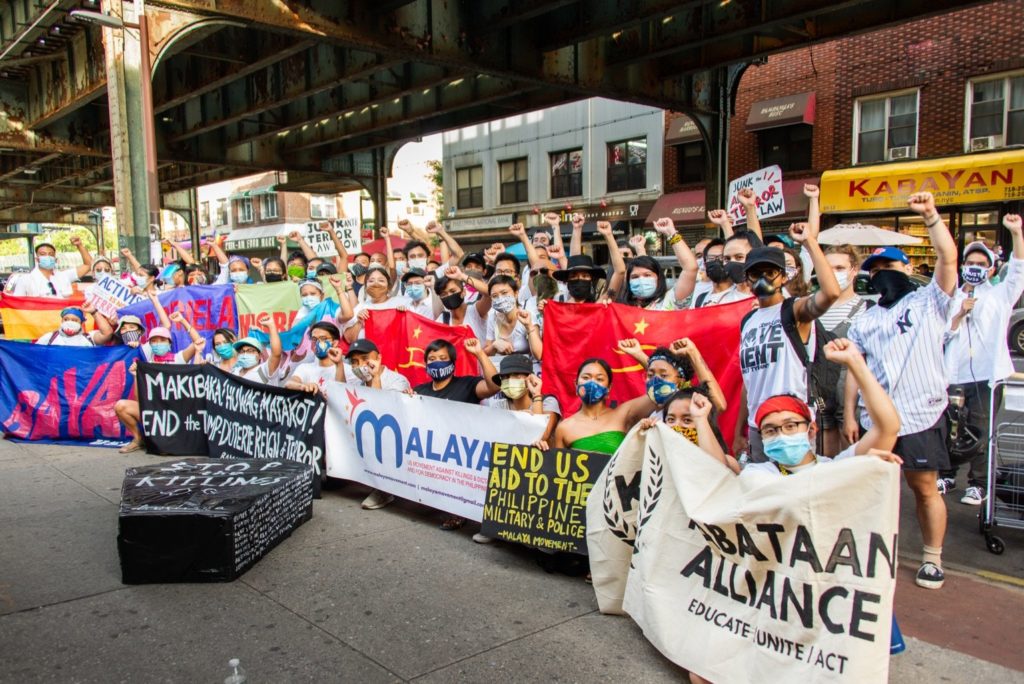 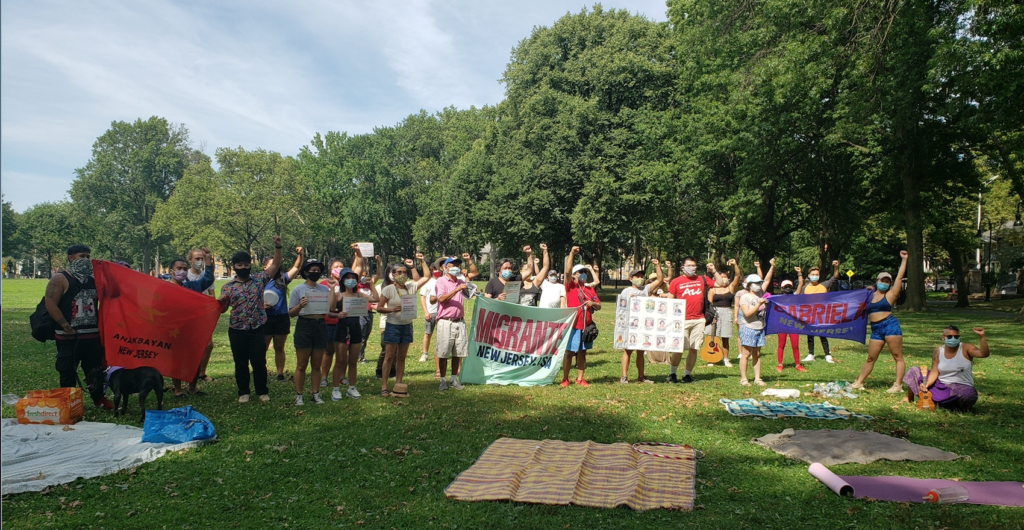 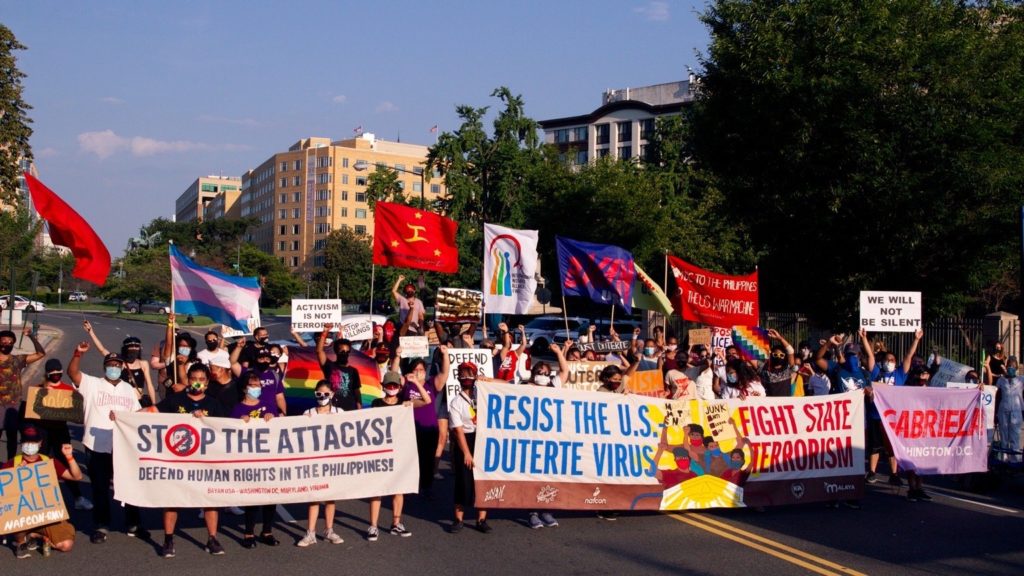 In his address, Duterte spoke of a supposedly untarnished human rights situation in the Philippines. In reality, the masses know that the Duterte regime and its military and police are the number one perpetrator of human rights violations in the country, responsible for the most heinous acts of criminality, corruption, and state terrorism. For over two years Mindanao was placed under formal martial law, there were over 800,000 rights abuses recorded, including over 90 killings and almost 1,500 detentions. These figures do not include the de facto martial law imposed on Negros, Bicol, and Samar through Duterte’s Memorandom Order 32, which resulted in over 100 extrajudicial killings.

Behind these state-sanctioned killings and abuses were the Armed Forces of the Philippines (AFP) and Philippine National Police (PNP), which have amassed even more power since Duterte’s passing of Executive Order 70, which has militarized the entire civilian bureaucracy. 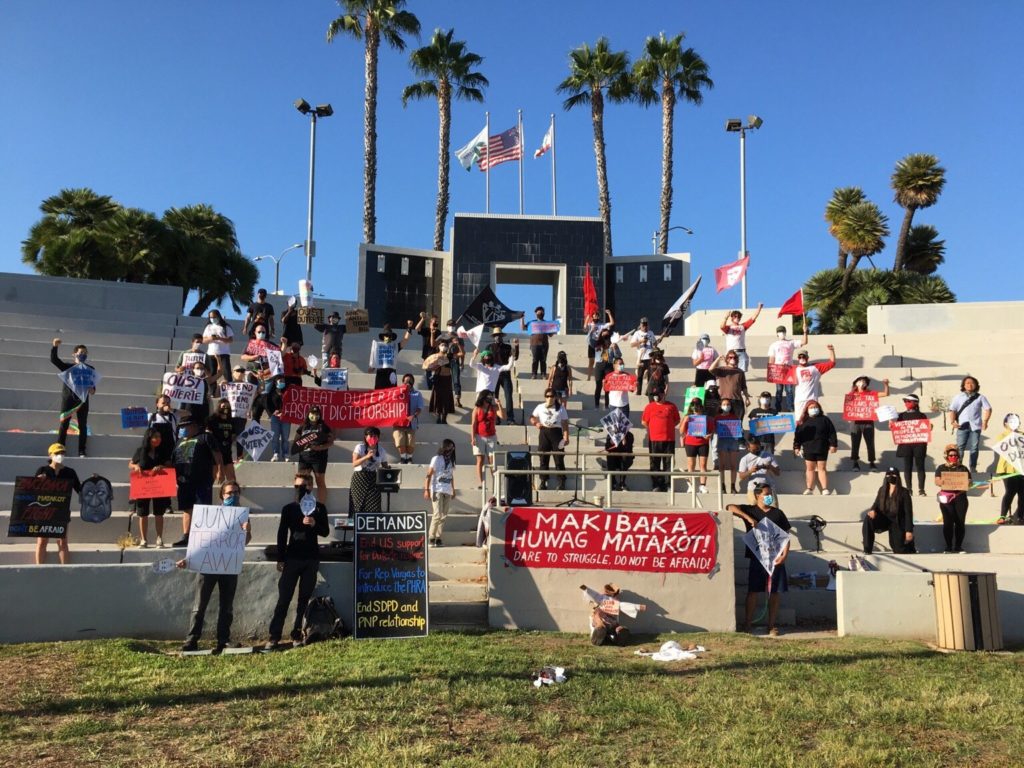 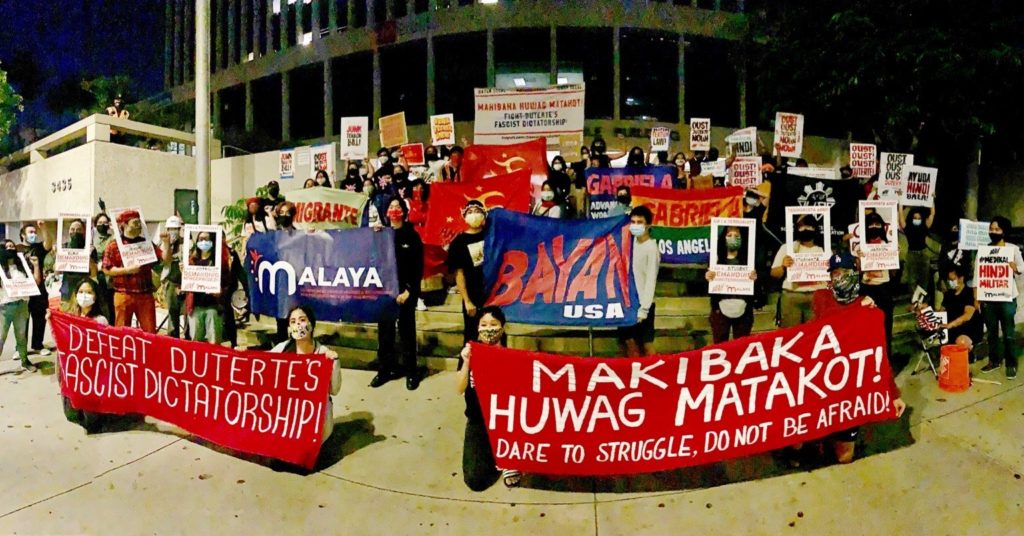 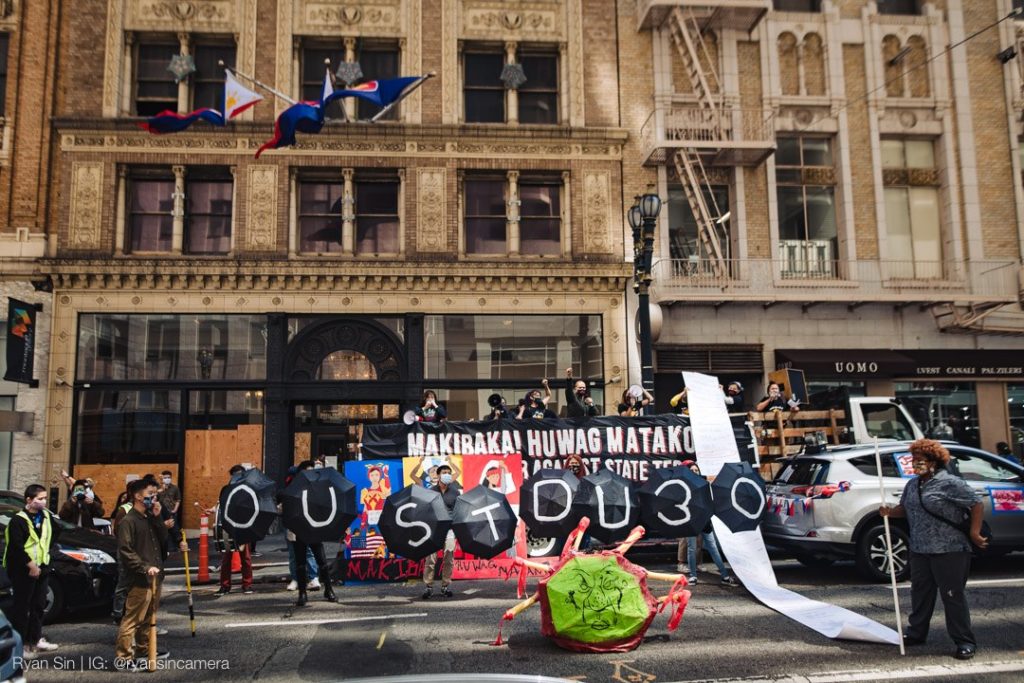 The Anti-Terrorism Act (ATA) signed into law by Duterte is the latest puzzle piece in Duterte’s plan to enact a de facto martial law nation wide. Despite Duterte’s failure to even address the ATA during his SONA, the actions of the police made it clear to the people the intent of the law to brand activism as terrorism. Almost 150 people across the country were arrested on their way to, during, or after protest actions. Dozens more were detained or held up at check points. Even in the United States, activists were met with state surveillance.

COVID-19 and the Duterte Epidemic

Duterte’s failed response to the COVID-19 pandemic was all but covered up during SONA. Duterte failed to provide a comprehensive roadmap to fighting the pandemic, despite recorded cases rising above 82,000 and recorded deaths totaling almost 2,000. Instead, he again turned to his fascist military and police to impose lockdown policies, and more recently Tokhang-style house-to-house tactics to identify possible cases. Free mass testing is still not available to the majority of Filipinos. 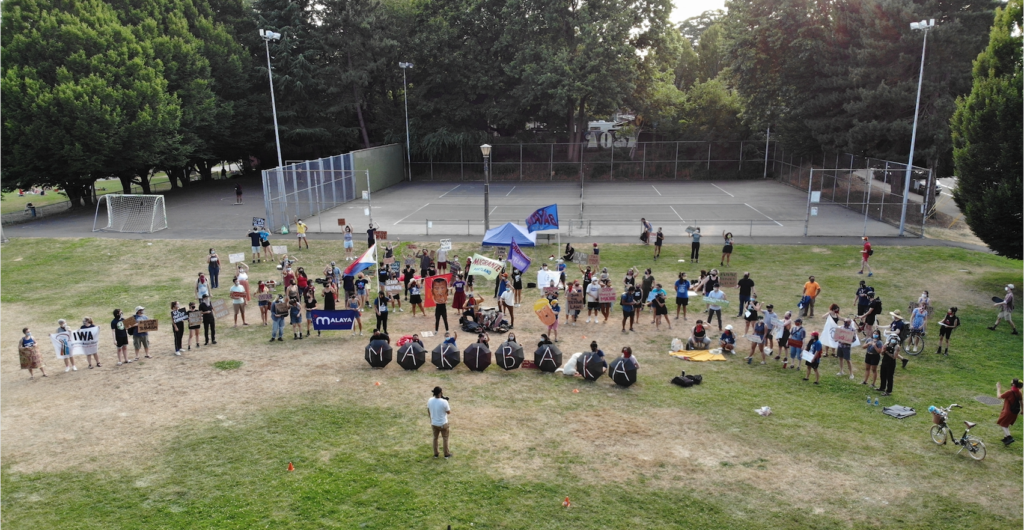 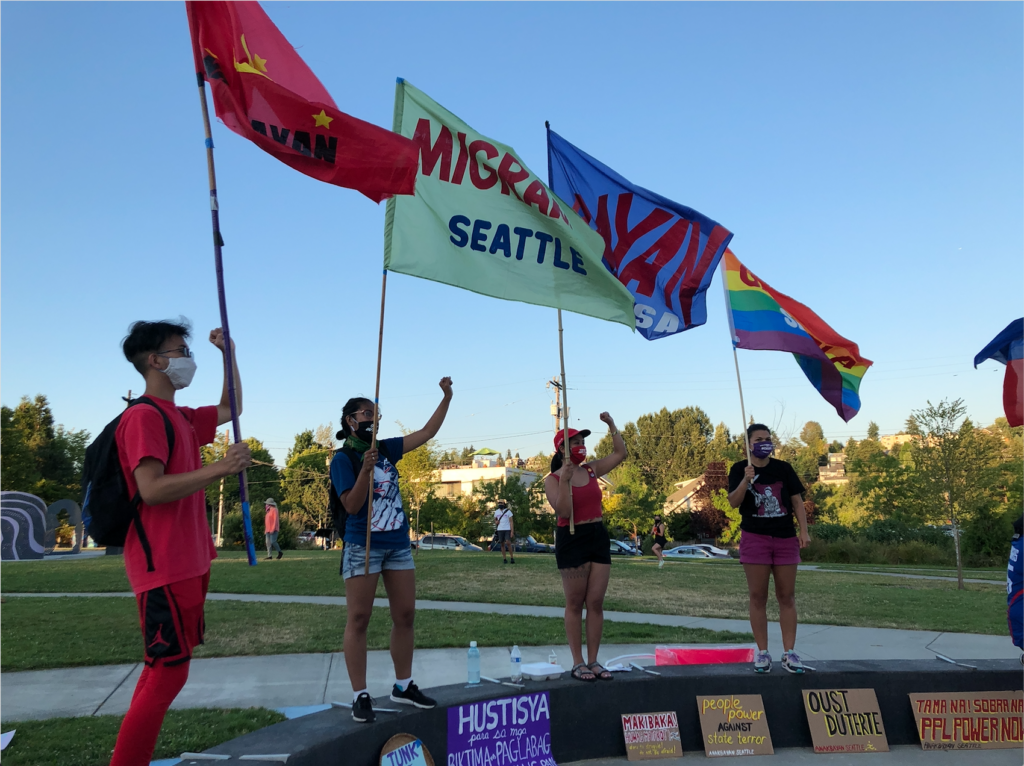 Unemployment and underemployment stand at an all time high, with almost 19 million Filipinos economically displaced due to the pandemic and Duterte’s lockdown policies. The government’s economic aid to alleviate this worsening economic crisis has been slow and riddled with corruption. Malacañang itself reported that as of June 29, 300,000 families had yet to receive government aid, not including the 3.5 million families waitlisted for the first round. And when people like the San Roque 21 took matters to their own hands demanding financial relief, the government jailed them instead.  Duterte’s militarized response to COVID-19 has drawn the ire of the people, with calls for mass testing instead of mass arrests, and aid instead of detention (“tulong, hindi kulong”) resounding throughout the country.

Overseas Filipino workers (OFWs) are not exempt from the masses of people suffering from Duterte’s botched COVID-19 plan. There are over 10 million Filipinos who have left the country to find work abroad. More than 9,000 OFWs have contracted COVID-19, while hundreds of thousands more are unemployed due to the economic impacts of the pandemic on top of an already-failing economy. Filipino seafarers have made international headlines in cases like the Diamond Princess and Grand Princess cruise ships, where workers were trapped on COVID-19 stricken vessels. In Saudi Arabia, some OFWs have been forced to scavenge for food in dumpsters because of the little to no support received from the Philippine government. In the United States, Filipino J-1 Visa holders in the hospitality industry faced mass lay-offs and state neglect as despite working service jobs overseas, they are not even considered OFWs formally and are considered ineligible for state economic relief. Hundreds of OFWs who were repatriated were left stranded at Ninoy Aquino International Airport despite being promised VIP treatment. And tragically, both on land and on sea, OFWs have taken their own lives due to hopelessness amid the pandemic.

On top of Duterte’s criminal abandonment of OFWs, the Philippine government has continued to treat migrants as milking cows for profit. Duterte has not backed down from imposing mandatory PhilHealth insurance membership on Filipino nationals overseas, despite there being no PhilHealth facilities outside of the Philippines. This mandatory membership includes a premium fee of three percent of monthly income, a huge burden for migrant workers who must already pay for excess fees, such as for the Overseas Employment Certificate. 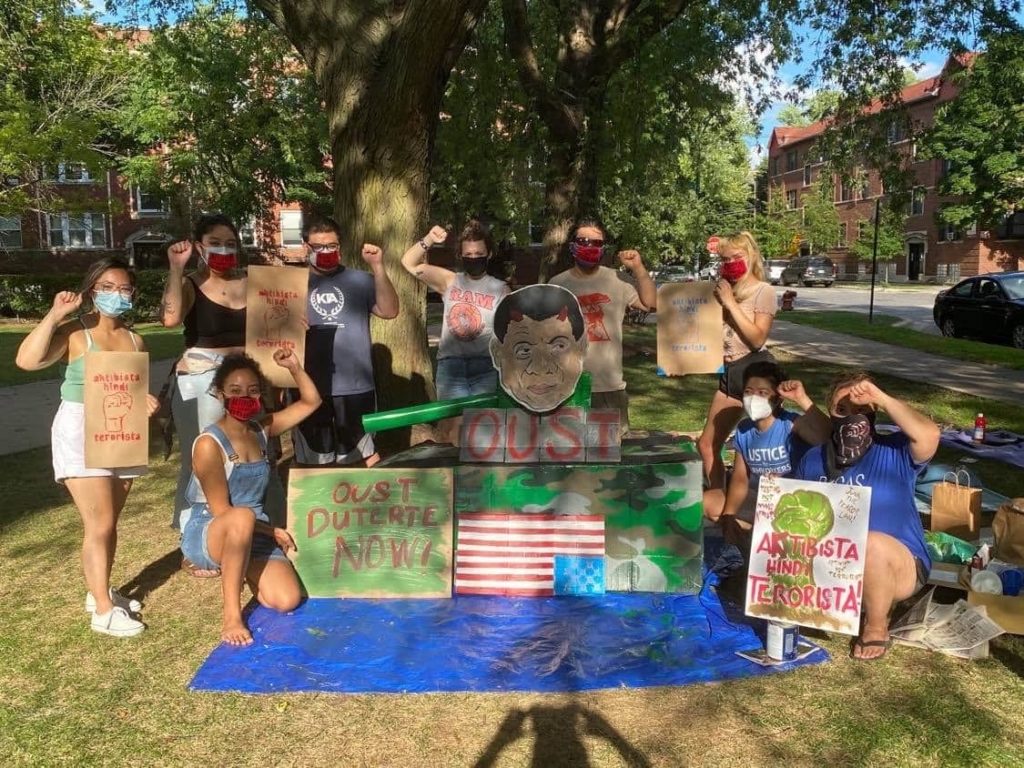 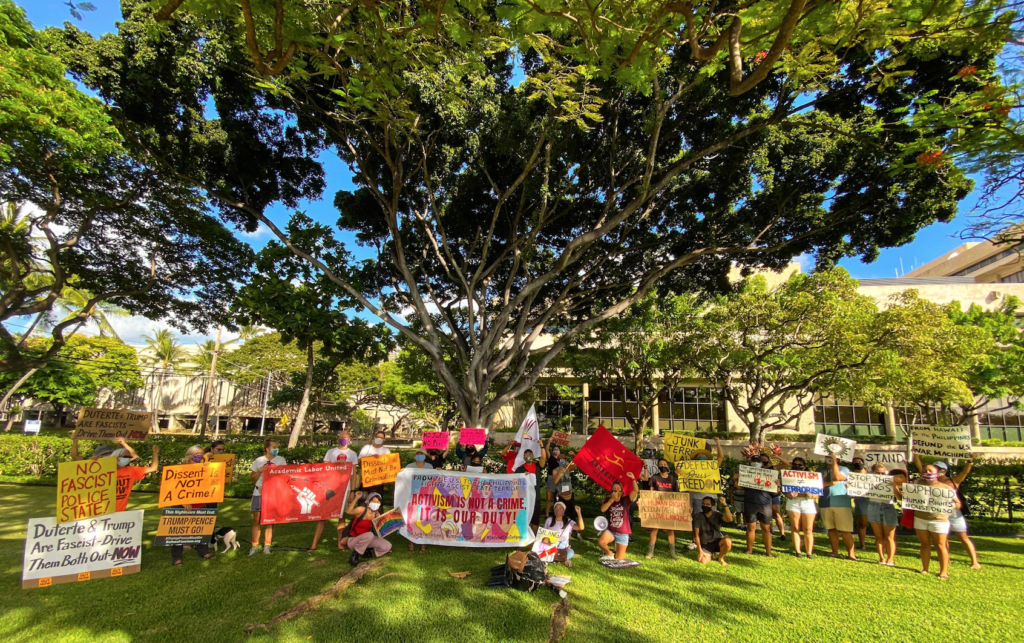 Duterte cannot continue to fool the Filipino masses. The real change that he pretends his regime has accomplished cannot be realized under Duterte’s fascist dictatorship, nor can it be realized under a Philippines still plagued by foreign rule and an economic system that breaks the backs of the peasant farmer and worker majority of the population.

A week prior to Duterte’s SONA, BAYAN-USA released a Declaration of People’s Demands alongside the Malaya Movement, which has now been signed by 35 additional organizations and almost 300 individuals. The demands include: Scrap the Anti-Terror Law; Ensure free mass testing, healthcare, and livelihood in the face of the pandemic; Ensure the rights, welfare, and protection of migrant workers; Pass the Philippine Human Rights Act in the US; and Expel the Philippine National Police (PNP) from the US.

Beyond the points outlined in the Declaration of People’s Demands, BAYAN USA recognizes that to enact lasting systemic change, we must struggle against imperialism, feudalism, and bureaucrat capitalism. Duterte’s 5th SONA proved that he is not on the side of the people in this struggle. In addition to the crimes listed above, he also refused to confront Chinese aggression while saying nothing about his arms deal with the US that would cost $2 billion and continued to push for the neoliberal National Land Use Act rather than genuine agrarian reform.

Let us not wait another year for Duterte to come back to the people with more fairytales. BAYAN USA calls on Filipinos across the US to build the people’s political power to bring down Duterte’s fascist rule, struggle for genuine independence and democracy for the masses of people, and construct a socialist alternative that will prioritize people over profit. Only through the national democratic struggle with a socialist perspective—the struggle of the toiling masses of the Filipino people—can we defeat state fascism, fight COVID-19, and ensure the rights of Filipinos across our homeland in and every corner of the globe. 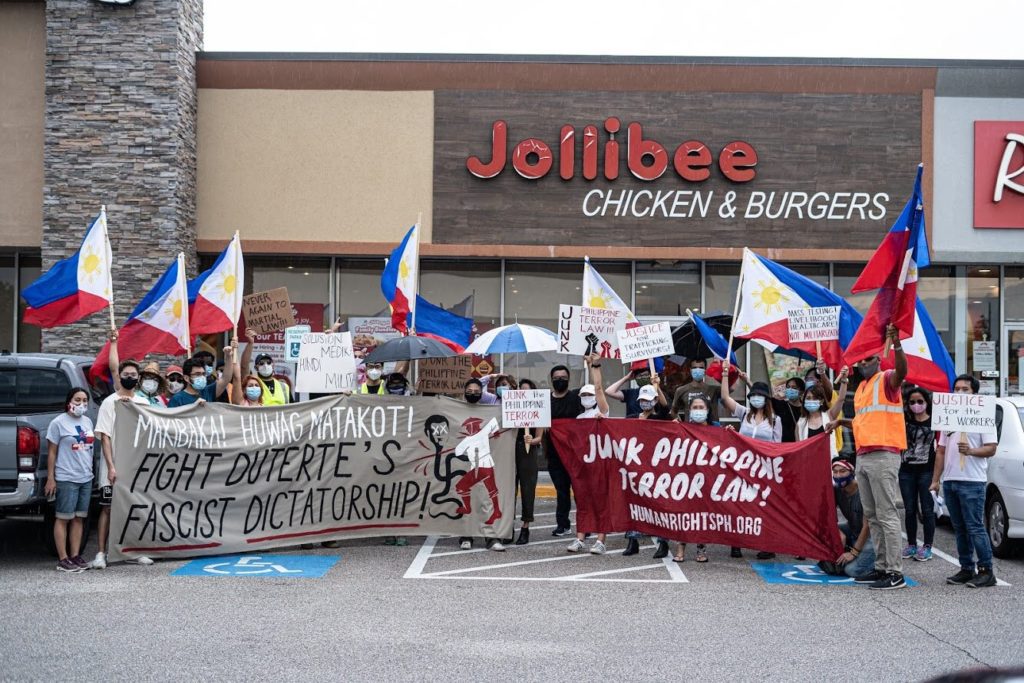 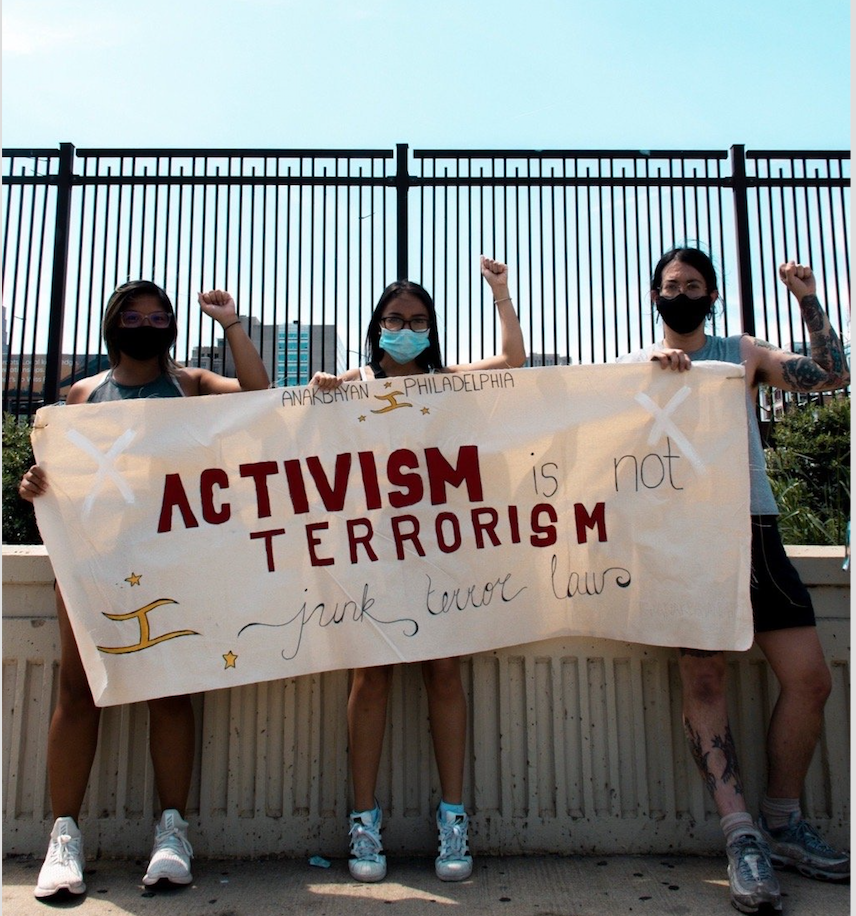