Los Angeles–“US workers and labor unions should raise their voices against the gross human rights violations inflicted on their fellow workers, labor unions and other sectors in the Philippines,” appealed Elmer “Ka Bong” Labog, the chairperson of Kilusang Mayo Uno (KMU) or May 1st Movement, the largest labor center in the Philippines.  He spoke at the UCLA Labor Center on December 4 among a number of people from diverse ethnicities. 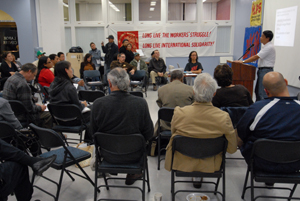 Labog was a hotel worker organizer before getting elected as Chairperson of KMU, as Vice President of the Bagong Alyansang Makabayan or BAYAN (New Patriotic Alliance) and as Second Deputy General Secretary of the International League of Peoples’ Struggles (ILPS).

Labog’s history-making tour marks the first time that a leader from KMU has been allowed to enter the United States since it was founded in 1980.  Over the years, large unions in the US invited past leaders of the KMU to no avail.  The steadfast militant character of the KMU is the reason why.

BAYAN USA, an alliance of twelve Filipino social justice organizations in the United States, helped organize Labog’s three-week tour, in partnership with the Institute of East Asian Studies at the University of California at Berkeley.  He made speaking engagements in San Francisco, Seattle, Vancouver in Canada, Los Angeles, Tijuana in Mexico, and San Diego. 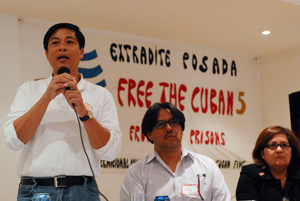 “Linking Human Rights and Workers’ Struggles Around the World,” was the theme of Labog’s talks in Southern California.  It was a rare opportunity where Filipino Americans heard first-hand from an esteemed labor leader about the widespread human rights abuses and labor repression in the Philippines and their connection to the US tax dollars.  Labog said, “the US military aid to the Philippines, which is the biggest in Asia, is continuing to help the repressive Arroyo regime in quelling dissent to its oppressive and anti-people policies.”  Since the ascension of Gloria Macapagal-Arroyo into power in 2001, there had been 22 KMU members killed, and three enforced disappearances.

Recently, labor lawyer Remigio Saladero, chief legal counsel of KMU and Board Chairperson of the Pro-Labor Legal Assistance was arrested on false charges of murder.  Saladero’s baseless detention affects countless other victims of human rights abuses, as he was handling nearly 700 labor cases before various tribunals.  Saladero is one of the 72 people in Southern Luzon targeted to be arrested and jailed because of trumped-up accusations. 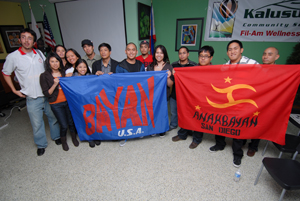 These workers murders, enforced disappearances and illegal arrests are part of the unbridled human rights abuses of the government of Arroyo. To date, there are now more than a thousand extra-judicial killings, and 199 disappearances, scores are being jailed on false charges, and thousands of people in the provinces are becoming internal refugees.

The KMU, and its Chairperson Elmer Labog are no strangers to repression by the US-backed Philippine government.  Countless leaders of KMU, such Felixberto Olalia and Crispin Beltran, were jailed for staunchly defending workers’ rights. Labog was also jailed during the martial law regime of Ferdinand Marcos.

Labog also extended an invitation to the 25th anniversary of the International Solidarity Affair (ISA) taking place in the Philippines from April 29 to May 10, 2009.  The ISA is an opportunity for labor organizers from all over the world to share the struggles in their respective countries and to network and build solidarity.