Justice for the Victims of Davao Bombing:

No to Increasing U.S. and AFP Militarization in Mindanao

BAYAN-USA condemns the fatal bombing that took place September 2nd in Davao City, killing 14 people and injuring more than 60 people at the night market. We send our condolences to the families of the victims. We demand justice for the people of Davao. There is no justification for the deliberate targeting of innocent civilians with violence to sow fear.

We also express alarm at the possibility that the general rights of the people will be trampled in the wake of this tragedy. As a response to this attack, President Duterte declared a “state of lawless violence” which increases military and police presence with the stated intent to combat terrorist threats not only in Davao, but throughout the country, including the campaign against illegal drugs. We join the people in demanding that the parameters of this declaration be clearly defined and not allowed to violate civil rights and liberties.

We also condemn any attempts by the Obama administration to destabilize and increase its military intervention the Philippines under the so-called auspices of anti-terrorism. The U.S. government has a long history of destabilization operations in Mindanao, including but not limited to covert CIA operations, drone surveillance, and bomb planting. In 2002, a CIA agent by the name of Michael Meiring accidentally blew up his legs while creating a bomb in his hotel room in Davao City. It must be also noted that the group that claimed responsibility for the September 2 bombing– Abu Sayyaf– was trained and funded by the CIA and has been conveniently used as a bogey to justify militarization in Mindanao and around the country for years. The Abu Sayyaf kidnap-for-ransom operations in Basilan in 2001 became the rallying call for the Bush administration to declare the Philippines the “Second Front to the Global War on Terror,” allowing for the massive deployment of U.S. special operations forces and other military personnel for counter-terrorism operations in 2002.

The U.S. government is a master crafter of destabilization and counterinsurgency, including under the guise of “humanitarianism,” “disaster relief” and “foreign aid,” in regions where it holds key geopolitical interests. We oppose increasing military operations, stationing of personnel, occupying bases and drone exercises in the Philippines. The U.S. War on Terror in Mindanao in 2001 and signing the Enhanced Defense Cooperation Agreement in 2014 did not prevent this heinous attack; increased collaboration with the U.S. military and intelligence apparatuses will mean future attacks. The only security these operations and agreements have provided have been to safeguard the interests of U.S. and foreign corporations for access to Mindanao’s great deposits and reserves of oil, gold, nickel, bauxite and many other natural resources.

President Duterte, as Mayor of Davao City for 22 years, understands the hand of U.S. intervention in sowing conflict and crisis for the people of Mindanao. As he meets with President Obama this September 6, we call on Duterte to not cave into to pressure for more U.S. aid to the Philippines but to stand for national sovereignty, including swift investigation of the bombing by Philippine authorities and holding those responsible accountable. 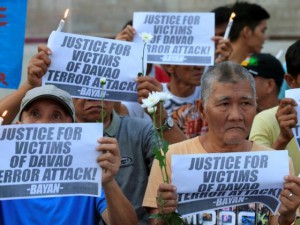 Rallyists display placards condemning the bombing at a market in Davao city during a candlelight protest in front of the Catholic church in Quiapo city, metro Manila. Photo: Reuters 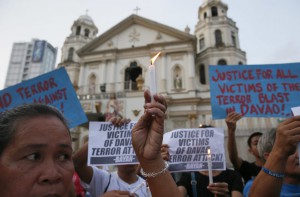