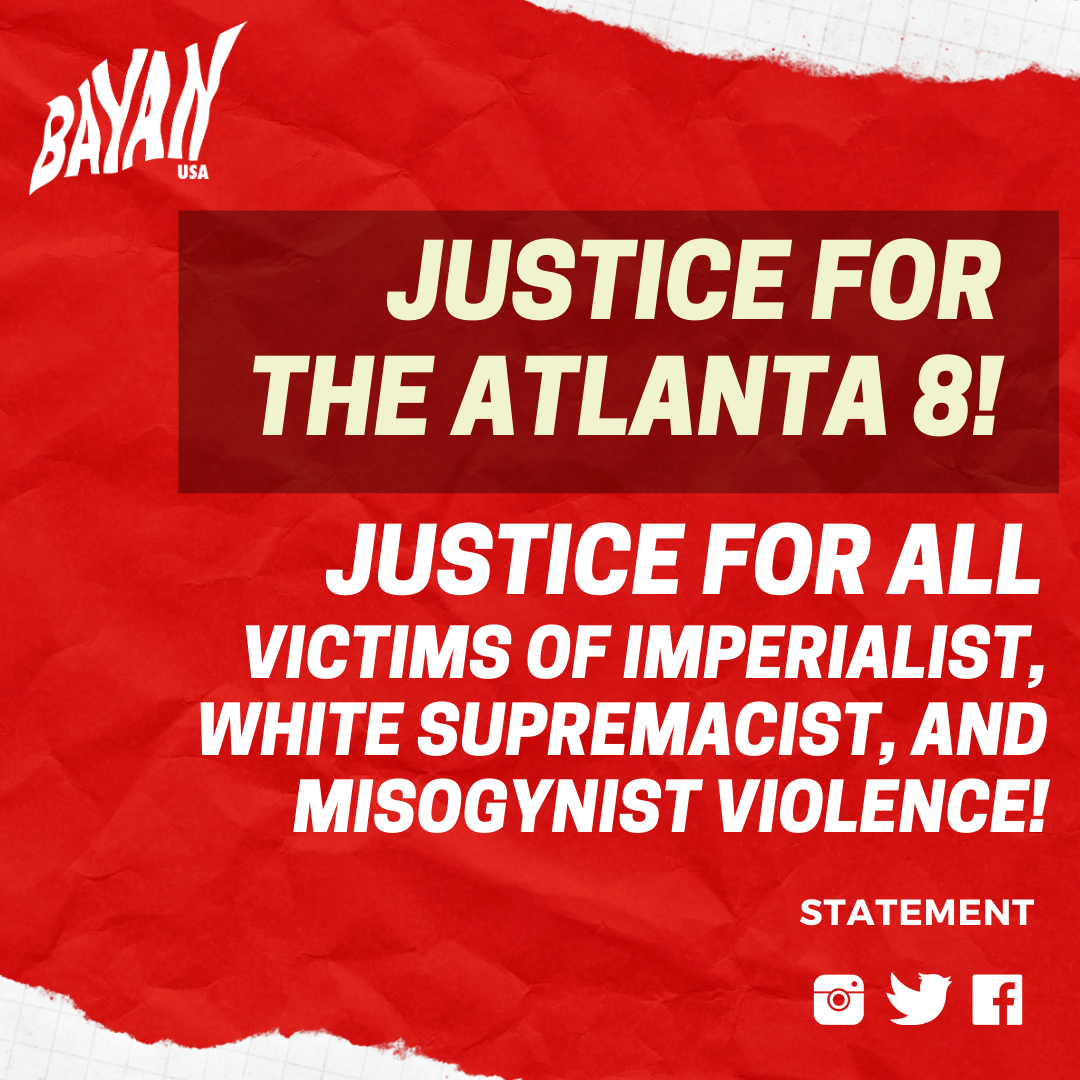 BAYAN USA joins in the community’s rage and grief over the mass shooting in Atlanta that killed eight people on March 17th, 2021. The lives lost are not just statistics, their names are: Delaina Ashley Yaun, Paul Andre Michels, Xiaojie Tan, Daoyou Feng, Julie Park, Hyeon Jeong Park, and two more victims who have yet to be identified.

We cannot ignore that this latest massacre is the latest in a surge of violence against Asian American and Pacific Islander communities since the start of the COVID-19 pandemic. According to Stop AAPI Hate, there have been 3,795 “hate incidents” from March 2020 to February 2021. While we hold the murderers and perpetrators of these crimes accountable, BAYAN USA also places responsibility in the hands of the state, which has grossly mishandled the pandemic and scapegoated, both directly and indirectly, the Asian community for it. In the US alone, 10 million people faced unemployment as of February 2021, with 538,000 COVID-related deaths and only 12% of the population accessing vaccinations.

Rather than addressing the people’s economic and health needs and promoting a scientific understanding of the pandemic, the Trump presidency and corporate media whipped up mass hysteria against people of Asian descent with racist terms like the “China virus” and “kung flu,” which only served to empower attacks in the past year. This culture permeates US society even with Trump out of office, with Biden recently rejecting the World Health Organization’s findings that COVID19 was “extremely unlikely” to have originated in a Chinese lab, echoing a Trump conspiracy theory.

Yet attacks against Asian communities did not just begin with the pandemic. The United States has a violent history of enacting laws and policies that target those of Asian descent, such as the Asian Exclusion Act of 1924, the mass internment of Japanese Americans during World War II, and the mob riots against Filipino migrant agricultural workers, just to name a few. In the present-day, we see this state violence in the mass exploitation and targeting of Asian migrant workers by state forces like ICE and the police.

If we continue to dig at the roots, state violence experienced by our communities in the US is inextricably tied to the imperialist colonization of our home countries. In its thirst for wealth and power, the US occupied, pillaged, raped, and massacred millions. Colonization solidified the racist and misogynist character of these attacks to reinforce imperialist exploitation of land and people. The hate crimes and murders we have seen throughout US history up until the present day are mirrors of the imperialist violence that continues to be committed abroad. In particular, attacks against Asian women are rooted in the ongoing history of poor and working class women being forced to provide “rest and relaxation” for white foreigners, especially those in the military, in order to survive.

Fighting against imperialist state violence and the widespread racist and misogynist brutality it enables is not just a battle for the Asian American community. It is one we must link together with Black, Indigenous, Muslim, trans, and all communities oppressed under capitalism, especially the working class and poor. It is also a fight that extends beyond US borders, especially with the Biden administration set to establish a $27.4 billion network of precision-strike missiles across Taiwan, Okinawa, the Philippines and other countries to deter China.

We reiterate that we will win this fight with our own hands in an organized and internationalist mass movement directed against this rotten system. We must reject any attempts to “protect” our communities through increased militarization and policing, which perpetrate such violence to begin with. Together, let us demand justice for the victims of the Atlanta 8, justice for their families, and justice for all victims of imperialist, white supremacist, and misogynist violence. Together, let us tear imperialism down from all corners of the globe.