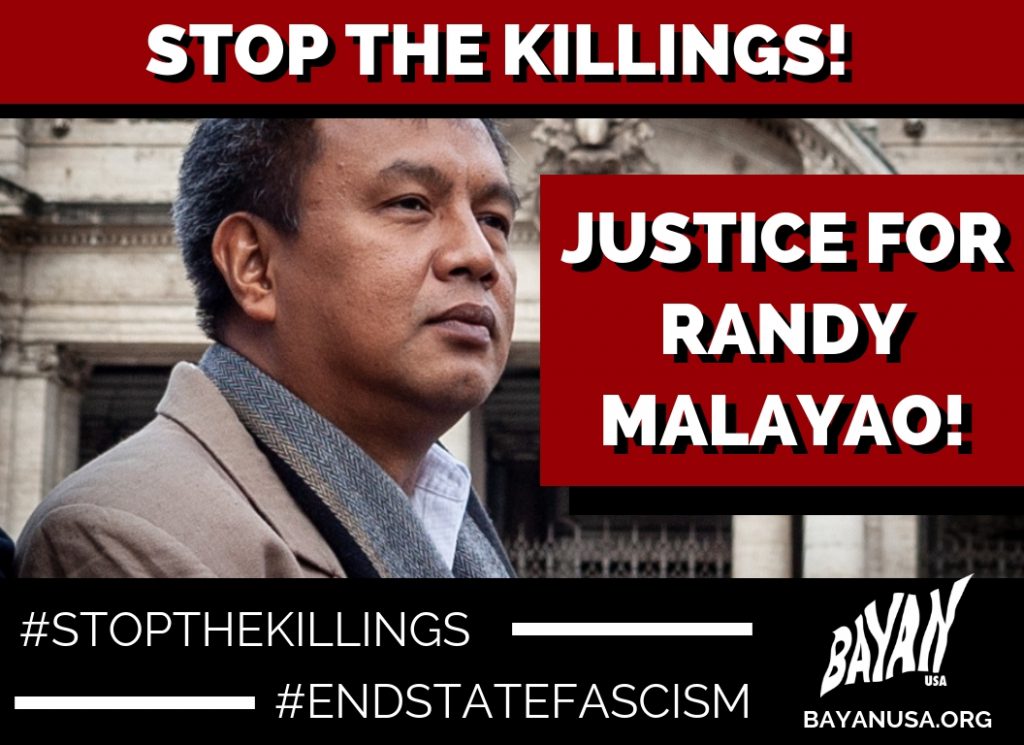 JUSTICE FOR ALL VICTIMS OF EXTRAJUDICIAL KILLINGS AND STATE VIOLENCE UNDER THE DUTERTE REGIME!

BAYAN USA condemns the cold-blooded murder of Randy Felix Malayao, 49 years old, one of the youngest peace consultants of the National Democratic Front of the Philippines (NDFP), a multi-sectoral revolutionary alliance.  On January 30th, Malayao was taking the bus in Aritao, Nueva Vizcaya on his way home around 2:00am when a gunman slipped into the bus and shot him twice while he was sleeping.

Malayao is one of over 170 victims of politically motivated, state-sponsored extrajudicial killings as Duterte continues his rampage and counter-insurgency campaign against critics and human rights groups.  “The Duterte regime continues to sabotage any chance of peace by assassinating Malayao, NDFP consultants, and other human rights defenders whose life’s work is to serve the interests of the poor and oppressed,” BAYAN-USA Chairperson Rhonda Ramiro said.

In 2008, Malayao became a political prisoner and faced heavy torture under then President Gloria Macapagal-Arroyo, and trumped up charges were dropped only after suffering four years of unjust imprisonment.  Malayao was widely-known as a human rights defender and served as the regional coordinator of progressive BAYAN MUNA partylist, and as a a spokesperson and representative of the NDFP during peace negotiations with the Government of the Republic of the Philippines (GRP) in Oslo, Norway.

As an official NDFP peace consultant, Malayao was supposed to be guaranteed safety under the Joint Agreement on Safety and Immunity Guarantee (JASIG).  Last year, Duterte cancelled the peace talks right before the next agenda item was to tackle much needed socio-economic reforms, in which the NDFP was to present their Comprehensive Agreement on Socio-Economic Reforms (CASER).

“Duterte employs state-sponsored terrorism against the people.  He utilizes the drug war, martial law, and counter-insurgency programs as a desperate attempt to dodge responsibility for the failing economy, the skyrocketing costs of living, widespread poverty, increasing displacement of indigenous people, and civil unrest,” said Ramiro.

While Duterte places crosshair targets on the backs of human rights defenders, the people are left with no choice but to fight back and grow the movement to oppose this fascist dictatorship.  He has endangered the lives of poor peasants, workers, women, bishops, journalists, teachers, students, indigenous people, and more.

She continued, “For every loss of life under this regime, the people are reminded that it is Duterte himself that is the true enemy, and he is fearful of the unity and strength of the people to overthrow his corrupt dictatorship.  We vow to continue the struggle Randy valiantly led to serve the most oppressed and expose this rotten regime.”

BAYAN-USA is an alliance of 26 progressive Filipino organizations in the U.S. representing students, scholars, women, workers, artists, and youth. As the first and largest international chapter of Bagong Alyansang Makabayan (BAYAN-Philippines), BAYAN-USA serves as an information bureau for the national democratic movement of the Philippines and as a center for educating, organizing, and mobilizing anti-imperialist and progressive Filipinos in the U.S. For more information, visit www.bayanusa.org