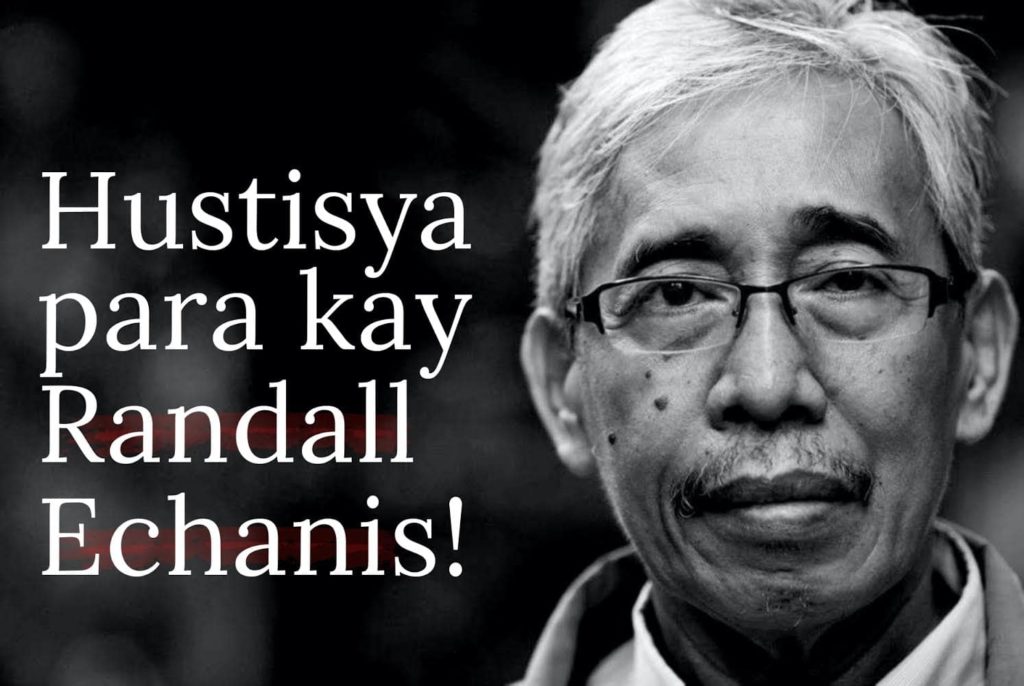 BAYAN-USA, and all our national democratic mass organizations condemn the brutal slaying of longtime peasant organizer and peace advocate Randall “Ka Randy” Echanis. A leading advocate for the rights of the peasants and farm workers in the Philippines, Ka Randy was the national secretary-general of the Kilusang Magbubukid ng Pilipinas (Peasant Movement of the Philippines.) As the chairperson of Anakpawis partylist, Ka Randy also helped author and advance pro-farmer and pro-people legislation including the Genuine Agrarian Reform Bill. Ka Randy was the second national leader of people’s organizations to be murdered by the Duterte regime this year, after the killing of Carlito Badion, the secretary general of Kadamay.

Having been a peace advocate for decades, Ka Randy also contributed to peace negotiations between the National Democratic Front of the Philippines (NDFP) and successive administrations of the Government of the Republic of the Philippines (GRP). His decades of experience and efforts in fighting for land justice and agrarian reform were incorporated into the Comprehensive Agreement on Socio-Economic Reforms (CASER), which is seen as the main content of the peace negotiations.

BAYAN-USA joins the Kilusang Magbubukid ng Pilipinas in demanding justice for Ka Randy who fought tirelessly for the rights of the majority of Filipinos. The Philippines is rich in natural resources, culture, and people, but the morally bankrupt system keeps the vast majority of Filipinos in poverty. It is a system wherein the urban workers who build the wealth and infrastructure of the country are themselves forced to live in crammed shantytowns. It is a system wherein the peasant majority who produce and harvest food are themselves starving. It is precisely in these desperate conditions that people’s heroes and peace advocates like Randall Echanis are forged. It is in these desperate conditions that thousands of Filipinos are driven to join the growing movement against the fascist Duterte regime.

The Duterte regime is increasingly choking the legal means through which the Filipino people can demand their rights. With the implementation of the Anti-Terror Law, the Duterte regime has legalized red-tagging of organizations like KMP, as well as everyday citizens who are vocal and critical of the Duterte regime, but it will never legitimize the brutality and violence that is being perpetrated by elements of the State. Ka Randy’s murder in Quezon City proves that even activists in the National Capital Region are not safe under these fascist conditions. It also proves that the Duterte regime will do anything in its power to maintain control over a country that is rising up to resist against him and his cronies.

The brutality and fascism of the Duterte regime pushes the peasantry to join the ranks of those engaging in armed struggle in the New People’s army and in the current Philippine revolution. The people’s war in the countryside has grown larger with every fascist move of the Duterte regime and by killing the very people who are advocating and pushing for peace through the Peace Negotiations, the ruling classes have sealed their own fate.

“The Duterte regime has created a martyr with the vicious slaying of Ka Randy. But Ka Randy’s spirit lives on in the program for free land distribution contained in the CASER; in the courageous resistance of peasants to land grabbing and the tyranny of the feudal landlords; and in the swelling movement for a genuine just and lasting peace in the Philippines,” said Rhonda Ramiro, BAYAN-USA Chairperson. “As BAYAN USA mourns the death of Ka Randy, we will honor his life by continuing to contribute to the advance of the struggle against the root causes of poverty in the Philippines, for agrarian reform and national industrialization, and towards victory of the national democratic movement.”