Stop the Repression & Silencing of Activists! 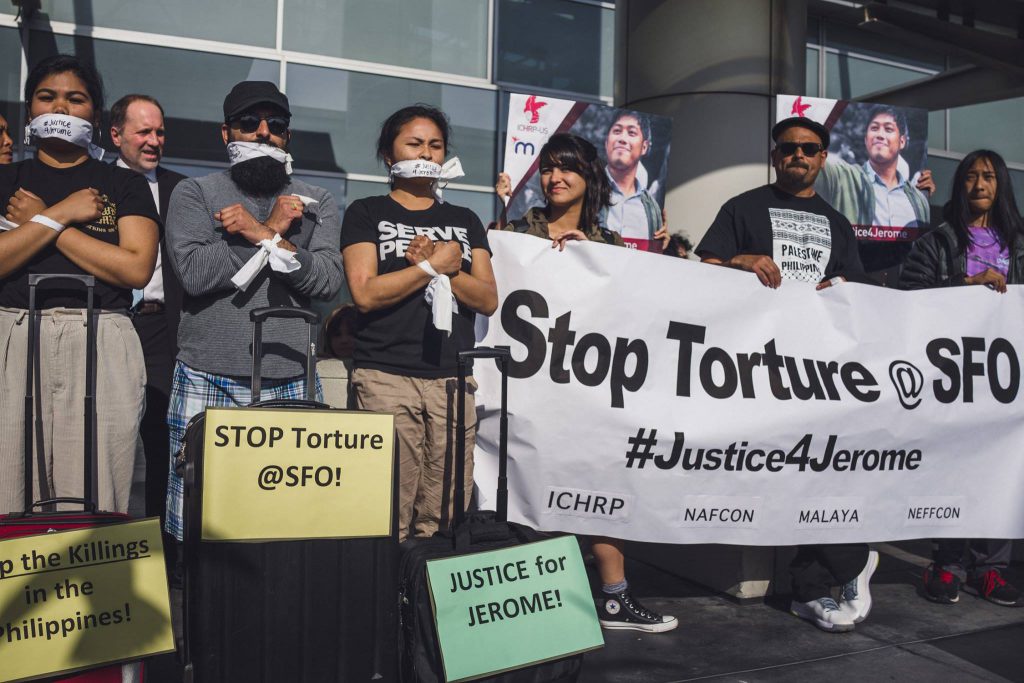 The torture and interrogation of Jerome Succor Aba last April 17-19 at the hands of the Customs and Border Protection Agency (CBP) at the San Francisco International Airport is not an isolated case. It is part of a growing pattern of political repression under the US-backed Duterte regime to silence government critics and activists who are speaking the truth of the escalating fascism of the Duterte government in the Philippines.

The CBP’s line of questioning of Aba and subsequent denial of any mistreatment not only speaks to US government cover up of the incident– akin to the US government’s denial of its torture practices in Guantanamo and Abu Ghraib and routine abuse of migrants at border crossings– but concerted collusion with the Philippine government in its repression of activists who, like Aba, expose the role of the US support to Duterte’s increasingly fascist rule.

Despite having a valid US visa and official invitations by church institutions and community organizations to speak at multiple events in the US, Aba was treated as an enemy combatant and subjected to rendition-style interrogation, including being forced to strip naked in front of an industrial fan blowing cold air. He was repeatedly asked if he was a “terrorist” or “communist,” of his affiliations with renowned mass leaders in the Philippines, and his opinion of US and Philippine political relations by CBP officials, who held him for 28 hours without access to a lawyer.

Aba came to the US upon the invitation of several church organizations to share the situation in Mindanao under Duterte’s martial law. Aba is a Moro youth leader with Suara Bangsamoro, an organization uniting the Moro people for genuine peace based on justice in Mindanao, and to struggle against foreign incursion as the Moro territories are rich in mineral wealth and natural gas, namely with the Liguasan Marsh situated there. Aba’s human rights work includes exposing covert US military involvement in the Mamasapano massacre in 2015 and how the forced evacuation and government neglect of over 500,000 residents of the Islamic City of Marawi from airstrikes against alleged ISIS militants is paving the way for US and other foreign corporate investors to turn Marawi into a tourist destination and military reservation with the cooperation of the Duterte government.

In addition to pledging more aid to Duterte’s drug war and to the Philippine military, the Trump administration seeks to continue and consolidate the US military stronghold over the Philippines with Operation Pacific Eagle-Philippines, a counter-insurgency operation that allows for an unlimited budget to be set aside for the purpose of armed U.S. operations in the Southeast Asian region.

While the operation purportedly targets terrorist organizations such as ISIS and armed rebel groups such as the New People’s Army, in fact the operations go after leftist organizations and cause-oriented groups such as Suara Bangsamoro and BAYAN. The result has been the brazen extra-judicial killings of over 130 human rights defenders, including the April 29 slaying of Catholic priest Father Mark Ventura in Cagayan, who was a well-known advocate for indigenous people and against destructive mining operations.

We Stand with Jerome

BAYAN-USA joins the Filipino and American people in standing with Jerome and all human rights defenders who are up against the fascism of the US-Duterte regime. We support Jerome’s demand for an independent and impartial investigation of the CBP.

We call on the people to be vigilant and not allow the US government to cover up what it inflicted on Jerome at SFO. We hold the Trump and Duterte governments accountable for the illegal detention, torture, interrogation, and forced removal of Jerome Succor Aba from the US.

We are inspired that Jerome is far from silenced by this ordeal. As he fights for justice and accountability for what happened to him, he is even more emboldened to speak louder and fight harder for the oppressed, marginalized and forgotten in Mindanao. He continues to call for an end to martial law in Mindanao, for the return of the Marawi evacuees to their city, and for an end to US intervention in the Philippines.

We take his lead and fight alongside him.

STOP THE REPRESSION OF ACTIVISTS!

STOP US AID TO THE PHILIPPINES!

US OUT OF THE PHILIPPINES!