BAYAN USA will be joining the Malaya Movement United People’s State of the Nation Address (SONA) Actions across the U.S. making the call that originated from the Philippines an international response! We call on all people fighting against the violent macho- fascist US-Duterte regime to join us in standing up for human rights, national sovereignty, and defending democracy in the United People’s SONA!

The US-Duterte regime has angered more and more people as he continues his tyranny, violent fascism, and rise towards a full fledged dictatorship!
There are more than 20,000 killings under his Deadly Drug War. Stop the Killings NOW!
More than 400,000 displaced people especially Lumad under Martial Law in Mindanao. END Martial Law in Mindanao NOW!
Duterte’s push for CHA-CHA or the attempt to change the Philippine Constitution will only extend his Presidential term along with further liberalizing the economy and allowing more foreign ownership. We must FIGHT for a truly Independent Philippines free from U.S. imperialism and China’s economic and military intervention and occupation of Philippine Islands! National Industrialization for a self-sustaining Philippines and jobs for Filipinos!
END CONTRACTUALIZATION! Demand better working conditions, benefits, and wages for all workers!

DERAIL the TRAIN Law that has only increased the taxes on the poor, while giving tax breaks to the top 40% of the richest population and corporations. In effect it has already burdened the majority of people due an increase in the cost of commodities.

Duterte’s MACHO-FASCISM must go! Duterte is promoting a violent and misogynistic culture that must be dismantled and destroyed. #BabaeAko

The United People’s SONA shows the growing strength of a broad people’s movement against the US-Duterte regime.  The steady decline in Duterte’s popularity also shows that the people are on the side of justice, democracy, and basic human rights. The fate of the Philippines is in the hands of the people to disrupt Duterte’s path of tyranny and fascism, and to build a better society for the benefit of the majority of the population. 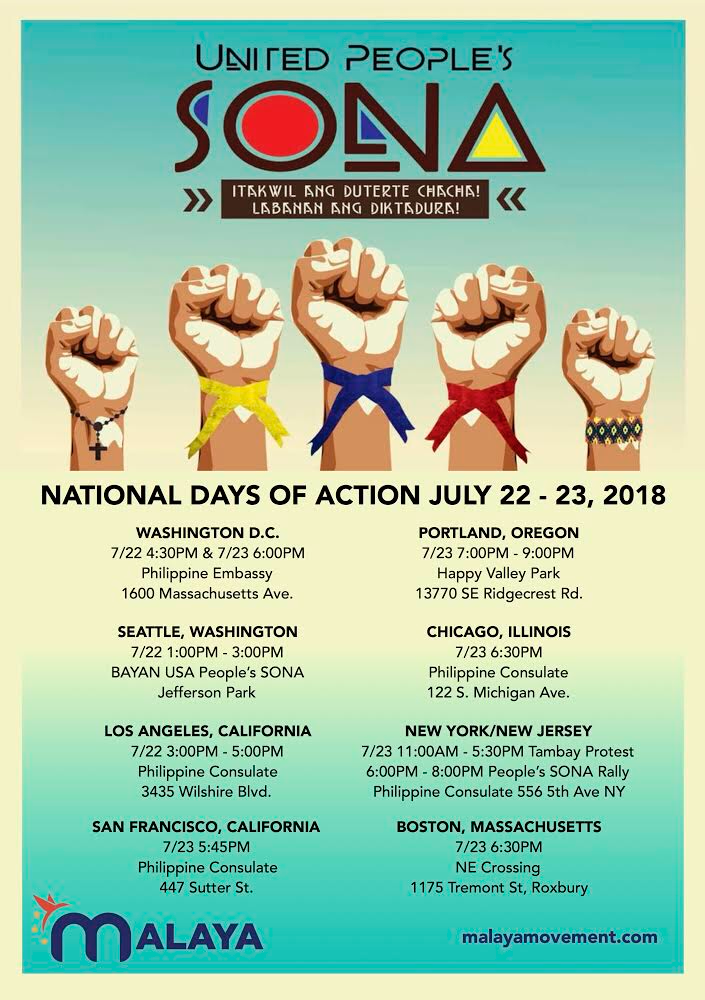