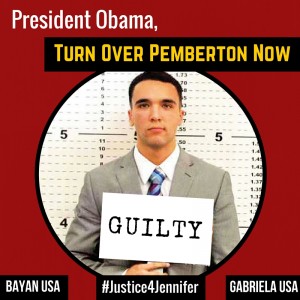 December 4-6 Petition-signing Blitz- Click link to sign HERE
On October 11, 2014, Filipina transgender woman Jennifer Laude was brutally murdered in Ologapo, Philippines. The long-awaited verdict of US Marine Joseph Scott Pemberton for the murder of Jennifer Laude was released on December 1st in the Philippines. He was found guilty of homicide, considered a lesser offense than murder, and sentenced to serve 6-12 years in prison and ordered to pay the Laude family $95,000. However, Julia Cabillan, Jennifer’s mother states:

“No amount of money could pay for the years I spent raising my child.  What they did to my child was gruesome. Just because we are poor doesn’t mean we can’t fight for justice.”

BAYAN USA and GABRIELA USA are calling attention to Jennifer Laude’s murder and demand both the U.S. & Philippine governments to hold U.S. Marine PFC Joseph Scott Pemberton accountable for Jennifer Laude’s murder. Rather than turning over Pemberton to Philippine authorities as stipulated in his court-ordered sentence, the U.S. refused to give up custody of the convicted Marine–in blatant disregard for Philippine sovereignty.

The U.S. and Philippines have had a long history of unequal relations between both countries. Until agreements like VFA and EDCA are eradicated, we expect that violence and injustices committed against Filipino women and children will happen repeatedly due to unequal relations between the U.S. and the Philippines. We demand that President Obama stop violating Philippine sovereignty and order Pemberton to be turned over to Philippine authorities immediately.
Starting today, December 4th through Sunday, December 6th, we are calling for a 2-day Petition-signing Blitz, with a goal of at least 1,000 signatures by December 6th. Sunday will mark the fifth day since the court ruling, which is the deadline for the U.S. and Philippine authorities to finalize where Pemberton will be. Please sign and urge others to sign as well, as we demand true justice for Jennifer and uphold Philippine national sovereignty, and make our call loud and clear for the U.S. to turn over Pemberton!

Change your Profile picture “Justice for Jennifer Laude!” on Facebook and add the petition link! 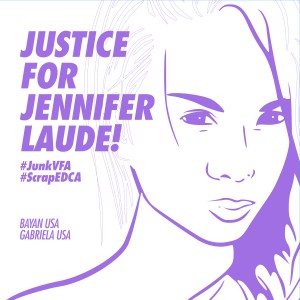