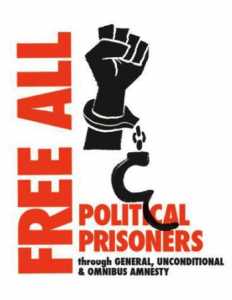 ng for the poor is NOT a crime!

Join the call to action to #LoveOurFreedomFighters and support political prisoners in the Philippines!

Background: From the 15th-19th of January this year, 491 political prisoners in the Philippines conducted a hunger strike to call attention to their unjust imprisonment and the state-sponsored repression of activists under the watch of President B.S. Aquino.  While the hunger strike was a constitutionally-protected act by the prisoners, the state retaliated by blocking visitors to ALL prisoners– even doctors and lawyers were prevented from entering.  At the Special Intensive Care Area 1 (SICA) of the Metro Manila District Jail at Camp Bagong Diwa, jail warden Michelle Ng-Bonto blamed her illegal and repressive actions on the political prisoners–and she provoked members of the notorious Sputnik gang to harass and threaten the political prisoners.

As a result, the health and lives of political prisoners are currently in danger, and they are asking for international support to end the threats and repression.

What you can do:

Demanding fair wages for workers…food and shelter for victims of typhoons…land for farmers and indigenous people…and peace and sovereignty instead of militarization is NOT a crime! Thank you for joining BAYAN-USA’s call to action to support Filipino teachers, women, farmers, youth, journalists, workers and other Freedom Fighters imprisoned by Aquino.