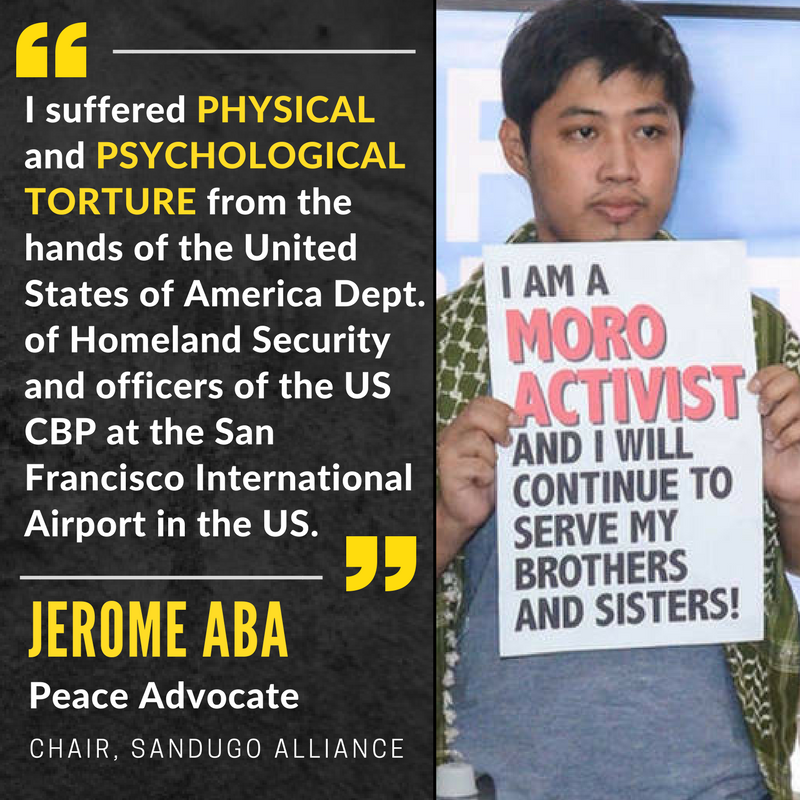 BAYAN-USA joins Jerome Aba’s demand for an investigation into his detainment and torture at the hands of the U.S. Customs and Border Protection (CBP) Agents last April 17-19 at the San Francisco International Airport. The U.S. Department of Homeland Security (DHS) and its agents in the CBP must be held accountable for what they did to Jerome. Moreover, Jerome’s experience raises serious questions about the treatment of all detainees while in CBP custody and fits the despicable trend of the use of migration policies and border enforcement tactics to repress activism and terrorize the masses. We must continue to expose what happened to Jerome on U.S. soil and reveal the inconsistent and false comments and statements made by the DHS and CBP.

Aba was detained for 28 hours, held incommunicado and treated as an “enemy combatant” by CBP officers who repeatedly questioned him about his political activity and human rights advocacy all while denying Aba access to a lawyer. These are facts that even the CBP eventually has admitted. However, at the time Jerome was detained, the CBP commented to media that his detainment and removal back to the Philippines was due to an “unspecified problem with his visa — which is relatively common — and said that foreign nationals do not typically have access to an attorney until after they’ve been allowed entry.” They also stated that “U.S. Customs and Border Protection does not consider country of origin or human rights activism to be determining factors for admissibility.”

After Aba held a press conference in the Philippines and gave his own account of the psychological and physical torture that happened to him behind closed doors, the CBP continued to repeat its canned line about treating all travelers with “dignity and respect” and deny any allegations of torture or religious discrimination. It was only after the San Francisco Board of Supervisors unanimously passed a resolution to investigate the treatment of Jerome and condemning the inhumane treatment of detainees at SFO, that the CBP changed its public story and cited “Aba’s connection to individuals within terrorist networks” as its reason for detaining and denying entry to Aba.

BAYAN-USA condemns the CBP’s cover-up and its malicious accusations about Aba.  Not only does this behavior match the agency’s history of abusing people in its custody and attempting to cover it up, but it also demonstrates the collusion between the US and Duterte regime in criminalizing human rights defenders.

There is absolutely no doubt that Jerome Succor Aba was targeted because he is a Moro-Muslim activist from Mindanao, Philippines. Had Aba been allowed to take part in the nationwide Stop the Killings Speaking Tour in the U.S., his public testimony would have exposed the human rights violations of the U.S. and Philippine governments working hand-in-hand in the Philippines, especially under the current political state of martial law in Mindanao.  Obviously, the CBP is trying to cover up what happened to Jerome in an attempt to silence Jerome and the movement for genuine, lasting peace and justice in the Philippines.

BAYAN-USA denounces this dangerous increase in fascist tactics used by both Presidents Trump and Duterte to suppress opposition.  BAYAN-USA calls on all communities fighting for human rights to stand with Jerome Aba’s fight for justice.  We must rise together to demand accountability from the DHS and CBP through an independent investigation into Jerome’s treatment as well as the treatment of all detainees in the custody of the DHS and their agents.  We must defend our right to organize against these fascist Presidents by building a broad anti-imperialist movement that will shake the foundations of imperialism and take back the rights that belong to the people.