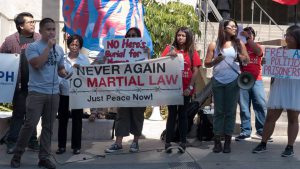 Photo Caption (Above):: Nap Pempeña of Anakbayan USA honors the martyrs and victims of Martial Law and calls on youth to continue the fight for a just and lasting peace in  the Philippines.

LOS ANGELES, CA – On September 21, Filipino American human rights advocates and American supporters rallied in front of the Philippine Consulate in Los Angeles to mark the 44th anniversary of the declaration of Martial Law by former Philippine President Ferdinand Marcos and called on the Duterte administration to denounce the crimes of the Marcos’ dictatorship.

Led by BAYAN USA and the International Coalition for Human Rights in the Philippines (ICHRP) Southern California Network, the participants called for justice for victims of the Marcos dictatorship and condemn the continuing human rights violations in the Philippines.

“Extrajudicial killings and arrests were an abominable hallmark of Marcos’ 21 year rule, which was propped up by the U.S. government,” Nikole Cababa, Deputy Secretary General of Bayan USA. “In order to set himself apart from all previous puppet presidents, Duterte should immediately put a stop to all extrajudicial killings in the country and end the illegal arrests of activists under the Philippine military’s U.S.-directed counterinsurgency plan Oplan Bayanihan.” 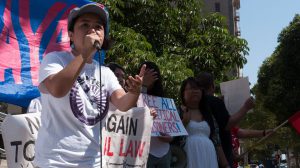 The groups strongly oppose the burial of Marcos in the Libingan ng mga Bayani (Heroes’ Cemetery). “We resist the erasure of our people’s history. When we bury a convicted plunderer who was dishonorably dismissed by its own people and by its own military, what message does it send to the youth and to the people? It means that the most corrupt and despotic tyrants in our country can be hailed as heroes; that the burial of Marcos in the National Heroes’ Cemetery signals the burial of justice for the victims of Martial Law.” said Nap Pempeña, Vice Chairperson of the nationwide youth group Anakbayan-USA.

The groups also pressed for the Duterte administration to continue making progress in the peace talks between the Government of the Republic of the Philippines (GRP) and the National Democratic Front of the Philippines (NDFP). “Duterte can make unprecedented and lasting changes that will benefit the Filipino people for generations to come if he continues to sincerely pursue peace negotiations with the NDFP,” said Joy Prim of the International Coalition for Human Rights in the Philippines Southern California Network. 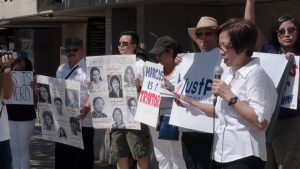 Photo Caption (Right):  Pastor Ruth of the United Church of Christ in the Philippines and member of the National Ecumenical Forum for Filipino Concerns (NEFFCON) Southern California highlights the poor who suffered under martial law.

“He must follow through on the GRP’s commitment during the recent Oslo peace talks to declare amnesty and release the 525 political prisoners that remain unjustly detained in prisons across the country. While we support Duterte in the process of the peace talks, we continue to be alarmed by the human rights situation in the country, the killings, and the further arrests of political prisoners without any cause.” Since August, five peasant leaders have been assassinated and more activists have been arrested despite the existence of unilateral ceasefires in the country’s 47 year civil war.

Cababa added, “For the peace talks to succeed, Duterte must follow through on his recent statements asserting an independent foreign policy not dominated by U.S. interests. His words must be proven in action by terminating all unequal military and economic agreements with the United States, such as the Visiting Forces Agreement (VFA) and the Enhanced Defense Cooperation Agreement (EDCA). Only then will the Philippines be free to enact social and economic reforms that can create liveable jobs for Filipinos through land reform and building national industries.” 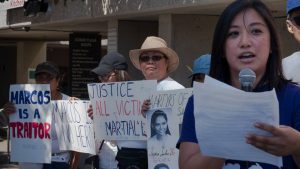 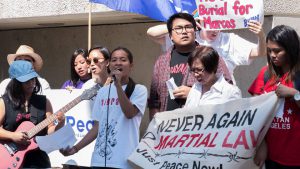 Photo Caption (Above): Local artists Menchie Caliboso of Habi Arts and Hiyasmin Saturay of Migrante Southern California perform “Bayan Ko” in honor of the victims and martyrs of martial law. 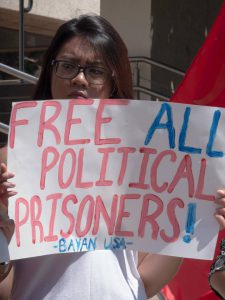 Photo Caption (Above):  Lealani Manuta of Anakbayan Long Beach joined the protest to urge President Duterte to keep his commitment to advancing the peace talks in the Philippines by granting general amnesty to all political prisoners in the Philippines. 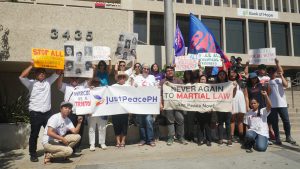