BAYAN USA, a progressive anti-imperialist alliance made up of over 20 Filipino mass organizations from all over the US, are being represented today by two organizations–one from the youth and student sector, Anakbayan East Bay in Ohlone lands (also known as San Francisco Bay Area), California, and the other from the New York Committee for Human Rights in the Philippines (NYCHRP) in Lenape lands also known as NYC, to stand in solidarity with the deepest indignation with Standing Rock, and the Sioux Dakota and Lakota indigenous peoples in their fight against the Dakota Access Pipeline. We are here to carry messages of love, hope, solidarity, and resistance from our homeland, the Philippines, which is comprised of dozens of distinct ethnolinguistic tribes and national minorities. We stand with you—the water and land protectors of North Dakota, as the U.S. government continues to prioritize corporate interests over your autonomy, self-determination and ancestral relationship to the land and water. We stand with you in resistance against the U.S. military state and its violent dispersal of your people, trumped-up charges, and human rights abuses, which have not been covered by mainstream, corporate media. We stand in solidarity, as police deploy military-grade equipment, including armored vehicles, surveillance helicopters, planes, drones, and attack dogs—knowing that this state repression is endemic to U.S. imperialism and the suppression of resistance all over the world. We saw this global complex come full circle at Urban Shield held in the Bay Area—a regional, national and global weapons expo and SWAT training that brought together law enforcement agencies and first responders in order for them to learn how to better repress, criminalize, and militarize black and brown communities. We can see these tactics here on Dakota land and in our homeland, the Philippines. Similar to the 280 indigenous tribes that have united here at Standing Rock, SANDUGO, an alliance of national minority groups in the Philippines held a protest at the U.S. Embassy in Manila, the capital of the Philippines, against U.S. imperialist plunder and militarization and are fighting to defend their ancestral lands and right to self-determination. Just yesterday, they were violently dispersed with water cannons, teargas, and over 50 people were injured when a police van was used as a weapon to run over people repeatedly. The brute force from the Philippine military and police to protect the U.S. embassy is in line with maintaining US imperialism over the rights and welfare of the Filipino people. From our homeland in the Philippines to the militarization of communities by Urban Shield, to the killing of Berta Caceres in Honduras, and to defending indigenous rights in Standing Rock, we denounce the criminalization of resistance and stand with the protectors of land, water, and human dignity all over the world. Next we’d like to read a message from our indigenous comrades from the International Indigenous People’s Movement for Self-Determination & Liberation in the Philippines. 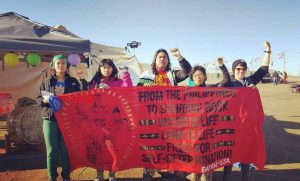 Protect Our Waters and Territories, No to Dakota Access Pipeline!