From Fagen to Ferguson:
We Stand with Our Black Brothers & Sisters in Resistance– BAYAN USA 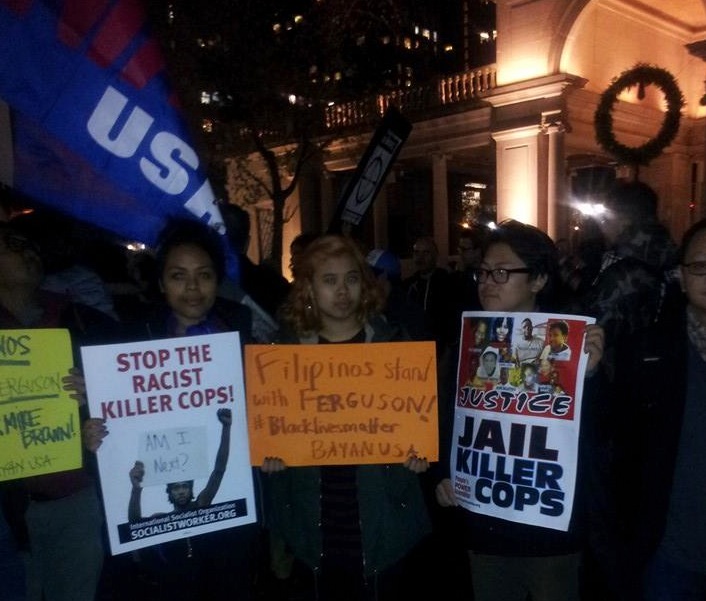 Through its non-indictment of Ferguson police officer Darren Wilson, the US judicial system has once again confirmed its true character — that, like the police, it exists to protect and serve the ruling class and maintain white supremacy. The grand jury decision to let Michael Brown’s killer go not only re-victimizes Brown and his family, but sends a clear message to African-Americans that the state is continuing to wage a centuries-old, systematic and calculated war on Black people–from slavery to Jim Crow to chronic poverty to COINTELPRO to the prison-industrial complex.  Its goal is complete subjugation of African Americans, to facilitate their exploitation by US imperialism.

BAYAN USA stands firmly with Ferguson and with our Black brothers and sisters in the US. We reiterate our recognition of the right of African-Americans to self-determination and for the need for Black leadership in the fight against white supremacy and racism.

We also reiterate our support to Black organizers calling for the formation of self-defense networks. Beginning with the forcible and violent extraction of Africans from their homeland to labor on tobacco and cotton plantations in the US as slaves, upon whose backs US monopoly capitalism was built, history has always demonstrated the need for Black armed resistance as a natural form of self-defense from white supremacist violence and state repression. Historical examples of this include the Black Panther Party and later the underground Black Liberation Army, both of which formed out of the civil rights era conditions of chronic poverty and total Black disenfranchisement alongside white supremacist violence, lynchings, and state-orchestrated assassinations and incarcerations targeting Black community leaders.

African-American and Filipino solidarity in armed resistance to the US ruling class and its military force can be traced as early as 1899, during the Philippine-American War, when an African-American soldier by the name of David Fagen defected to the side of the Philippine Revolutionary Army and eventually became a captain. As the first US war of aggression and for colonization overseas, the Philippine-American War was the opening salvo for US imperialism onto the global stage at the turn of the 20th century.

Fagen, a Buffalo Soldier with the 24th Infantry Division of the US Army at the time, saw how US soldiers calling Filipinos “niggers” was wrought with the same white supremacist hate and chauvinism towards African-Americans, and eventually realized he was fighting with the wrong army. After defecting, a handful of African-American soldiers in Fagen’s unit followed suit.

Fagen’s example is a hallmark inspiration for all us outraged over the grand jury decision to let Darren Wilson walk free and to forge greater solidarity as we escalate our multi-national and multi-racial peoples resistance against white supremacist violence and police repression, and ultimately against US imperialism.

Justice for Mike Brown will not be won in the confines of the US judicial system, nor within the Obama administration. It is up to us, the people ourselves, to take justice for Mike Brown and all whose lives have been lost to police violence and militarism by any means necessary.

Stop the Extrajudicial Killings of Black People!
Justice for Mike Brown and all lives lost to state violence!
Down with White Supremacy! Down with Monopoly Capitalism!
Long live the Right to Self-Determination!
Long live International Solidarity!

BAYAN-USA is an alliance of 18 progressive Filipino organizations in the U.S. representing youth, students, women, workers, artists, and human rights advocates. As the oldest and largest overseas chapter of Bagong Alyansang Makabayan (BAYAN-Philippines), BAYAN-USA serves as an information bureau for the national democratic movement of the Philippines and as a center for educating, organizing, and mobilizing anti-imperialist Filipinos in the U.S. For more information, visit www.bayanusa.org.