On International Human Rights Day, BAYAN USA joins the millions of people across the globe in fighting for human rights! We must always remember that in the midst of great political darkness in the United States and in the Philippines, it is the power of the people who stand up against the tyranny and injustice that holds the light directed towards genuine change. We must speak out for those who can no longer speak, because their voices were taken from them by state forces, or their civil rights snatched away from them because they stand behind bars.

Philippine State Impunity Continues
President Duterte is beginning to show his true colors as his actions speak much louder than words. President Duterte continues to deny the freedom of the more than 400 political prisoners, even when he has stated numerous times that he will free them. The Armed Forces of the Philippines continue to harass, detain, occupy schools, and violently disperse protests when he once welcomed activists into Malacanang. And the number of killings related to his “War on Drugs” continues to grow with impunity. The secret burial of former Dictator Ferdinand Marcos was an added slap in the face to the Filipino people.

Duterte won his Presidency by winning over the populace as a different type of politician. BAYAN USA supported the appointment of known progressives into his cabinet and had hope in his administration with the immediate resumption of the peace talks with the National Democratic Front of the Philippines (NDFP). However, the mounting human rights violations under Duterte’s watch must be stopped. President Duterte has the responsibility to serve the people of the Philippines. He must listen to the people and carry out their will, not “serve the interests of any one person or any group or any one class” as he mentioned in his inauguration speech. Not the Marcos’, or big business, or military interests, or US influence. 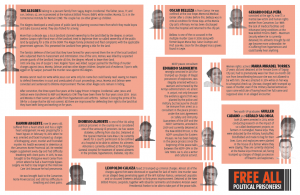 Over 150 political prisoners in the Philippines began a hunger strike on International Solidarity with Political Prisoners Day on Dec. 3rd and ended on the 8th day to press President Duterte to free all political prisoners and to shed more light on their stories and fight for freedom! He had promised to release the elderly and sick; however it was too late for Bernabe Ocasla, who died of cardiac arrest on November 28th. The continued detention of the political prisoners makes the Philippines government in violation of the agreements signed during peace negotiations with the NDFP, since both parties had committed to the Joint Agreement on Safety and Immunity Guarantees (JASIG) and the Comprehensive Agreement on Human Rights and International Humanitarian Law (CAHRIHL).

Join BAYAN USA events across the nation to stand up for human rights and to promote genuine just and lasting peace in the Philippines! Sign the online Petition! We are also collecting letters of support to political prisoners, please see the template and directions on our BAYAN USA FB page.

HUMAN RIGHTS AND JUSTICE FOR ALL! 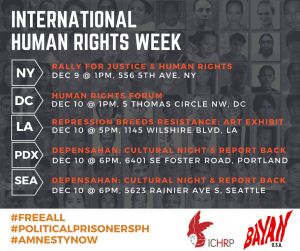