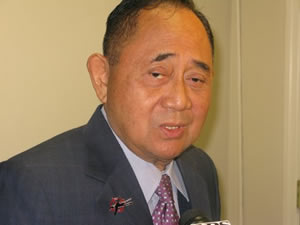 SAN FRANCISCO–President Gloria Macapagal Arroyo’s bid to stay in power was dealt another blow yesterday, as long-time Arroyo ally and former Speaker of the House Jose De Venecia Jr. submitted his formal written endorsement of the most recent impeachment complaint against President Arroyo. Congressman De Venecia officially signed his endorsement of the impeachment complaint at the office of the Philippine Consulate in San Francisco at approximately 3 PM Pacific Standard Time on November 3, 2008. Representatives of BAYAN USA, GABRIELA USA, GMA Watch, the National Alliance for Filipino Concerns (NAFCON), and the Presbyterian Church USA packed the office to support Congressman De Venecia’s historic signing of the impeachment complaint, which charges President Arroyo with betrayal of public trust, culpable violation of the Constitution, bribery, and graft and corruption.

“I have come to believe this impeachment complaint is invested with a purpose that commands a higher sense of duty to country and people. For me not to endorse such grave allegations would in itself constitute a crime against the Filipino people,” said Congressman De Venecia. “We must restore to public office the virtues of openness, accountability, integrity and good governance—all of which the Arroyo Administration has cast aside,” he continued.

During the presentation, representatives of U.S.-based organizations voiced their condemnation of Arroyo’s dismal human rights record and blatant acts of corruption. “BAYAN USA supports the Filipino people’s demand for justice and accountability embodied in this impeachment complaint, but we will not stop there,” said Rhonda Ramiro of BAYAN USA. “We vow to continue using all the tools at our disposal, including protesting in the streets, until we achieve justice for the more than 900 victims of extrajudicial killings perpetrated under Arroyo’s command and the tens of millions of Filipinos who are victims of Arroyo’s corruption and abusive economic and military policies.”

Terry Valen of the National Alliance for Filipino Concerns voiced his support for the impeachment complaint, citing the hypocrisy of Arroyo’s corruption and neglect of overseas Filipino workers. “Filipinos leave the country at the rate of 3,000 people each day because they lack any means to survive in the Philippines. Instead of enacting policies which allow our kababayan to have decent jobs that can support their families, Arroyo is guilty of corruption and bribery which deepen poverty and drive people to become economic refugees who have to migrate abroad,” said Valen.

The impeachment complaint was filed on behalf of the Filipino people by 17 complainants, including the mothers of disappeared activists, witnesses to Arroyo’s acts of bribery, victims of human rights violations, and elected officials. Arroyo’s approval rating has plummeted to a record low over the past year, as corruption schemes involving the Arroyo family have been revealed, including the costly ZTE-National Broadband Network deal and millions in cash bribes paid to politicians in the Philippine Congress to win loyalty to the Arroyo clique and diffuse growing opposition movements. Since Arroyo assumed power in 2001, the Armed Forces of the Philippines have been implicated in the murders of over 900 activists and the disappearances of more than 200, in what is broadly believed to be a government-sanctioned campaign to silence its critics.

“It is ironic that as many Americans go to the polls today to elect a new president, the Filipino people are exercising their right to reject the criminal President Arroyo,” commented Ramiro. “We hope that the newly elected president of the U.S. will support the Filipino people’s call for justice and self-determination, by withholding all aid from the corrupt Arroyo administration, withdrawing U.S. military personnel from the Philippines, and abrogating agreements between the two nations like the Visiting Forces Agreement which foster human rights abuses in the first place.”

The meeting ended with Congressman De Venecia receiving a “Stop the Killings” pin from BAYAN USA, a symbol of support for the campaign to end human rights violations in the Philippines.