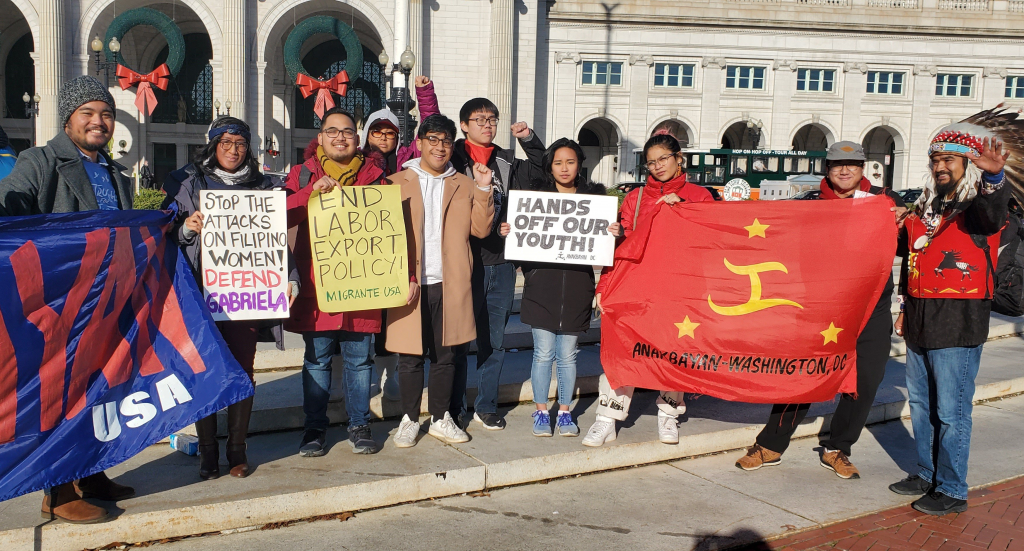 Washington D.C. – BAYAN USA DC-MD-VA commemoration of the 71st Human Rights Day, alongside allies in the People over Profit, Planet Over Profit Action.

The well-known resilience of the Filipino people is not inherent but derived from years of resistance against oppression.  Just as Filipinos fought the US-Marcos regime, the Filipino people continue to fight back against the U.S.-Duterte regime. As basic human rights are violated and lives are stolen, the imperative to oust this regime is urgent. But beyond mere survival, Filipinos have always fought for liberation. We must intensify and elevate this revolutionary legacy to smash the power of the oligarchs and build a new government that reflects the aspirations of the people.

Today, on International Human Rights Day, let us all honor the contributions of those who have fought to defend the basic human rights of peasants, workers, women and children, and have been abruptly taken from this world at the hands of the state. According to Philippine human rights organization Karapatan, more than 293 people have been targeted and extrajudicially killed by the government forces and this will only increase with his counterinsurgency program Oplan Kapanatagan intensified through Executive Order 70. In addition, there are nearly 30,000 people killed in the “drug war.” 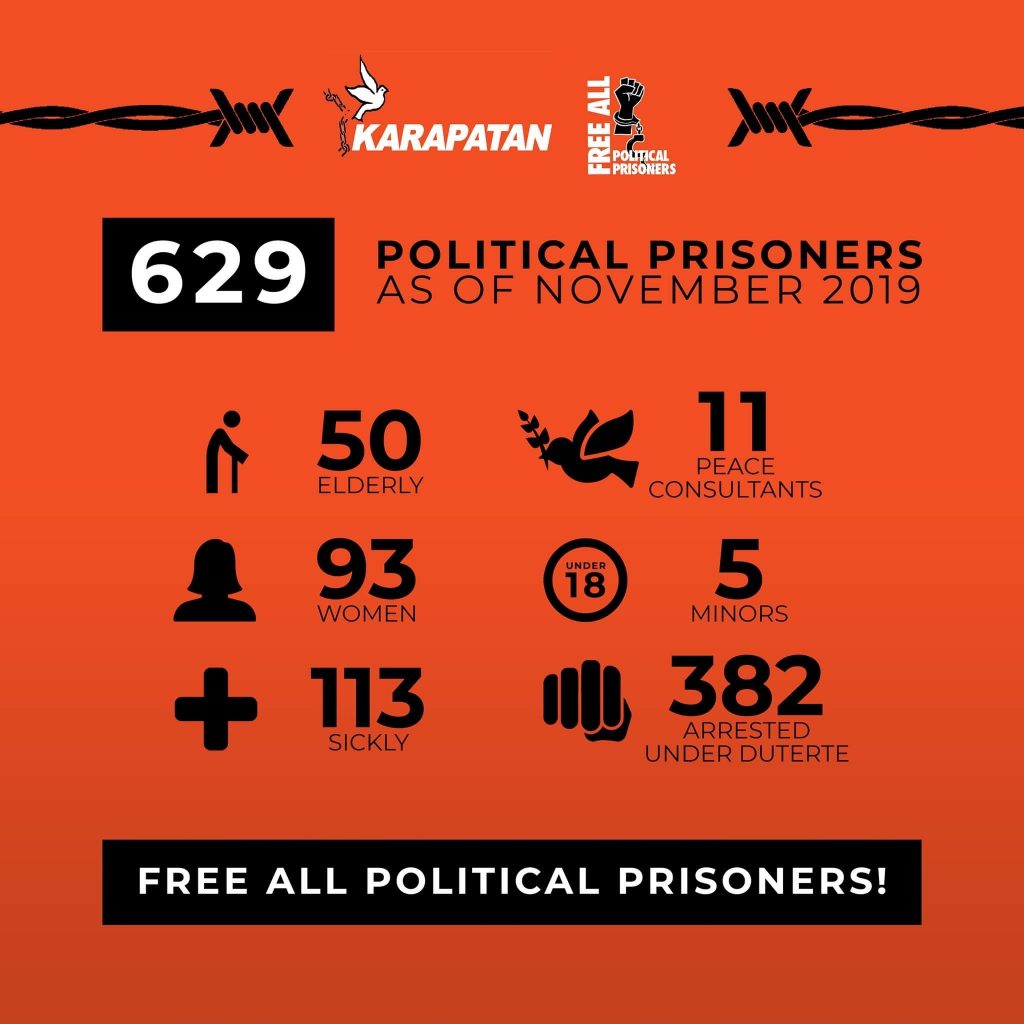 Karapatan also counts more than 629 political prisoners, with 382 of them arrested under Duterte’s regime. Let us also continue to demand for their immediate release, especially because their alleged charges are false and lack any evidence.  We call for the release of peace advocates and peace negotiators in the Philippines, namely, Rey Claro Casambre, Vic Ladlad, Renante Gamara, and among others who were illegally arrested, in violation of the Joint Agreement on Safety and Immunity Guarantees (JASIG).

Though the peace talks between the Government Republic of the Philippines(GRP) and the National Democratic Front of the Philippines(NDFP) was halted soon after Duterte declared Martial Law in Mindanao, we must continue to push to resume negotiations to address the root causes of the armed conflict which would ultimately address the massive poverty, landlessness, and need for self-sustainability of the Philippines and the Filipino people. There is not only hope for a better Philippines but a detailed roadmap, which can be seen if one just takes a look at the full comprehensive program outlined by the Comprehensive Agreement on Social and Economic Reforms- CASER.

This is what the Philippines could be. This is what the National Democratic movement is fighting for. As Duterte continues down the violent fascist path through the drug war and Oplan Kapanatagan, he is simultaneously digging his own grave. As the death-toll rises, more and more people who have never thought of themselves as activists are drawn to join a movement that seeks to dismantle the current state of the Philippines and build a new state that does not utilize repression to maintain its power. They want to be part of something much larger than themselves. Today, on International Human Rights Day, let us not only remember those who have been martyred by the political turmoil in the Philippines, let us continue what they were fighting for and take the necessary steps to grow the movement for National Democracy – national industrialization, genuine agrarian reform – a self-sufficient sovereign Philippines!

Brandon Lee is a survivor of an attempted killing by the Philippine State because of his human rights work in the Cordilleras; he is resilient and will continue his path towards recovery!  Let us continue supporting him and his family by donating HERE

Stop the Killings! Stop the Attacks!

BAYAN-USA is an alliance of 29 progressive Filipino organizations in the U.S. representing students, scholars, women, workers, artists, and youth. As the first and largest international chapter of Bagong Alyansang Makabayan (BAYAN-Philippines), BAYAN-USA serves as an information bureau for the national democratic movement of the Philippines and as a center for educating, organizing, and mobilizing anti-imperialist and progressive Filipinos in the U.S.  For more information, visit www.bayanusa.org.