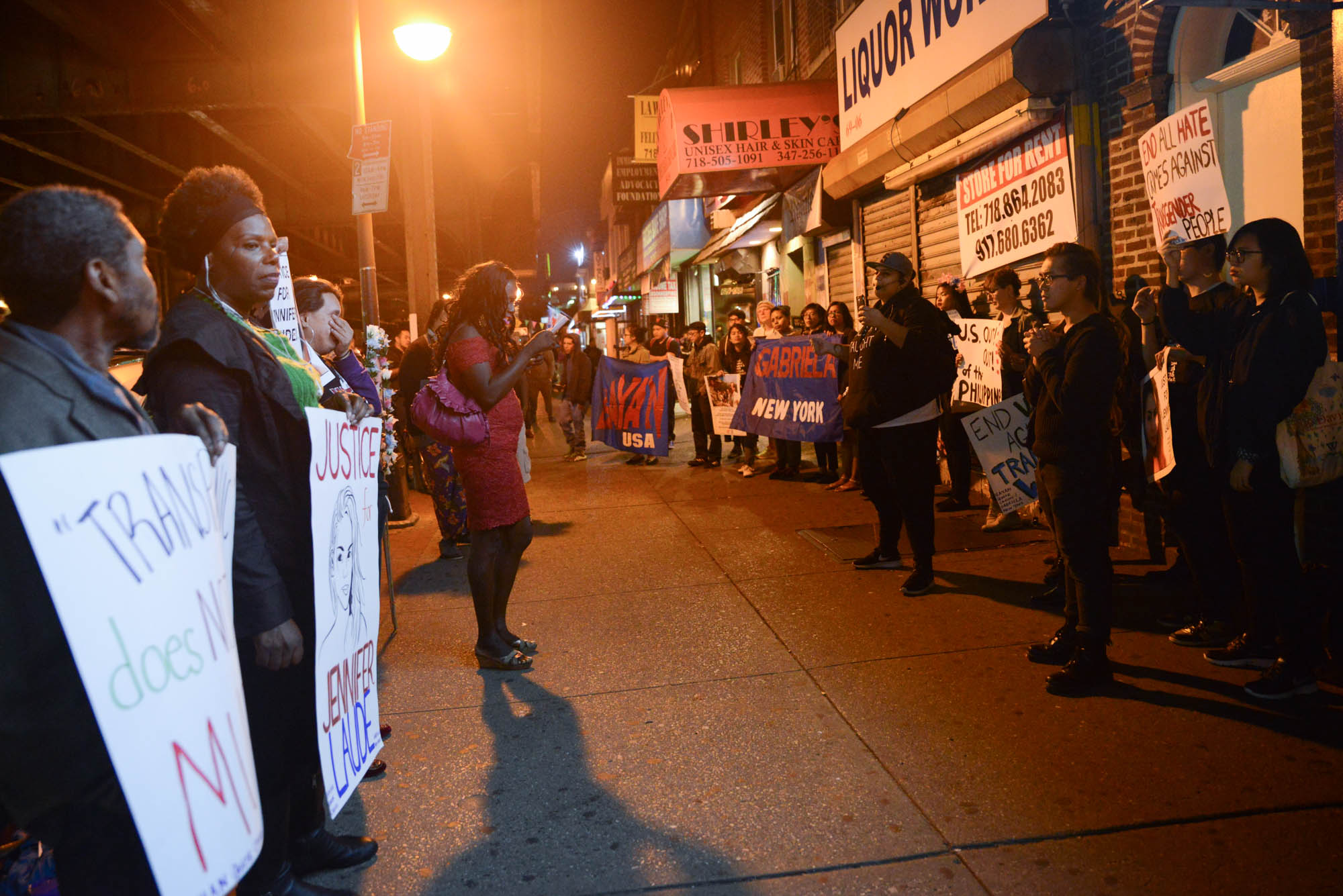 New York – On Sunday evening, October 11, 2015, BAYAN USA North East Queer Caucus with GABRIELA New York and TransJustice of the Audre Lorde Project led a vigil and march of over 60 activists and community members along Roosevelt Avenue in Woodside, Queens, to honor the life of Jennifer Laude, a Filipina woman, brutally killed one year ago by U.S. Marine Scott Pemberton and to demand immediate justice for her case, while calling for an end to all forms of violence against women and LGBTQIGNC people of color.

BAYAN USA North East Queer Caucus called for the swift conviction of U.S. Marine Private First Class Joseph Scott Pemberton and his immediate transfer from U.S. to Philippine custody. Pemberton was last seen with Jennifer Laude in Olongapo City before her broken body was found in a hotel room. In Philippine court, Pemberton denied killing Jennifer, but admitted to strangling her after discovering she “was a man” and said he feared he had been “raped.” Activists and community members at the vigil recognized Jennifer’s murder as a hate crime and expressed outrage at the prosecution’s “trans panic defense” used to justify Pemberton’s transphobic aggression.

Although there was a recent victory with the passage of AB 2501, California’s state ban on the use of “trans panic” and “gay panic” defenses in court, transgender and gender non-conforming people are being murdered at a historic rate in the U.S. Sheneeneh Maria Smith of TransJustice commemorated transgender people of color, who were murdered for their gender expression, by reading their names out loud. Chelle Lhuillier of TransPinay called on those at the vigil to remember the 15 transgender people murdered in 2015 alone. “Our fight for justice doesn’t end on the street. We have to continue fighting for our rights, we have to continue demanding justice, and to continue fighting for higher visibility for greater acceptance in society. We have to fight against violence and discrimination, particularly around gender,” stated Lhuillier. 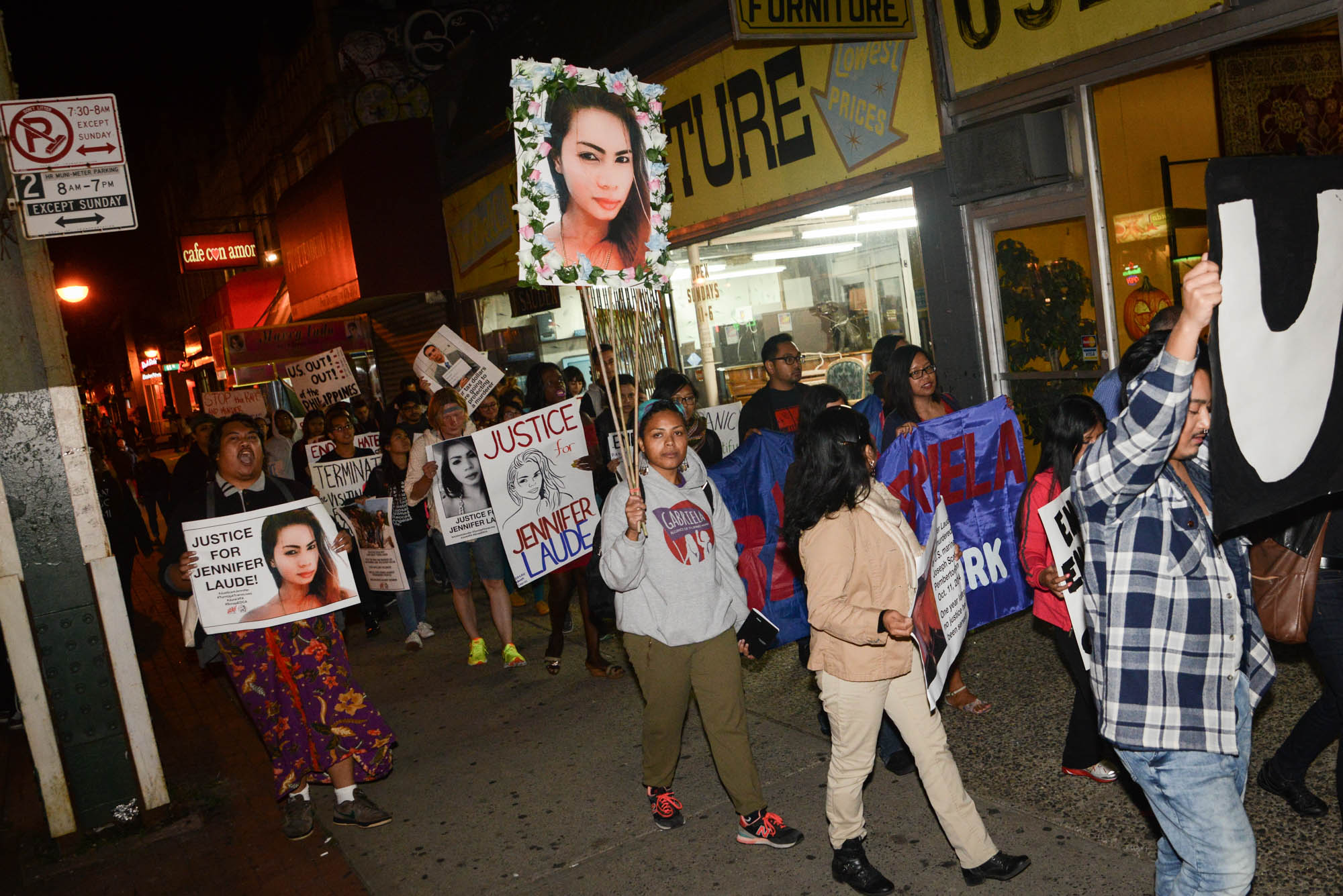 BAYAN USA North East Queer Caucus also called for the abolition of the Visiting Forces Agreement (VFA) and Enhanced Defense Cooperation Agreement (EDCA), which allow U.S. military presence in the Philippines despite a constitutional ban in 1991 on U.S. military bases. Pro-U.S. military treaties like the VFA and EDCA trample on Philippine sovereignty and continue to promote state-sponsored violence against the Filipino people, especially women, LGBTQIGNC people, children, and indigenous peoples. Under the VFA, Pemberton has remained under U.S. custody despite his arrest by Philippine authorities and trial in Philippine court. He was in Olongapo City after participating in military exercises that are part of the VFA.

“Pemberton got away with murder before he ever committed it. The precedents set by the VFA guarantee special treatment of U.S. military in the Philippines,” stated Cole Carothers, Chairperson of GABRIELA New York. “We saw this with Lance Corporal Daniel Smith in his 2009 conviction of rape against a Filipina woman “Nicole.” Despite overwhelming evidence of his guilt, and his actual conviction, he won freedom in a smaller appeals court and walks free on U.S. soil. Pemberton enjoys his U.S. paid salary in U.S. custody but should be held to the crimes he confessed to at the hands of the people.” 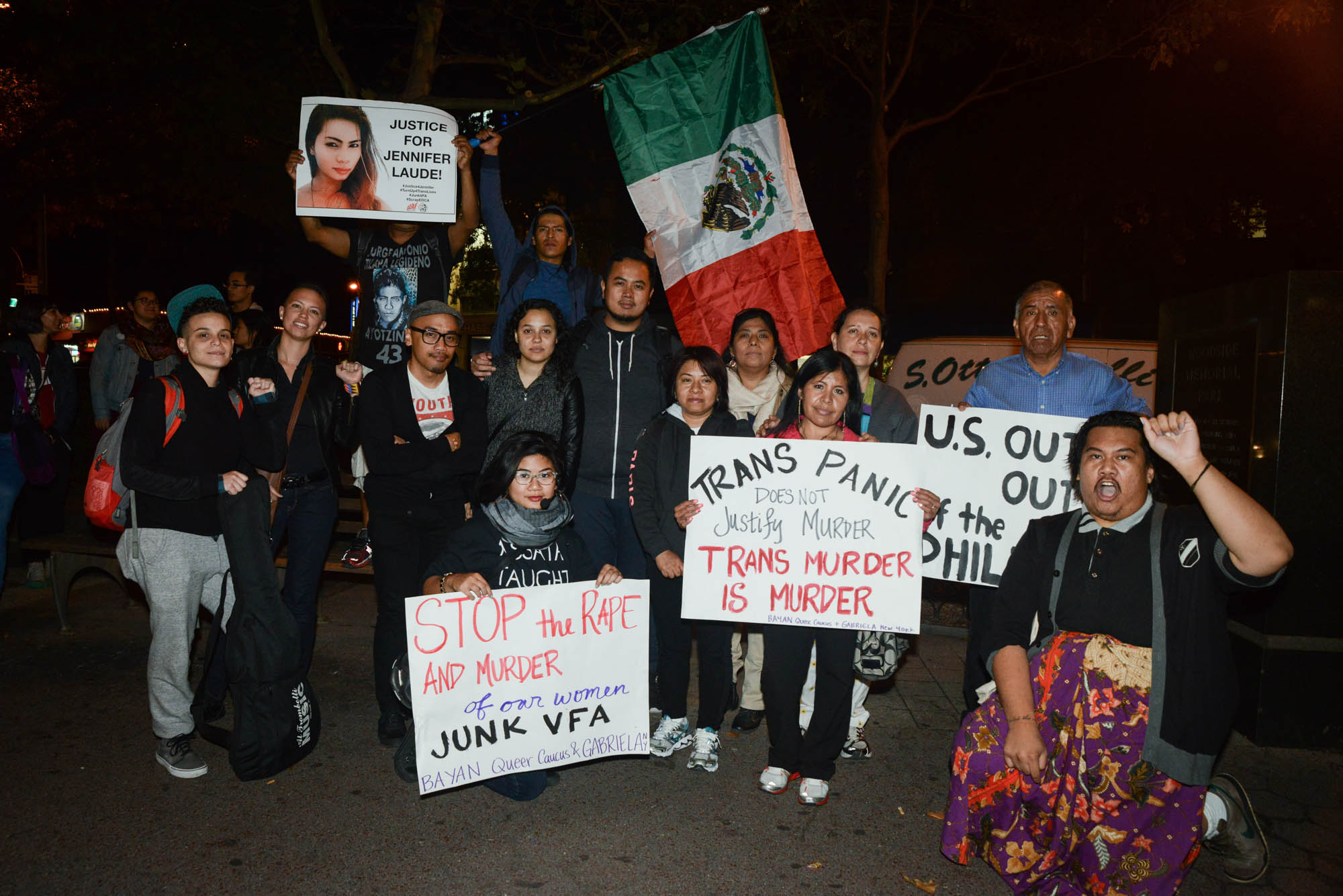 Filipinos and non-Filipinos connected militarization in U.S. and the Philippines to the systemic violence disproportionately experienced by the trans and gender non-conforming people of color community. “In 2013, the National Coalition of Anti-Violence Programs found that 72% of victims of anti-LGBTQ homicides were trans women, and 67% of them were trans women of color.

“We know in the U.S. that trans women of color especially face the violence of militarized police brutality. The U.S. military takes that same hate to the Philippines and other countries, but now with rifles, warships, and policies like the Visiting Forces Agreement that let them get away with hate,” said Gian Parel of BAYAN USA North East Queer Caucus and Anakbayan New Jersey.

Members of the Audre Lorde Project worked collaboratively with BAYAN USA North East Queer Caucus to organize a team of de-escalators to ensure a safe environment for those participating in the action. Nico Fonseca of the Audre Lorde Project said, “I’m here to support BAYAN Queer Caucus and GABRIELA to support trans and gender non-conforming folks to come out to vigils, rallies, and events like this and feel safe. I think it’s really important that while we’re organizing, we understand that our lives are at risk because of the state and intercommunal violence and internalized oppression. It’s often very dangerous for us to mobilize, to take up space in the name of Jennifer Laude, and in the name of our trans siblings who are killed and murdered. I’m grateful to support ALP’s TransJustice members, Sheneeneh Smith who spoke and to support everyone who came through so they feel safe and empowered.”

The march followed with a solemn candle-lighting and a moment of silence for Jennifer and all transgender and gender non-conforming victims of state-sanctioned violence. 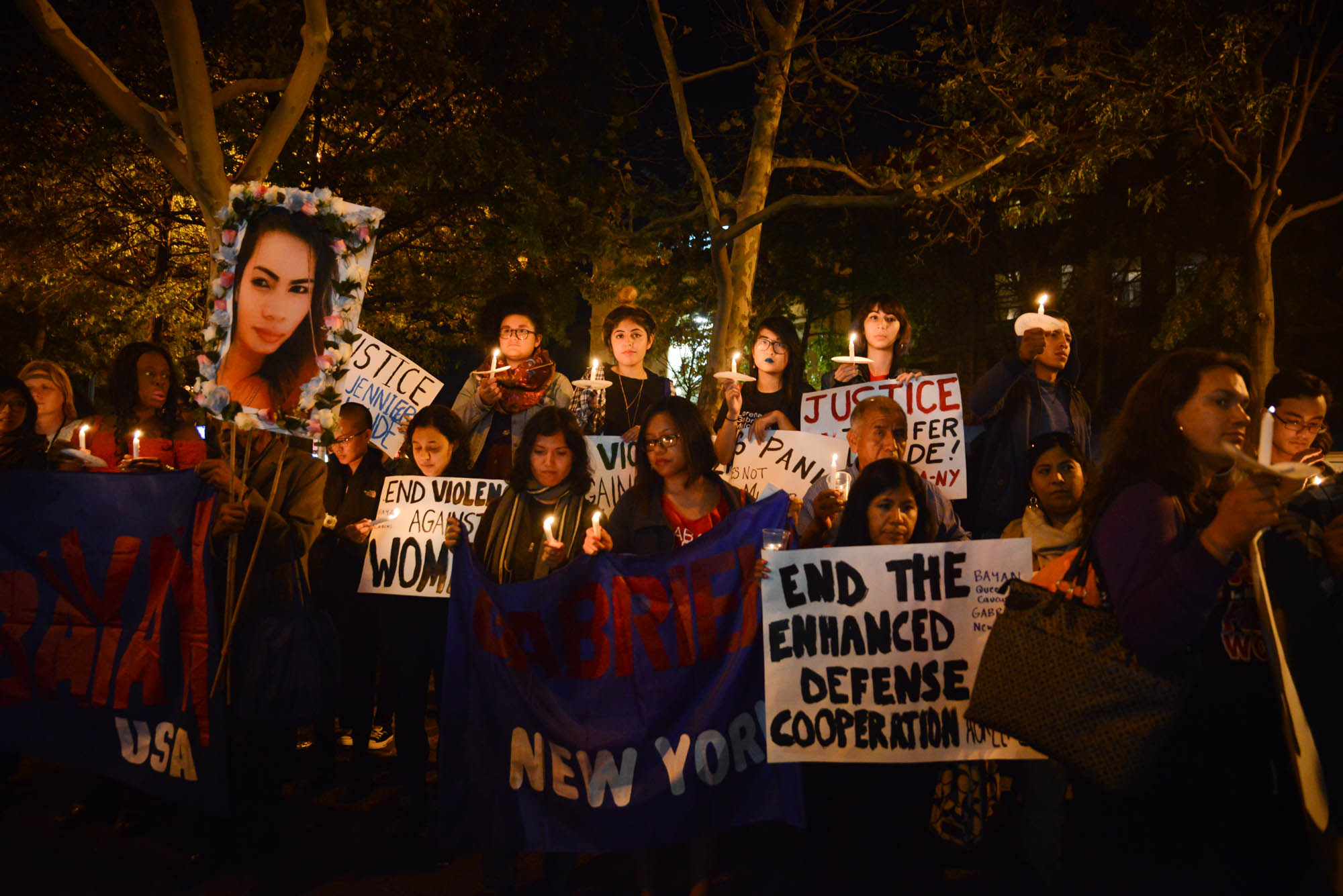 GABRIELA New York is a mass-based women’s organization serving New York City and its surrounding areas. We connect the Filipino diaspora to the women’s struggle in the Philippines. We are women of Philippine descent, including those who are migrants, immigrants and US-born. We recognize Filipino women of mixed heritage and adoptees. GABRIELA New York is a LGBTQI-(Lesbian, Gay, Bisexual, Transgender, Queer/Questioning, and Intersex) friendly organization that is inclusive of transgender people of Philippine descent.  We are a proud member of GABRIELA-USA, the first overseas chapter of GABRIELA Philippines. To learn more, please go to www.gabusa.org.  GABRIELA New York is also a member of BAYAN-USA.