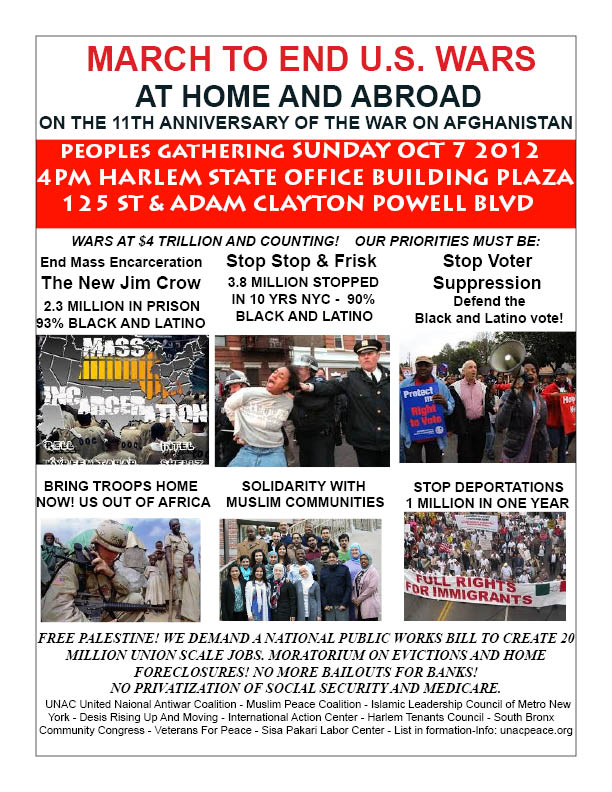 Members of the Filipino-American alliance BAYAN USA will participate in anti-war demonstrations across the US on Sunday, October 7th to call on the Obama administration to end its continuing war initiatives and drone attacks disguised as humanitarian missions in the Middle East/North Africa/South Asia region in countries such as Libya, Syria, Pakistan, and now Iran. October 7, 2012 marks the 11th anniversary of the US invasion of Afghanistan, where the Obama administration still maintains a US military presence.

BAYAN USA will also highlight the ongoing US military and economic rebalance to the Asia-Pacific region, as declared by Obama and US Defense Secretary Leon Panetta at a press conference hosted by the Pentagon last January.

“There is always an economic reason for war and militarization. At the root of the US military pivot to the Asia-Pacific region is not containing this so-called threat of China, but securing economic domination over the largest market for US exports worth nearly $1 trillion,” stated BAYAN USA Chair Berna Ellorin. “JP Morgan Asset Management described the Asia Pacific as the ‘workshop of the world’ because most of the goods used worldwide are produced in the region. In order to survive the economic crisis, Washington must militarize the region to control its strategic trading routes.”

Ellorin also warned of the ongoing secret negotiations of the Trans-Pacific Partnership Agreement (TPPA), a new US-led free trade agreement, larger than NAFTA, being pushed by the Obama administration to ensure US influence over trade and commerce in there region.

BAYAN-USA is an alliance of 18 progressive Filipino organizations in the U.S. representing youth, students, women, workers, artists, and human rights advocates. As the oldest and largest overseas chapter of Bagong Alyansang Makabayan (BAYAN-Philippines), BAYAN-USA serves as an information bureau for the national democratic movement of thePhilippines and as a center for educating, organizing, and mobilizing anti-imperialist Filipinos in the U.S. For more information, visit www.bayanusa.org